The Aorus X9 DT eschews the minimalist ethos that so many 15.6-inch laptops are hewing to today. This is a gaming laptop, and it isn't shy about advertising that fact to the world. It is all aggressive curves and angles, complete with RGB lighting that peeks out from the edge of the laptop.

There have been some changes coming from the preceding X9 laptop however. Gigabyte has ditched the GeForce GTX 1070 SLI configuration in favor of a single GeForce GTX 1080. I like this move, because SLI can be quite problematic. In addition to the high power consumption, you can also run into issues such as micro-stuttering. Furthermore, performance is very much dependent on SLI profiles being added on the driver side for the games you play.

So while there’s technically been a decrease in graphics performance, I consider this a good move overall. After all, the laptop’s 17.3-inch display has only a 1,920 x 1,080-pixel resolution, which the GeForce GTX 1080 is perfectly capable of handling in just about any game.

The IPS display itself also sports a 144Hz refresh rate and NVIDIA G-Sync, so you’ll get a smooth and tear-free gaming experience. The difference is already noticeable at your desktop

Another nice feature is the X-Rite Pantone certification, which supposedly means more accurate colors. I didn’t verify this using proper testing equipment, but to my eyes at least, colors were reasonably vibrant and nothing seemed off to me. My only complaint would be the rather low peak brightness, and I found myself running the notebook at maximum brightness all the time.

The audio system now supports Dolby Atmos, but they’re honestly nothing to get excited about based on what I heard from the notebook's built-in speakers. Still, the laptop does feature an ESS Sabre Hi-Fi Audio DAC, so you’ll probably want to use headphones with it instead. 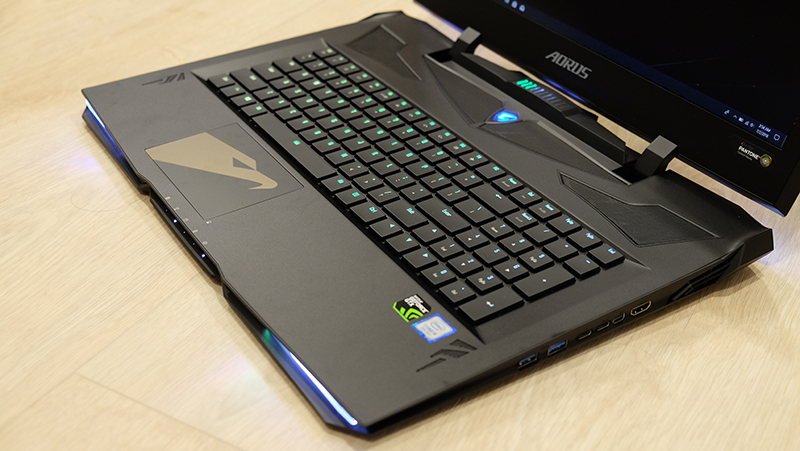 What I do like is the laptop’s mechanical RGB backlit keyboard. I’d expect nothing less from a laptop of this caliber, and the keyboard provides great feedback, nice travel, and is a pleasure to type on. I like that Gigabyte went with tactile switches here as the clicky switches found on some gaming laptops can be pretty noisy and disruptive. On top of that, you also get per-key lighting controls for some truly fine-grained lighting customizations as well.

There are up to nine independent RGB lighting zones that you can customize on the laptop. In addition, you get an RGB heads-up display of sorts above the keyboard that is color-coded to display specific system information, such as fan speeds, temperature, or even battery level.

It’s excessive for sure, but I guess you can’t blame Aorus for trying to cram everything it can into the X9 DT, given the price it’s charging.

The trackpad is similarly excellent. It isn’t a Windows Precision Touchpad, so some gestures like the four-finger tap to open the Action Center won’t work, but it still feels responsive and accurate.

The overclockable Intel Core i9-8950HK processor is a welcome addition as well. The hexa-core chip sports a markedly higher 2.9GHz base clock compared to the Core i7-8750H’s 2.2GHz, and you can overclock it using the Command & Control utility. However, there actually isn’t that big a difference in performance between the default settings and the highest overclocking level. 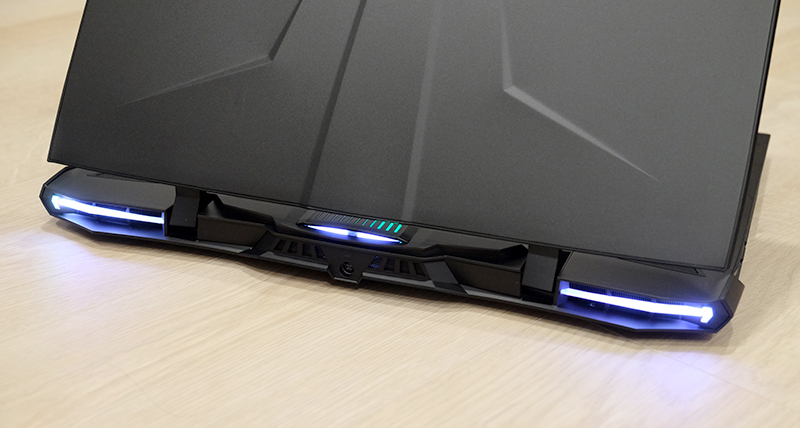 All that powerful hardware needs to be kept cool, and the Aorus X9 DT sports no fewer than four fans. These draw in air through the bottom and exhaust them through vents at the sides, working in tandem with eight heat pipes to keep the crucial components running cool.

In addition, Aorus provides fairly extensive software controls for the fans. You can create your own custom 15-stage fan curve to suit your preferences, but the fact remains that the fans get very, very loud. They’re so loud that I wouldn’t even call them annoying. They’re downright invasive, and you’ll definitely need headphones to drown out the fans.

Finally, you get a wide range of ports and connectors for all your devices. This includes one Thunderbolt 3, two USB 3.1 (Gen 2) Type-A, one USB 3.1 (Gen 2) Type-C, and one USB 3.1 (Gen 1) Type-A port. There’s also a UHS-II SD card reader for speedy transfers and a Mini DisplayPort 1.4 and HDMI 2.0 output. In sum, this means you’ll be able to output to three displays at once and use the laptop as a true desktop replacement.