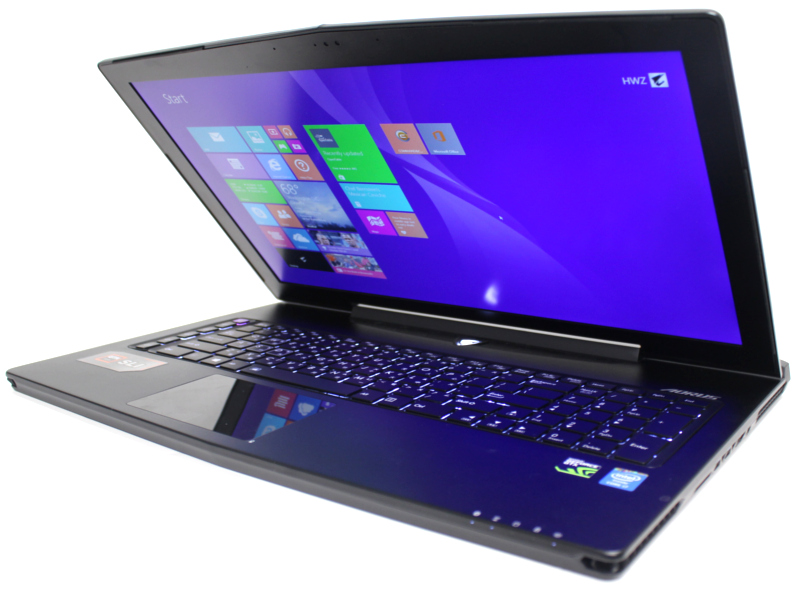 When you think about buying a gaming notebook, you think about massive graphics and display (usually that of the 17-inch class). Of course, big processing power with cooling capabilities is a must if you want to support a visually stimulating gaming experience. Even so, if you don't moderate on your hardware requirements, you'll end up with something as astronomical as the Dell Alienware 18, which, for the record, is 57mm thick and 5.6kg heavy. That's way too hefty to be hauled around, and understandably, gamers would rather forgo lugging around a 5.6kg machine just for bragging rights.

So that brings us to the topic of 17-inch portable gaming machines where you'll inevitably mention the Razer Blade Pro, and maybe the less decorated MSI GS70 Stealth. Well, here comes some serious competition, in the form of the Aorus X7. If you're scratching your head and wondering why you haven't heard of the Aorus brand until now, here's why: Aorus is Gigabyte's new subsidiary that was officially introduced to the world at the CES 2014, where the brand debuted by unveiling its X7 gaming notebook. Aorus has since further inked itself in the gaming peripherals market, having pushed out the Thunder series of mechanical gaming keyboard and MMO gaming mouse. How will the X7 fare against gaming notebooks manufactured by more established brands like Razer and MSI? In this review, we find out if the Aorus 17.3-inch gaming flagship model makes the cut.

The Aorus X7 has already managed a feat, by packing not one, but a pair of NVIDIA GTX 765M graphics chips (that's pretty much on a par with a GTX 780M GPU) in an incredibly slender chassis that's only marginally thicker than most Ultrabooks. It's not the first to implement NVIDIA SLI graphics though - Aftershock Titan and Dell Alienware 18 have done so, but piled on substantial weight because they integrated a top tier CPU and corresponding top-end dual GPUs that require a more robust cooling subsystem (Aftershock Titan tips the scales at 3.9kg).

Powered by an Intel Haswell i7-4700HQ processor with 16GB DDR3L memory running at 1,600MHz, it offers dual 128GB mSATA SSDs setup in RAID to cut loading times to a minimal, and 1TB (5,400RPM) of hard drive space to store your games and other content. What's more, it has four memory slots for you to expand the memory subsystem if you need more stamina tor juggle several simultaneous applications or larger graphics/video editing tasks.

Surely now we're not the only ones that are impressed with Aorus cramming all that glorious muscle in a gaunt body. But, before we jump the gun, let's first thoroughly assess our review unit. Here's the full specifications list of the S$3,599 Aorus X7:- 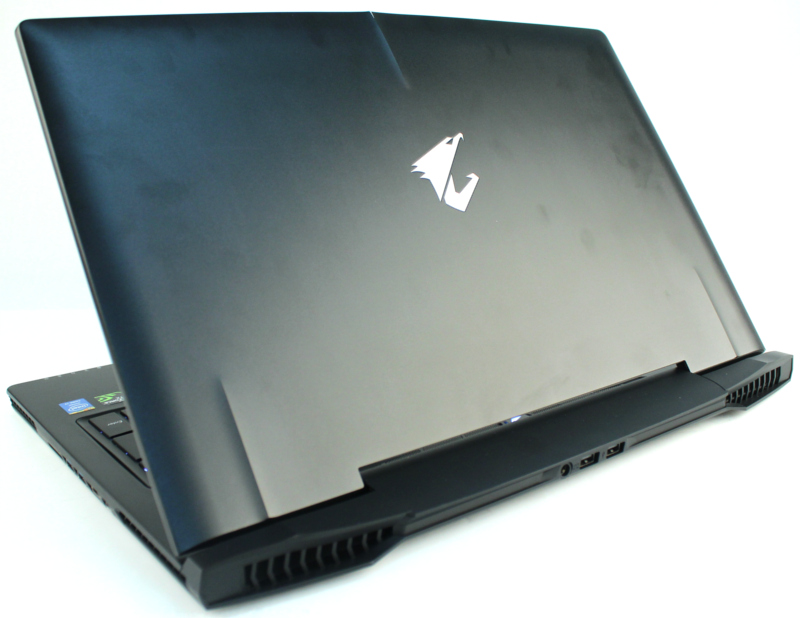 In contrast to its overwhelming specifications, the X7 undeniably exudes minimalism, with an unadulterated, aerodynamic silhouette. It also sports sculpted lines and three molded ridges around its full aluminum matte black chassis. While it's 22.9mm lean profile might not be the thinnest frame around (the Razer Blade Pro bests it with a 22.4mm slim profile and retains the title as the slimmest 17-inch gaming notebook, but runs on only a single graphics chip), the 17.3-inch X7 notebook's understated beauty tips the scales at a healthy 2.9kg, making it rather travel-friendly just in case you prefer using your own system than one of those gaming desktops you find in LAN gaming centers.

No doubt the X7 ranks high in our charts for its subtle design, but, like we mentioned earlier, cooling proficiency is instrumental, especially for a notebook as slim as the X7. In order to ensure that heat generated while gaming does not jeopardize the gaming experience, Aorus has incorporated its exclusive Thermal+ technology, which includes a total of four side and rear vents, five thermal pipes, and two fans. These were built to provide optimal air flow efficiency, and we think they served their purpose. At least, our wrists weren't scorched throughout our week-long usage of the notebook. 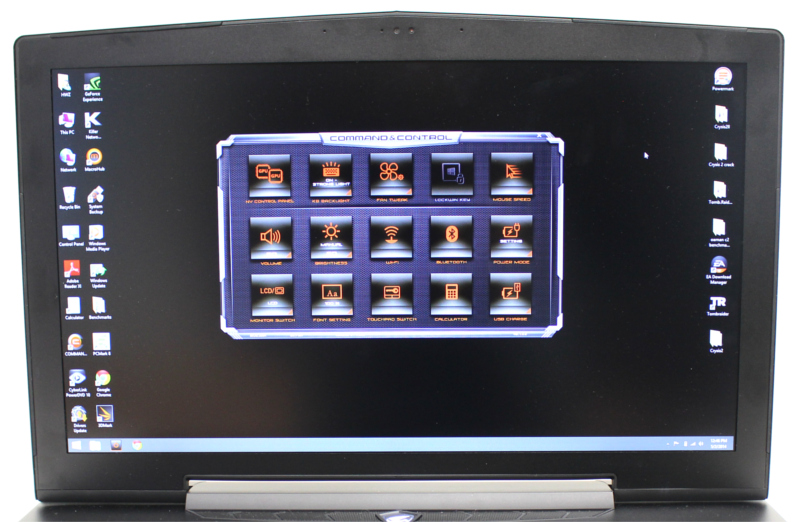 Additionally, the Command & Control software on the X7 (more on this as we move along) lets you select between three fan modes - Auto, Stealth (for quiet operations), and Turbo (for extreme gaming) - so you can properly balance performance and system stability.

As far as we know, no notebook we came across was aesthetically perfect inside out. The X7 came very close, but ultimately it made no exception. Having said that, our only two complaints were that its exterior picked up too many fingerprints faster than we could wipe off, and the connecting hinge of the lid became surprisingly more flexible only after some usage. Eventually, the loosened hinge may pose a concern for gamers who frequently shuttle between their homes and gaming center, but it's still early days for us to draw a conclusion on that observation.

There's also built-in NVIDIA Surround technology, so you can output Full HD graphics to all three screens via HDMI outputs available on both flanks of the machine (with the notebook's screen being the center monitor). Gamers can benefit from this by enjoying a complete view of the battlefield in RTS (Real-time Strategy) games, managing their inventories and tracking their parties in their MMORPGs (Massively Multi-player Online Role-playing games), or detect their enemy's movement quicker and react before they do in FPS games. 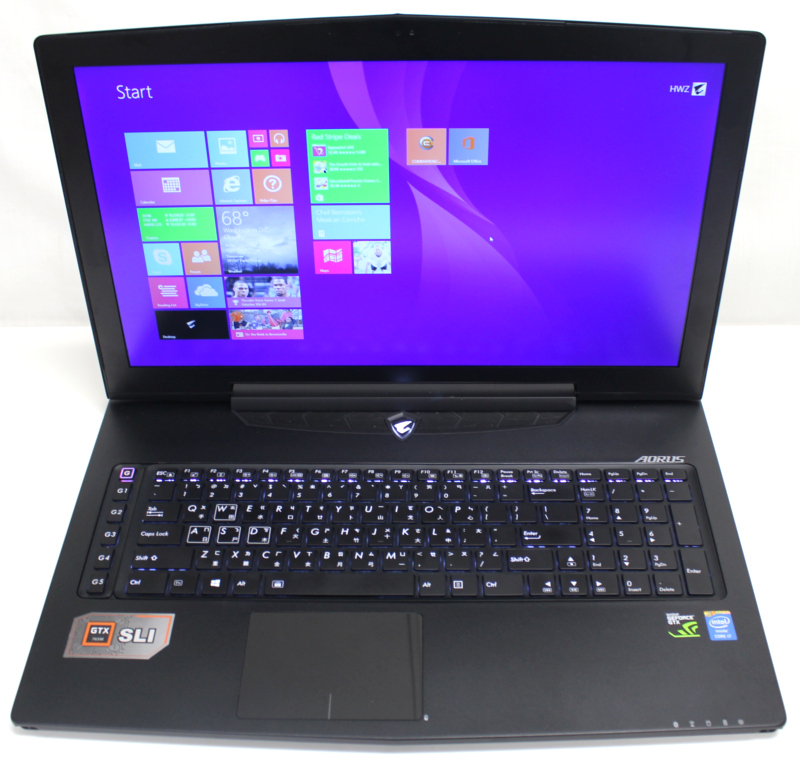 We appreciate that Aorus put in a great deal of effort in the X7 to supply better acoustic quality. The gaming notebook comes furnished with Aorus Acoustic+ technology: four speakers, including two enhanced bass units, in an attempt to increase bass fidelity. Audio is churned from both sides of the X7, and like the Dell XPS 15, sound quality is not compromised regardless of the lid's position. This means that you could hook the machine to a bigger monitor and lower the lid and still bask in the same aural experience. If you urgently need to discuss strategies on blueprints of maps with your gaming mates, there's a webcam on board so you can communicate via video conferencing.

Good audio reproduction may give you the extra edge in-game, but a good keyboard is definitely the foundation you want to build that upon. While sound is rather dependent on the headset you plug in, and movement is heavily reliant on the mouse you use, you hardly see anyone connect a separate keyboard to a gaming notebook. (Sure, you may notice professional cyberathletes hooking up their personal/sponsored mechanical keyboards to gaming notebooks provided in e-sports tournaments everywhere, but you also realize that, to begin with, visuals are already displayed on a separate monitor with each system.) 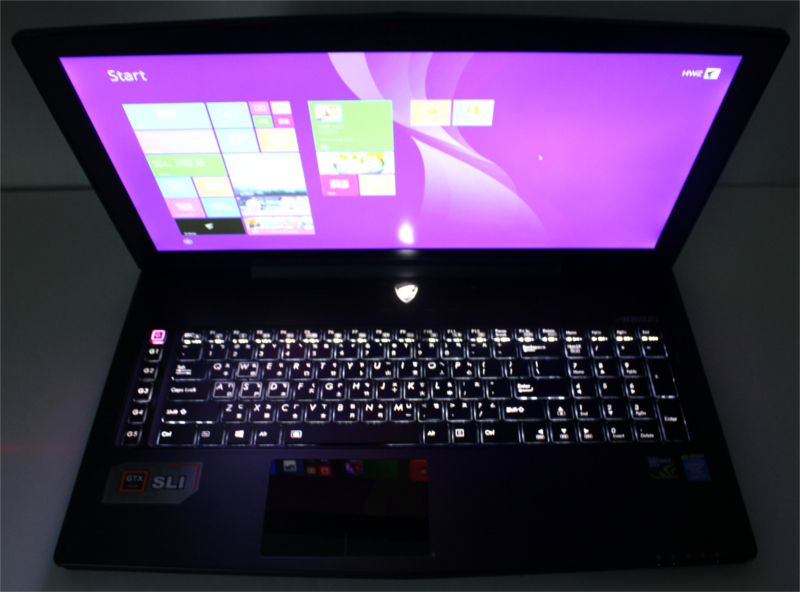 Because the keyboard mounted on a gaming machine is almost irreplaceable, chances are that you'll use it frequently, and hence, it is often seen as the crux of a gaming machine. On the X7 are G keys (macro keys) and a complete number pad, along with the rest of the keys you'll usually find on a notebook. All keys come with an anti-ghosting function, with the G keys additionally employing a scissors-switch key structure. The full-size backlit keyboard was engineered to enable a more speedy and responsive typing experience, but it took us longer than usual for our fingers to get accustomed to the whole layout.

The entire island of keys was too shallow for our liking, although some gamers will argue that they prefer minimal tactile feedback as they rely mostly on the keyboard for communication, choosing to type instead of using a microphone, so they prefer quicker registering of keys over the "key execution feel". We felt that the keys could do with a bit more elevation, but we'll rather struggle (only for a short period while getting accustomed to them at the beginning anyway) if heightening the keys meant sacrificing its skinny frame.

Now, here's something all gamers will unanimously benefit from - you can toggle between two levels of brightness for the keyboard's backlight. Certainly, this is a prevalent function, even among the non-gaming notebooks, but can you adjust backlighting using only your left hand, without moving its position at all? You can, with the X7, because its spacebar is the key you hit to do just that (of course, you have to long press the fn key first). This is useful, especially if you're gaming midway and need to make the change.

What if you unintentionally tap the Windows key while you're trying to switch the backlighting? Fret not. The Command & Control center which we mentioned earlier allows you to lock the Windows key. The on-board software also lets you do much more - select your power mode, adjust volume and brightness of the screen, or turn off the trackpad, just to name a few.

The glass-like trackpad is not centralized; it was very much inclined to the left to align with the keyboard (minus the numpad area). At first, it was arduous to game because half of our left palms rested on the touchpad, while the other half was on the interior. We initially found the position rather awkward, as our wrists had to lie on two different surfaces. This reviewer couldn't get used to the glassy experience; its surface caused some friction, and the trackpad wasn't as responsive as we hoped it to be, deviating uncontrollably at times from our intended path of navigation. Also, it doesn't detect contact if your fingertips are slightly wet, so you'll have to wipe your fingers after each sip from your chilled can drink. That being said, we're pretty positive that no gamer, professional or not, will use a trackpad to game. Besides, you can disable the trackpad, so it shouldn't be much of an issue.

The X7 houses decent connectors - three USB 3.0 ports, two USB 2.0 ports (at the rear of the X7), dual HDMI outputs, VGA (D-sub), RJ45, SD card reader, microphone-in, earphone-out (S/PDIF), and a Kensington security lock. Thanks to the built-in Killer LAN chip, gamers can look forward to minimal network latency while gaming online. Highly sought after fluid gaming is possible; gone are the days where FPS (or any game involving twitch gameplay) gamers experience frustrating lag spikes. You won't have to "teleport" in-game or find your character dead after recovering from a delay. Even the IEEE 802.11ac wireless standard is supported, so you can actually overcome wireless gaming annoyance in an appropriately supported wireless LAN infrastructure.

We're grateful for the absence of an optical drive, which we feel isn't very important to include. In fact, we feel that it is almost redundant as of late, since games are increasingly available via online stores like Steam. It would be simply illogical to jack up the X7's svelte physique just to retain a optical drive which you won't be using much of.

Write a Review
Compare This | Specifications
SLI graphics in a 22.9mm slim chassis
17.3-inch gaming machine a mere 2.9kg light
Reasonably priced
Exclusion of NVIDIA Optimus affects portability and battery life
Our articles may contain affiliate links. If you buy through these links, we may earn a small commission.
Sponsored Links