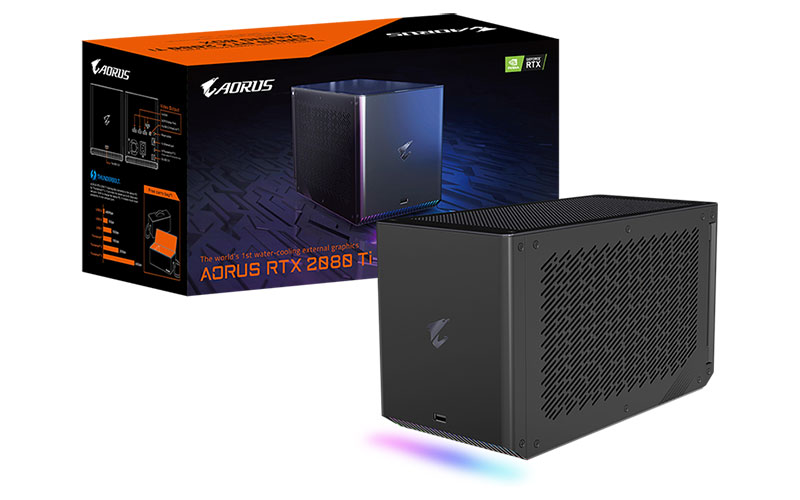 The Gigabyte Aorus RTX 2080 Ti Gaming Box isn't like most other Thunderbolt 3 docks out there. For starters, it comes with a graphics card pre-installed, so you don't get to pick what GPU you want to put inside it. The card is no less than an NVIDIA GeForce RTX 2080 Ti, but it doesn't rely on anything so mundane as air cooling. Instead, it features a closed-loop WaterForce liquid cooling system and a 240mm radiator attached to the top of the chassis.

Unsurprisingly, this very premium setup doesn't come cheap. It'll cost you S$2,269, practically the price of an entire mid-range gaming PC. The Aorus RTX 2080 Ti Gaming Box is the first external graphics dock to offer liquid cooling, and it wants you to pony up a big wad of cash to get it.

You're perfectly justified in thinking that's an insane price to pay for a graphics dock. However, you're also paying for the GeForce RTX 2080 Ti in it, which is literally the fastest gaming GPU on the planet right now. Many custom GeForce RTX 2080 Ti graphics cards already cost upward of S$2,000, so the price of the Aorus RTX 2080 Ti Gaming Box isn't entirely surprising. 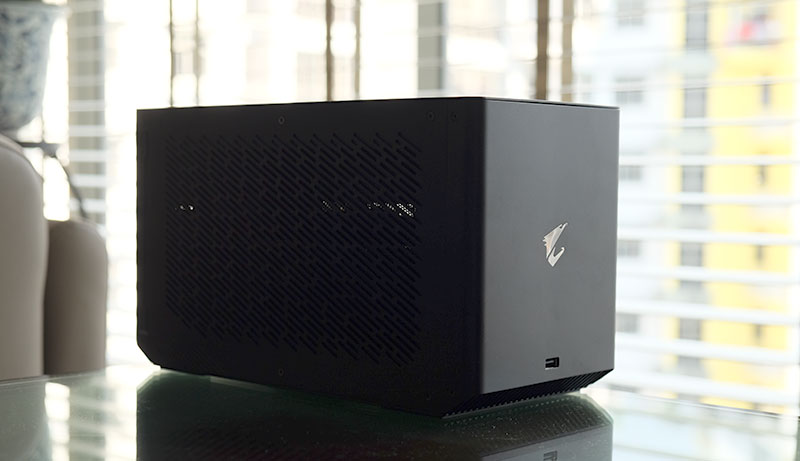 Furthermore, the Razer Core X Chroma already costs S$599 without any GPU included. If you add on the price of a GeForce RTX 2080 Ti, the total cost would be in excess of S$2,599, so the Aorus RTX 2080 Ti Gaming Box is technically the more value-for-money option.

The card inside the Gaming Box has a boost clock of 1,545MHz, the same as NVIDIA's reference specification. The company probably wants you to overclock the card though, which is where the liquid cooling system might come in handy.

It's a gaming box, but it's also a dock 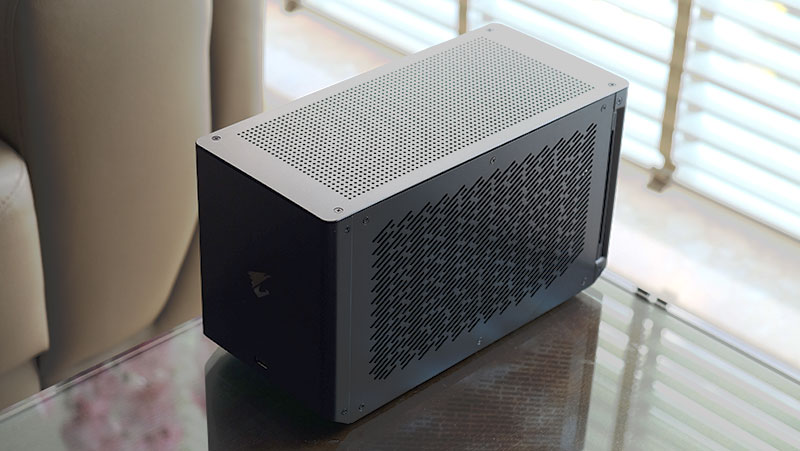 Like most other external GPU enclosures, the Aorus RTX 2080 Ti Gaming Box also doubles as a dock with a wide selection of ports and connectors. You simply plug your Thunderbolt 3 laptop into the dock, and it'll charge it and let you take advantage of all these connectors as well. The setup process was pretty hassle-free for me – I plugged the Gaming Box into my Razer Blade Stealth 13, and the dock was detected automatically once the laptop booted up, no further setup required. My one gripe would be that the bundled 500mm Thunderbolt 3 cable is way too short, and I'd really have liked something longer. 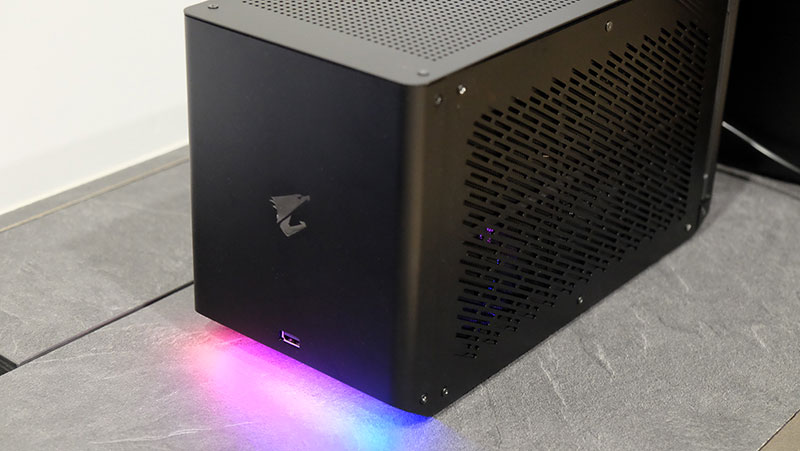 One the dock has been connected successfully, RGB lights will come on at the front. This can be customised using Gigabyte's RGB Fusion 2.0 software. However, there's no fancy see-through side panel here, as the liquid cooling system means that the insides aren't much to look at.

Instead, the side panels come with two integrated dust filters. You can slide these out easily without having to remove the panels, so cleaning them should be a breeze. 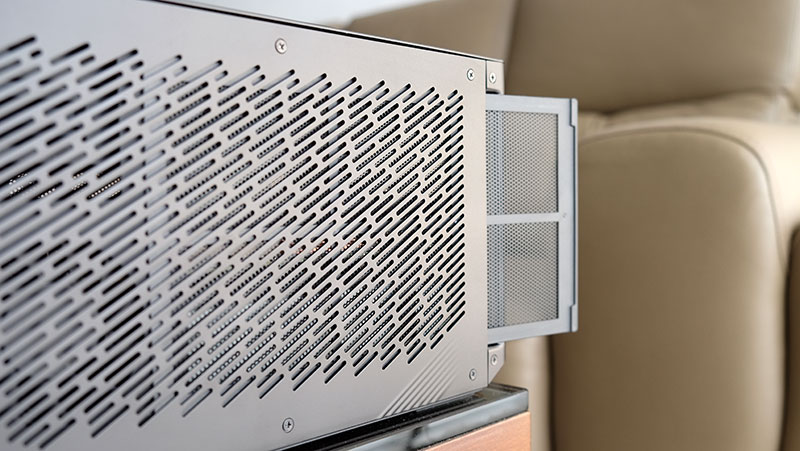 There's a single USB 3.1 (Gen 1) Type-A port at the front, so that could come in useful for peripherals that you connect and disconnect frequently, like a hard drive or SD card reader. The rear I/O is bristling with even more connectors though, and you'll find the following: 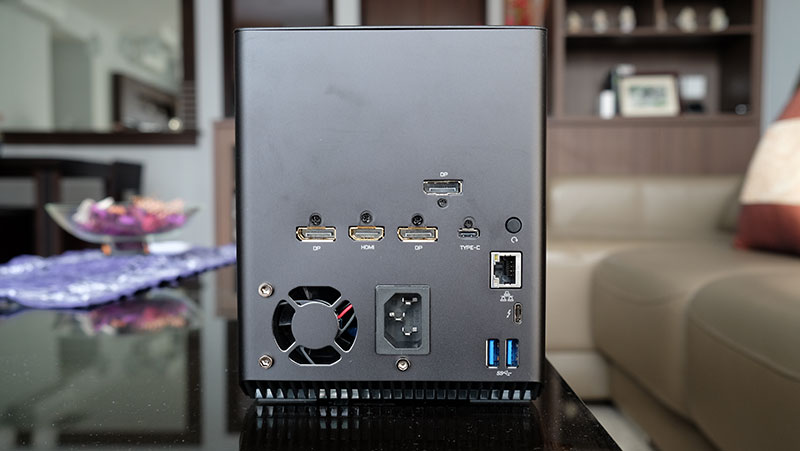 I wish there could have been more USB Type-A ports though, as you have just enough for a keyboard and mouse, and an extra port at the front for just one more device. In comparison, the Razer Core X Chroma has four USB 3.1 (Gen 1) Type-A connectors.

The 450W built-in power supply seems a little on the small side though, especially since the Core X Chroma has a 700W PSU. However, Gigabyte says the Gaming Box as a whole is only expected to draw 280W, so it believes 450W is sufficient.

Separately, the Aorus RTX 2080 Ti Gaming Box also has two Thunderbolt 3 controllers to avoid any issues with mouse or keyboard lag. This can be a problem if just one Thunderbolt 3 chip is used, but having two controllers lets the GPU connect to your laptop using four PCIe lanes of its own, while the second controller makes available PCIe lanes for the Gigabit and USB controllers.

Can I upgrade the GPU? 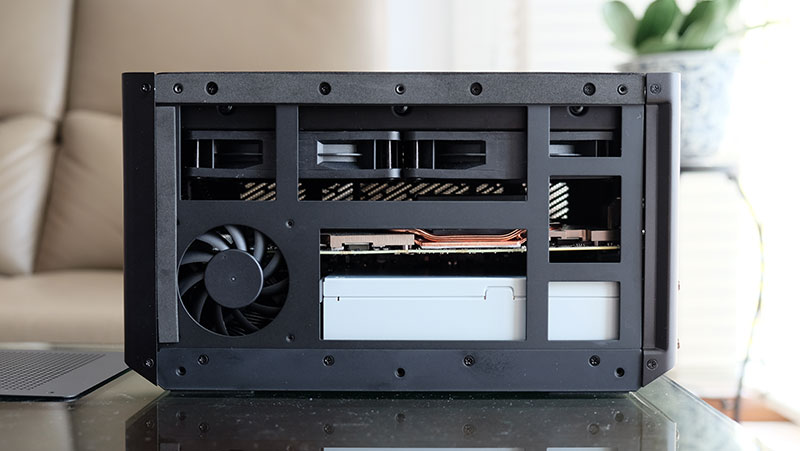 Unfortunately, no. The closed-loop liquid cooling system means that the Gaming Box isn't built to be easily upgradeable. I suppose you could probably figure something out by yourself if you know your way around hardware, but that was never Gigabyte's intention. To be fair, the GeForce RTX 2080 Ti is very, very powerful, and it'll be a long while before it even approaches obsolescence. 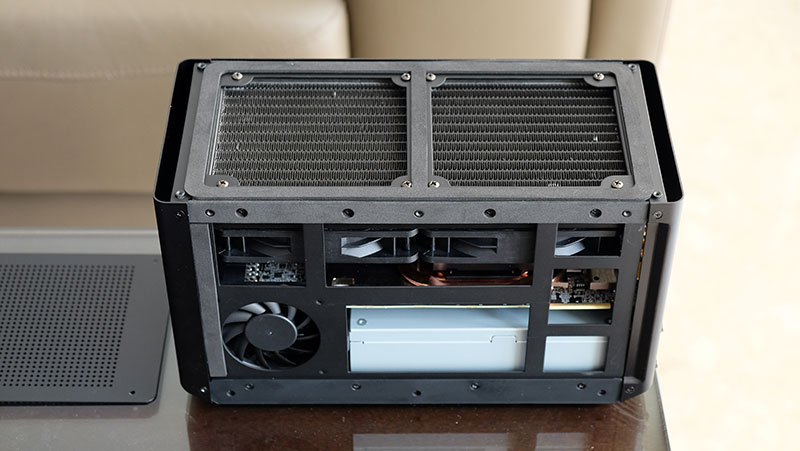 However, an external graphics dock can be thought of as a modular component of a larger setup, so it does seem slightly odd that the Gaming Box does not allow for upgrading of the graphics card. It's very restrictive, to say the least, especially for such a large investment. I suppose that's the price you pay for liquid cooling, but I might be willing to give that up if it means I don't have to junk the entire dock eventually.

Who is this for?

MacOS doesn't support NVIDIA graphics cards, unless you run Boot Camp, so the Gaming Box is pretty much limited to Windows users. It'll work with any notebook with a Thunderbolt 3 port that supports external graphics in its BIOS, regardless of whether the notebook has its own discrete GPU or not.

The Gaming Box can supply up to 100W of power to your laptop, so that covers pretty much any ultrabook on the market. 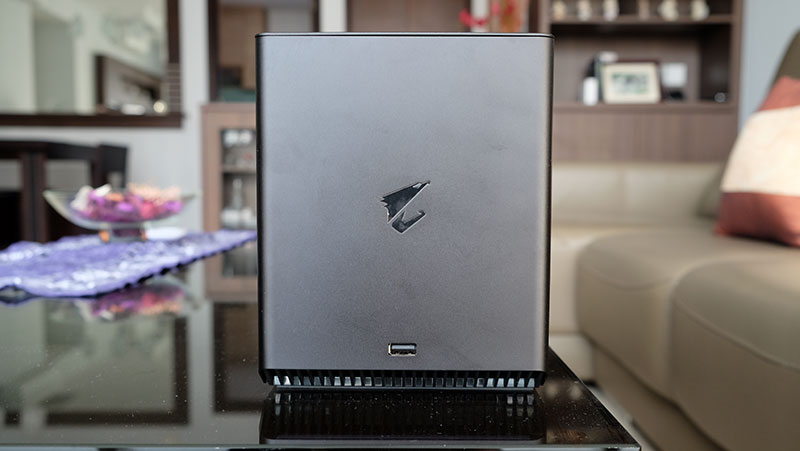 However, while there's no doubt that the Gaming Box will provide a huge boost compared to the performance you'll get with integrated graphics, it's also important to note that the GeForce RTX 2080 Ti will be severely constrained by a 15W chip like the Core i7-1065G7 (and most other Intel 10th Gen Core "Ice Lake" processors). I can see it coming in handy for someone who wants the best of both worlds though, so they get the portability of an ultrabook while on the road, and a graphics boost when they dock the laptop at home.

The Gaming Box also ships with a convenient carrying case and strap, so you can probably take it to LAN parties too.

Write a Review
Compare This | Specifications
Liquid-cooled GeForce RTX 2080 Ti is the first of its kind in an external GPU dock
Decent selection of ports and connectors
Severely limited by ultrabook-class CPUs
GPU not upgradeable
Our articles may contain affiliate links. If you buy through these links, we may earn a small commission.
Sponsored Links