The Aero 15Y did reasonably well here, beating out even the Aorus X9 DT, a beast of a notebook with the same overclockable chip and a GeForce GTX 1080. However, there weren't exactly significant differences compared to even the ROG Zephyrus and its GeForce GTX 1080 Max-Q, where the Aero 15Y managed just a small 4 per cent lead.

You'll also want to pay attention to the gaming benchmark in the breakdown of PCMark 10 Extended scores, where the Aero 15Y fell somewhere behind a full-fledged GeForce GTX 1080 and its Max-Q counterpart. 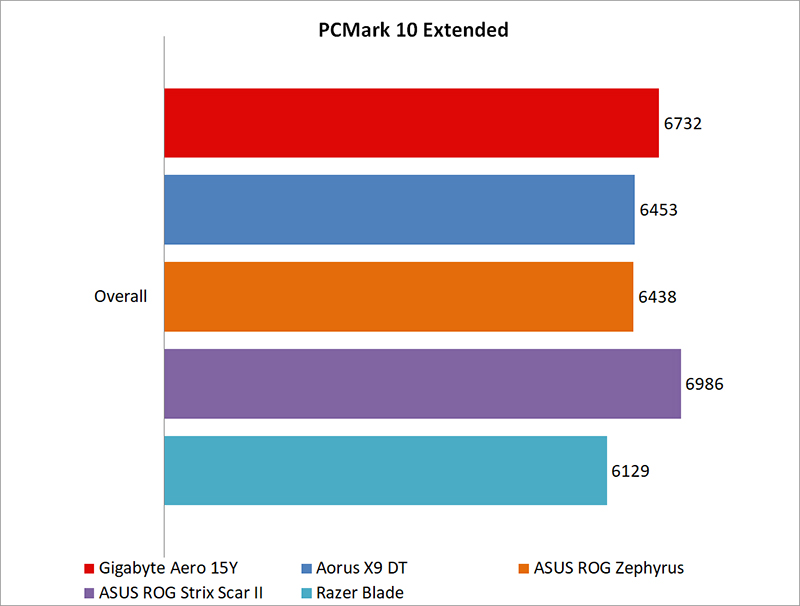 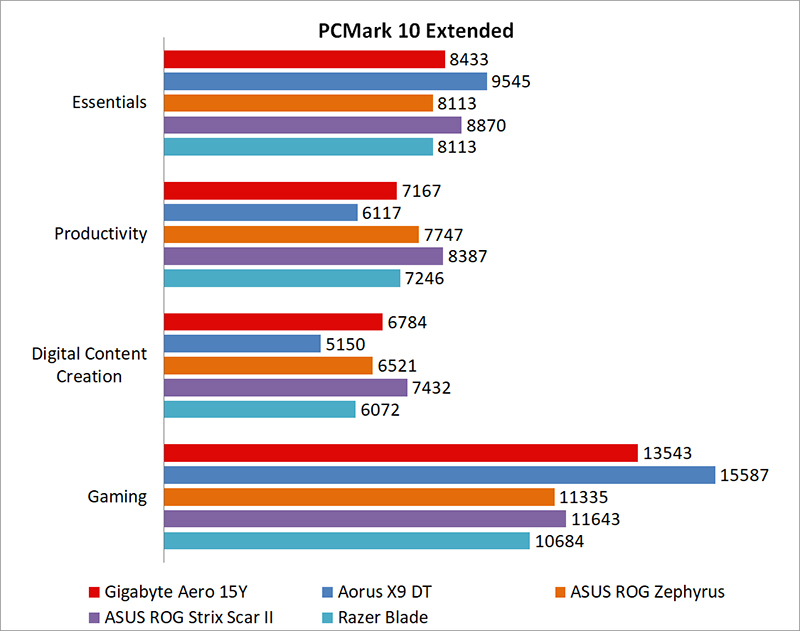 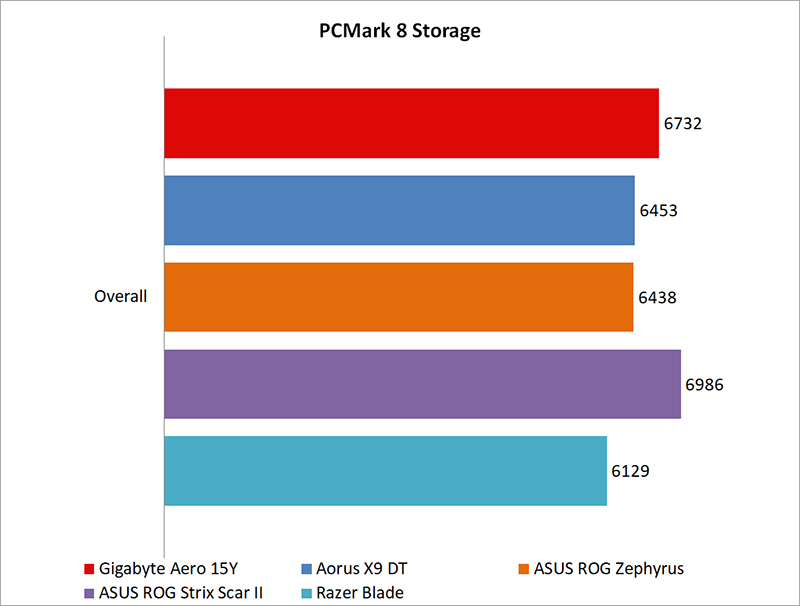 In 3DMark Fire Strike, it was roughly 14 per cent faster than the ASUS ROG Zephyrus, which is equipped with an Intel Core i7-7700HQ and NVIDIA GeForce GTX 1080 Max-Q. However, the GeForce GTX 1080 in the Aorus X9 DT was still faster than the GeForce RTX 2080 Max-Q by around 12 per cent. That said, the Aero 15Y widened its lead over the Zephyrus to roughly 20 per cent in the more CPU-intensive Time Spy benchmark, probably thanks to its more powerful CPU.

Real-world games were more of a mixed bag. The Aero 15Y did better in Mankind Divided, where it eeked out a 5 per cent lead at 1080p and High settings.

However, even though the Aero 15Y comes with a 4K display, its hardware isn't really capable of delivering a smooth experience. For instance, at High settings and a 4K resolution, the Aero 15Y managed an average of 31FPS in Mankind Divided. Things were slightly better in The Division, where it posted an average of 39.2FPS, but that's also not something I'd call a playable experience. 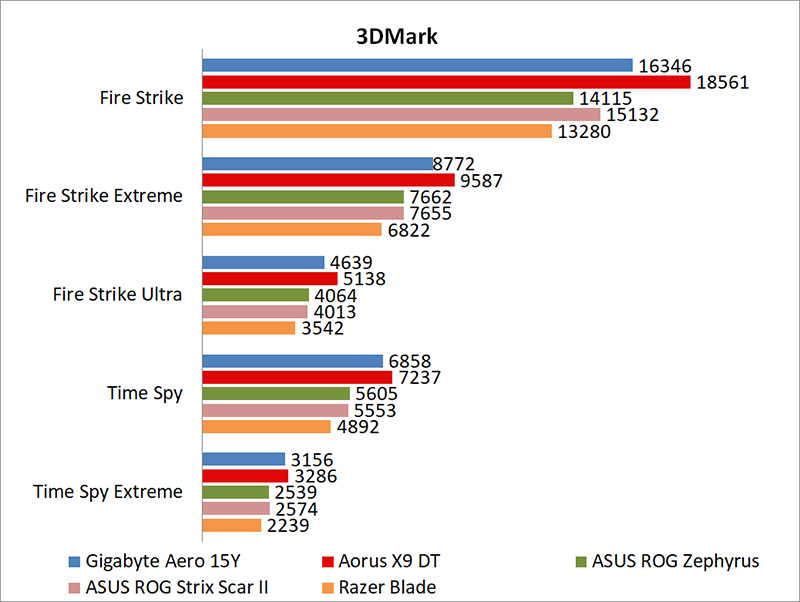 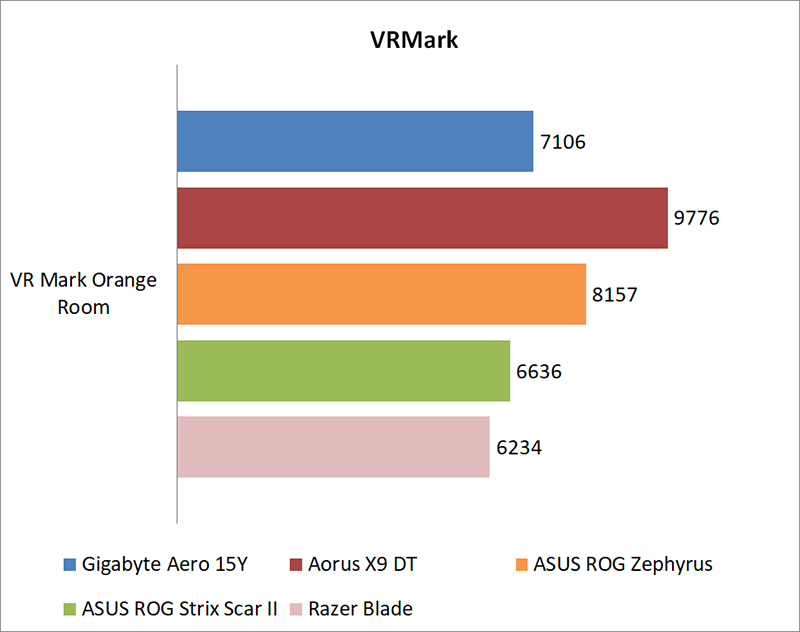 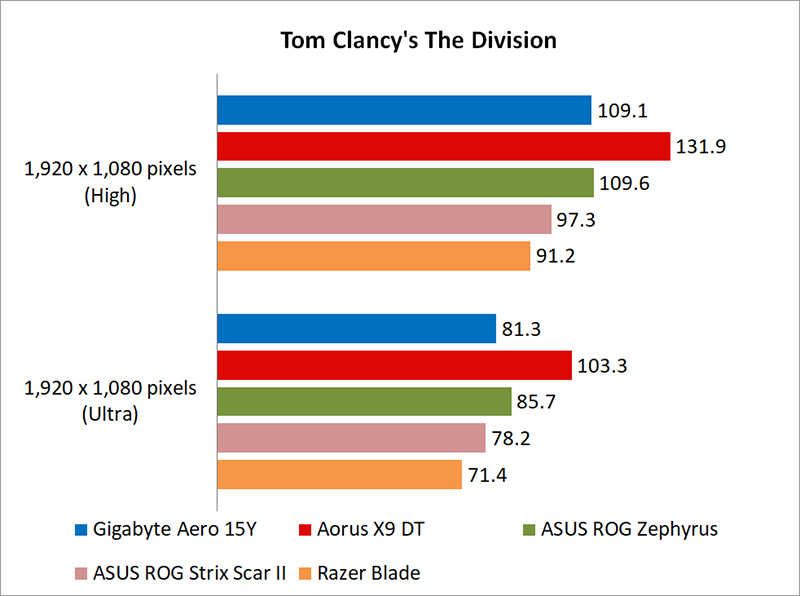 Do the AI features make a difference?

As it turns out, yes. The AI Edge mode runs locally on the laptop itself, and in 3DMark Fire Strike at least, it was nearly 12 per cent faster than when the AI was disabled. I'd refrain from extrapolating and saying that this result will apply to all games, but if you're in need of a performance boost, you can definitely try to take advantage of the built-in AI features. 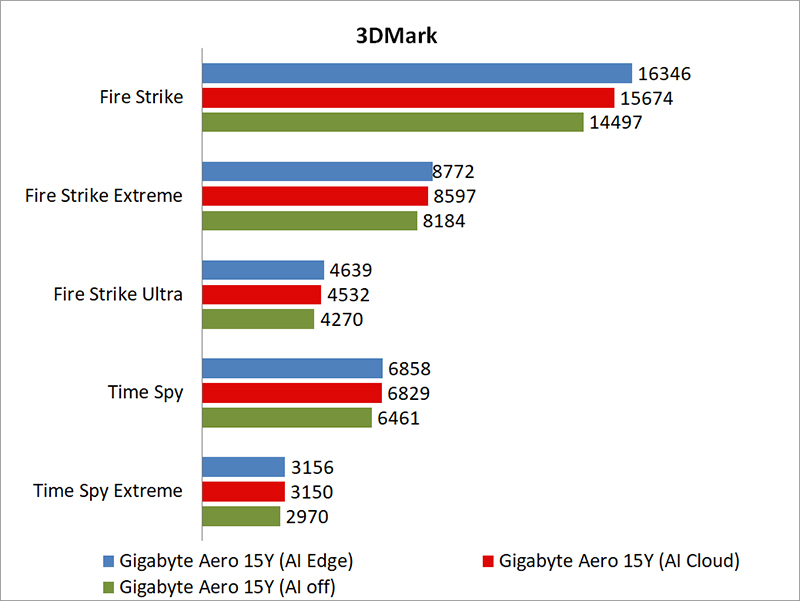 Excellent, actually. The Aero 15Y lasted over 4 hours in PCMark Home's battery life test, which is more than can be said for some ultrabooks. But this is a powerful gaming notebook, and it's impressive that Gigabyte hasn't neglected battery life and mobility. The large battery really helps here, and it remains one of the biggest I've seen on a gaming notebook. Still, Gigabyte has managed to maintain its slim form factor, which shows that there's really no reason why others shouldn't be following in its footsteps.

Many slim and light gaming notebooks end up dragged down by middling battery life, but the Aero 15Y successfully avoids this pitfall, which is why it's truly one of the most portable gaming notebooks you can buy today. 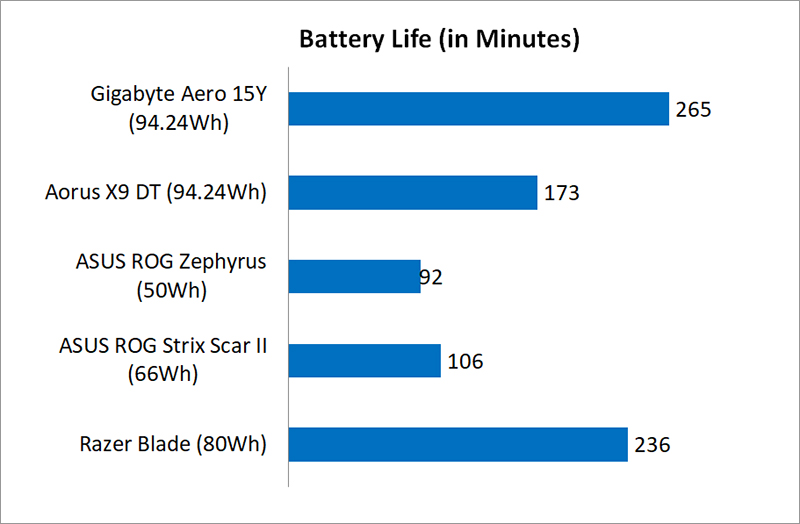 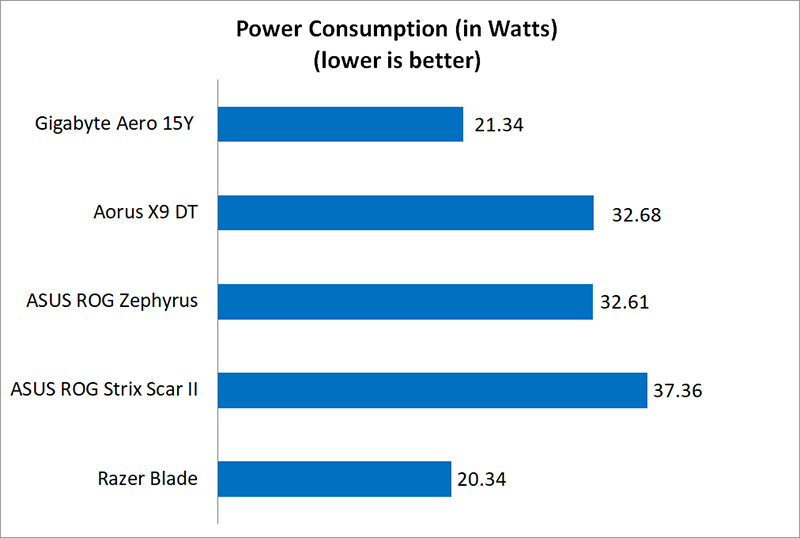 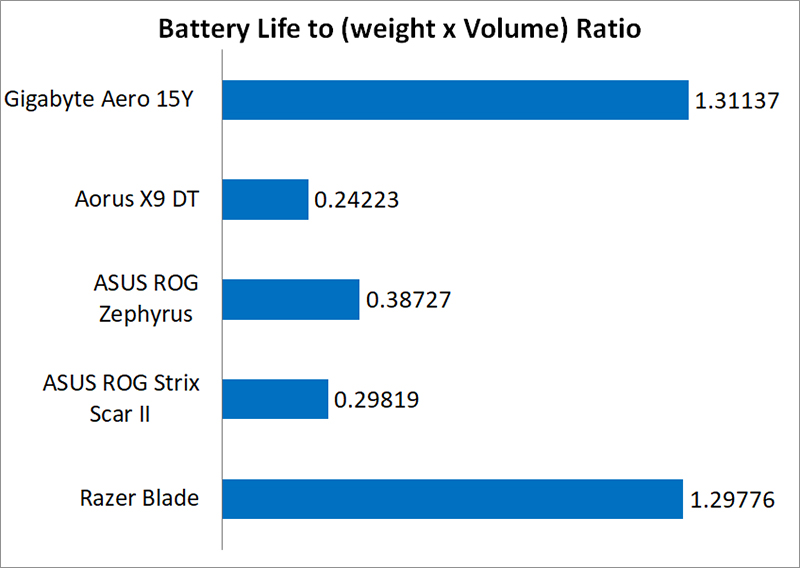 Unfortunately, yes. The Aero 15Y gets pretty hot in a room without air conditioning, and the palm rests can get pretty warm to touch. Things improve significantly when you turn the AC on though, but the area around the power button still gets really toasty.

The Aero 15Y also runs quite loud. In Gaming mode, the fans kick up an audible whir, although they're still not as loud as the ones on the ASUS ROG Zephyrus S. That said, this laptop is probably best paired with headphones to drown out the noise from the fans. Alternatively, you can put the fans in Quiet or Silent modes, but you probably should prioritize cooling while gaming.

In addition, you can set up a custom fan curve if you really want to get your hands dirty, where you'll be able to assign different fan speeds to specific temperature thresholds. 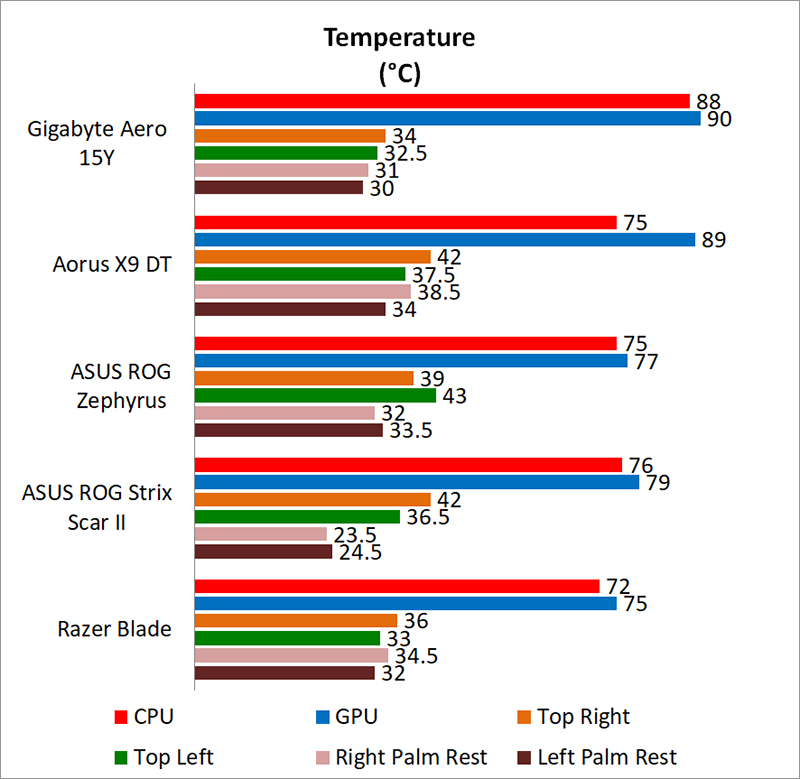 Write a Review
Compare This | Specifications
Good build quality
Excellent keyboard and Windows Precision Touchpad
Bright and accurate display
Excellent battery life and slim design
Top-notch hardware and good gaming performance
Expensive; 4K display is not the best fit for a gaming laptop
Can get quite noisy and hot
Webcam still located in bottom bezel
Our articles may contain affiliate links. If you buy through these links, we may earn a small commission.
Sponsored Links