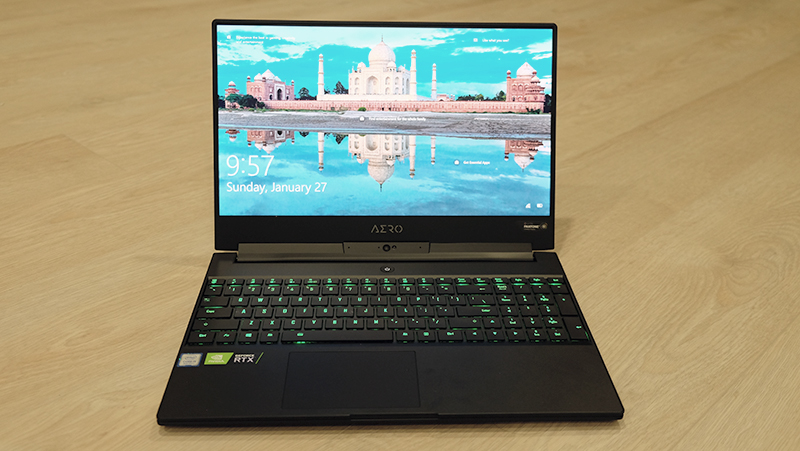 The Aero 15Y is very similar to the Aero 15X I reviewed previously, so I won't be rehashing many of the details I talked about previously. Furthermore, just as the Aero 15X offered small but thoughtful improvements over the original Aero 15, the Aero 15Y takes the same approach with a fresh round of under-the-hood tweaks that improve the overall user experience.

For example, Gigabyte has finally included a Windows Precision Touchpad on the new Aero 15Y, a long overdue change that adds a greater degree of reliability and accuracy to the built-in trackpad. Windows Precision Touchpads do really feel a lot better than third-party solutions, and they also support convenient multi-finger gestures. Gigabyte has still stuck with a small-ish plastic trackpad though, and I'd really have liked to see a larger glass trackpad like the one on the Razer Blade.

However, what really stands out is Gigabyte's decision to call attention to the provenance of the components it's using. The company is using a 4K IPS panel from AU Optronics (the 1080p models use LG panels), Samsung memory, and an Intel 760p SSD. In addition, it features a Killer E2500 Gigabit Ethernet Controller and a Killer Wireless-AC 1550i network adapter, both of which can work together to enable a maximum throughput of up to 2.783Gbps, thanks to Killer DoubleShot Pro technology. The existing Aero 15X relied on an Intel solution for networking, but Gigabyte has opted for a more gaming-oriented solution this time around. 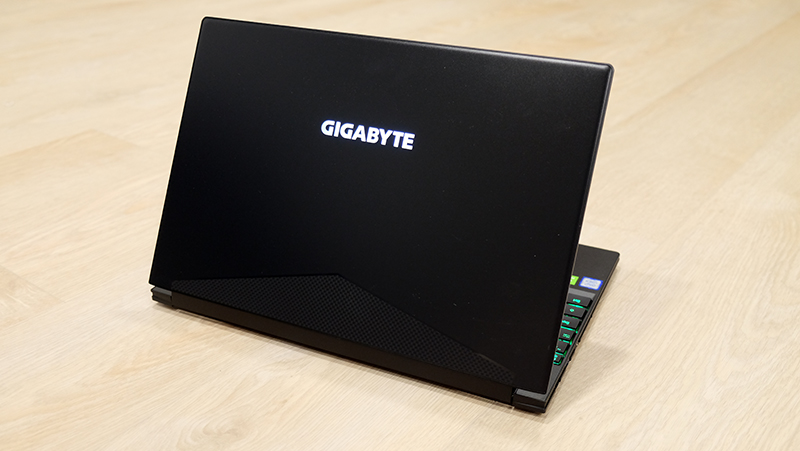 The switch to a Killer networking solution isn't that huge, and some folks still tend to prefer Intel. However, I like that Gigabyte is talking about where its components come from, and I personally find it quite a confidence-inspiring move that more manufacturers should follow.

Finally, the laptop also now ships with Nahimic 3 software, which comes with Music, Movie, Communication, and Gaming modes to suit the task at hand. You'll be able to tweak the sound signature to your preference as well, and you can adjust bass, treble, and voice levels. This is the same software that has been a mainstay on MSI's gaming notebooks for a while now.

There's also a slightly gimmicky Sound Tracker feature that superimposes a radar over your game, serving as a visual indicator of where sounds are coming from. This sounds useful on paper, but unless you're really super inept at identifying directional cues, I think most people will still leave this off.

The speakers still support Dolby Atmos, and they're actually pretty decent. They're located at the bottom of the laptop and peep out through tiny grilles, but they pump out surprisingly loud and full-bodied sound.

How does it stand out?

But now that manufacters everywhere are in the middle of releasing their GeForce RTX notebooks, the Aero 15Y is up against some stiff competition. Its key selling point is probably its support for the overclockable Intel Core i9-8950HK processor, which still isn't that common on a notebook of this size.

That aside, the display has to be one of the best parts of the laptop. The edge-to-edge bezels ensure a more immersive viewing experience, and the 4K IPS panel is a joy to look at. It is crisp and bright, and its X-Rite Pantone color calibration with a Delta-E value of less than 1 means that colors should be pretty accurate. The original Aero 15 was designed for both gamers and creators, and the same goes for the Aero 15Y as well, which also ships with Windows 10 Pro instead of Home. 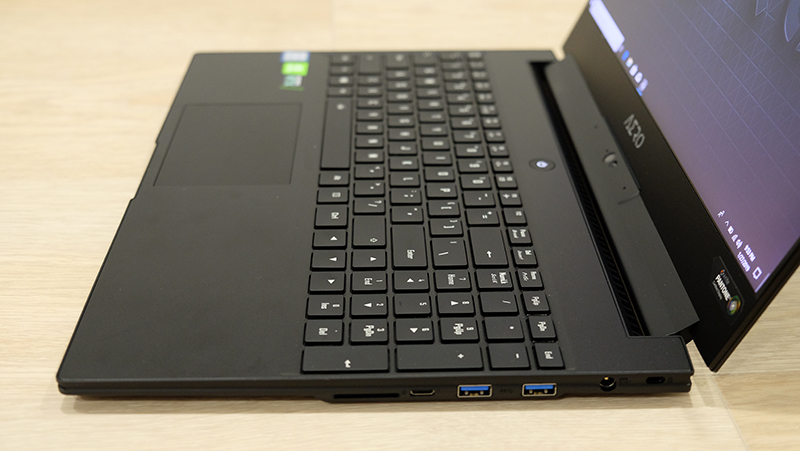 One trade-off of this design is the need for a bottom-mounted webcam, which makes for some unflattering camera angles.

However, while a 4K display sounds great on paper, it's really not that practical for a gaming system. It also drives the price of the unit up considerably, and I'd take a 1080p 144Hz panel over a 4K 60Hz display any day. Furthermore, as the performance results on the next page will show, the notebook isn't really up to the task of delivering a smooth experience at 4K, so gamers will probably end up turning the resolution down anyway.

Moving on, the keyboard deserves praise as well. It's one of the best I've used on a Max-Q notebook, and it offers good key travel and pleasantly tactile feedback. In addition, there is support for per-key RGB backlighting and you can customize the keyboard using the built-in Control Center software. Some of you may find the full-sized keyboard a little cramped, but I think it's just a matter of getting used to it. 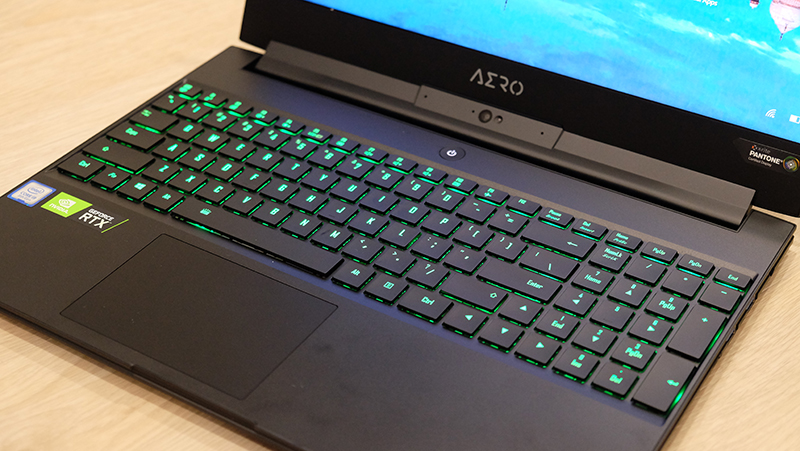 I also really like the inclusion of the full-sized UHS-II SD card reader, which really says a lot about Gigabyte's focus on content creators and not just gamers. Not a lot of business notebooks feature an SD card reader, let alone a gaming notebook, so it's really nice that Gigabyte has thought to include one. This is a feature carried over from its predecessor, and the selection of connectors remains unchanged, including one Thunderbolt 3, two USB 3.1 (Gen 1) Type-A, and one USB 3.1 (Gen 2) Type-A port. There is also an HDMI 2.0, one DisplayPort 1.4 output, and an Ethernet jack. 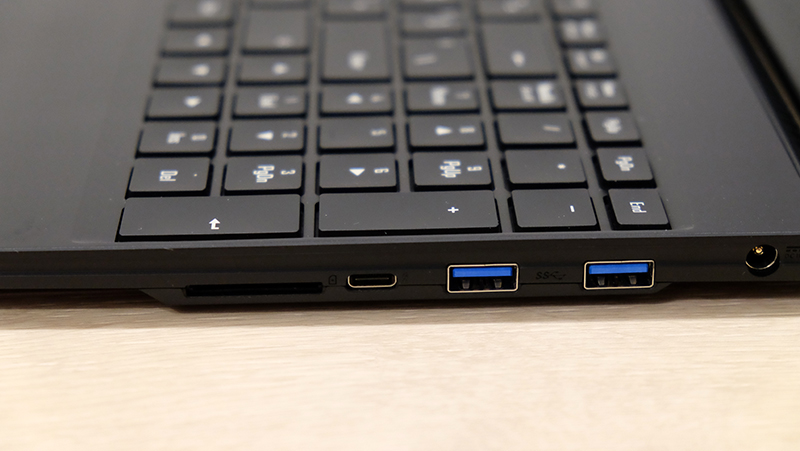 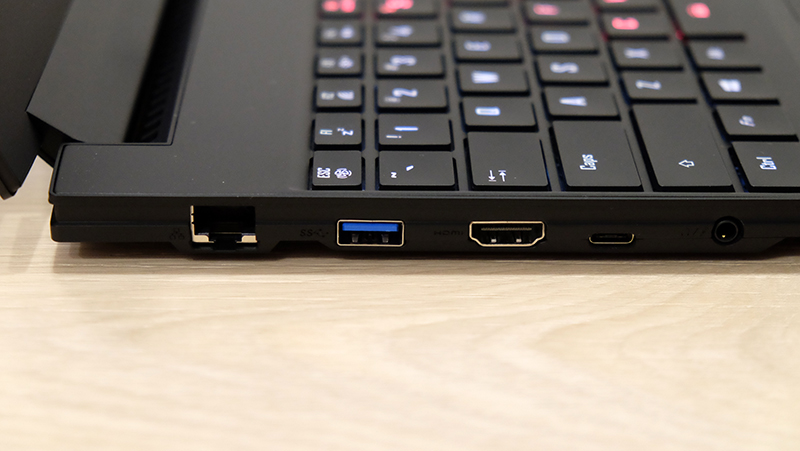 To cap things off, Gigabyte has retained the generous 94.24Wh battery on the Aero 15Y. Battery life has always been this model's strong point, and that's the case with the latest version as well. It handily beats out most of the competition, which scores it big points in the mobility department.

What's this thing about Azure AI?

But for all the talk of small, incremental improvements, the headline feature on the Aero 15Y is probably its ability to intelligently distribute power between the CPU and GPU, depending on the task at hand. It is powered by Microsoft's Azure AI, and it can supposedly reduce heat and noise by optimizing things like fan speeds. For example, if you just launched a game, the AI would allocate more power to the GPU, initiate Gaming mode, and ramp up fan speeds. But if you were working in a content editing app, it might instead divert more power to the CPU and reduce fan speeds.

You'll see the AI widget in the top right hand corner of the screen when you boot up, and you can choose between AI Edge and AI Cloud modes or disable it entirely. As you'll see in the next page, I generally observed the best results in AI Edge, which does all the processing locally on the laptop itself.

Write a Review
Compare This | Specifications
Good build quality
Excellent keyboard and Windows Precision Touchpad
Bright and accurate display
Excellent battery life and slim design
Top-notch hardware and good gaming performance
Expensive; 4K display is not the best fit for a gaming laptop
Can get quite noisy and hot
Webcam still located in bottom bezel
Our articles may contain affiliate links. If you buy through these links, we may earn a small commission.