The tesellation performance of Polymorph Engine 2.0, featured in SMX architecture of GeForce GTX 680, is put to the test against the strong contenders from AMD. The Kepler-based card from NVIDIA only managed to pull ahead from the AMD Radeon HD 7900 series at the low and middle resolutions used in our tests. It lost only its lead by a margin of approximately 5% to AMD Radeon HD 7970 at the highest resolution of 2560 x 1600 on the run when the AA settings of Unigine "Heaven" was set at 8x.

Against its own compatriots, the strengths of the GeForce GTX 680's new Polymorph Engine showed as it beat GeForce GTX 580 on all fronts of the tests. Only GeForce GTX 590 is the affirmative king-of-the-hill for the benchmark scores.

The GTX GeForce 680 hits a maximum of 1100MHz for its GPU core clock speed for the duration of the test. It ran at a temperature that hovered around 66 degrees Celsius. We observed a sharp dip in power consumption during the test; however, on the whole, power consumption remained at 92% during load periods. Given its GPU Boost level, we were a little surprised that it didn't really pull ahead of the AMD cards by a notable margin. 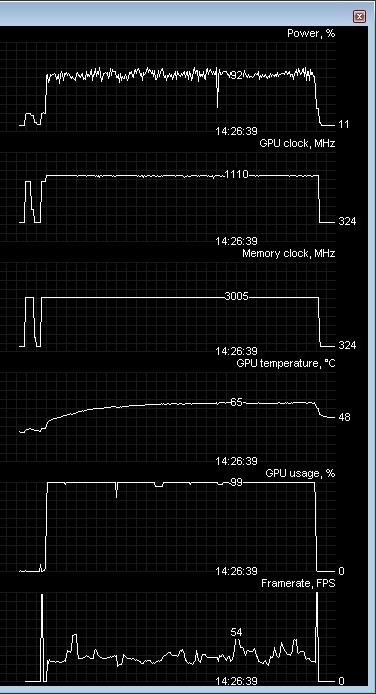