Kepler's strong showing in tesellation performance is evident again for this benchmarking test. Compared to Unigine (GTX 680's losing margin was almost 50% against GTX 590 at the benchmark's highest test settings), its performance is better as GeForce GTX 680 narrowed its losing margin to GeForce GTX 590 to about 27% when the benchmark was set at its highest resolution, with 4x AA enabled. At these benchmark settings, the GeForce GTX 680 also met its match when compared against AMD Radeon HD 6990.

For fair comparison, it beat the AMD Radeon HD 7900 series cards on almost all runs of the benchmarking software, taking the shine off their new GCN architecture that was crucial to the relative improvement in their DX11 performance. Only in the SunShafts run with 4x anti-aliasing involved, the Radeon HD 7970 was a wee bit faster than the brand new GeForce GTX 680. Seems like the Radeon cards have really pulled up their DX11 performance and are rivaling NVIDIA.

All graphs, from the monitoring logs of Extreme Precision X utility, seem to share a regular rhythmic pattern where you can figure out the pauses in the gaming benchmark to the load periods of it. The card again reaches a maximum of 1100MHz for its GPU clock speed while its power consumption hits an average value of 101% during the run of the benchmark. For the hardcore folks, do remember that you can get more out of the card from overriding its power target, but realistically, it won't go a lot higher than 110% in actual monitoring since the card has its own internal safety limits set in stone. 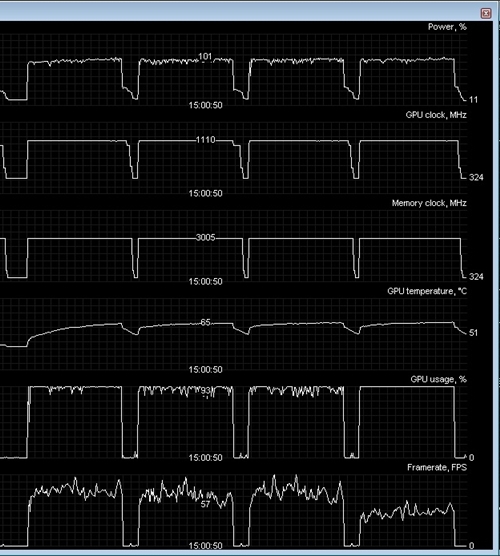