NVIDIA claims its GeForce GTX 680 is currently the fastest GPU without excessive power consumption. In fact, the reference GeForce GTX 680 graphics card has dual 6-pin power connectors and has a 195W TDP. This is perhaps the lowest TDP we've heard for a 'flagship' GPU in a long time - since 2008 when the GTX 280 debuted with a TDP past 200W (236W to be exact).  In additional to improved power consumption, GeForce GTX 680 features GPU Boost to improve its graphics performance and make full use of its unused performance potential for games that don't utilize all of the GPU's resources. NVIDIA has had various boost features in the past like LinkBoost and GeForce Boost, but GPU Boost is different.

GPU Boost is a technology that combines both hardware and software to dynamically adjust the GPU's clock speed according to the operating environment of the graphics card. It requires dedicated hardware circuitry that monitors the power consumption of the graphics card in real-time (every 100ms to be exact). The GPU Boost algorithm itself is embedded in the drivers and that means NVIDIA has room to improve it if required in future driver updates.

With such information, GPU Boost is able to adjust the clock speed of the GPU to its maximum without exceeding a pre-defined power consumption limit. Given the varied nature of the environmental inputs provided by the hardware monitoring circuitry, this means that the performance of each Kepler GPU will never be alike. More miniscule variations in its performance can be witnessed as no single GPU will operate in identical surroundings. Further to that, each GPU is unique in its own silicon make, hence making GPU Boost a truly unique performance enhancement tool. Having said that, NVIDIA did mention that while disparity will exist, it usually won't be very wide. In any case, don't expect identical performance on similarly configured systems as there are several factors that affect the level of GPU Boost performance.

For the serious tinkerers, this limit can be set by users utilizing third party overclocking utilities that use NVIDIA's API. While you can use this to get even more performance out of your card, the hardware itself has safety barriers in place and will not exceed its safe operating limits. So clumsy advance users need not worry if they would be frying their expensive toy. 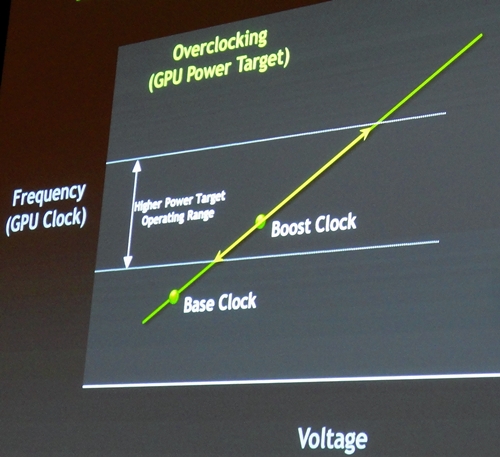 To sum up, GPU Boost is able to utilize any balance power budget and convert this to overclocking potential and boost the GPU's operating clocks. Here's a diagram from NVIDIA that helps to explain this:- 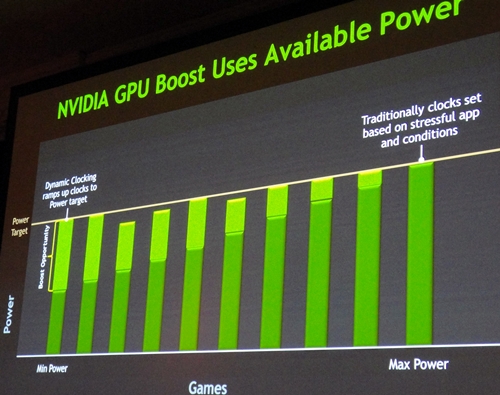 GPU Boost typically increases the clock speed of the GPU from its base clock which is defined as the base 3D frequency (GTX 680 has a base clock of 1006MHz). This is the minimum clock speed of the Kepler GPU when it is running under load from applications that will push power utilization to the TDP limits of a GPU. Of course, there are several circumstances where games are not as taxing and require less than the maximum power utilization. GPU Boost is able to take advantage of this power headroom to increase the clock frequency of the GPU to its boost clock level. The boost clock is the average clock frequency the GPU will run under load in typical applications that require less GPU power consumption. 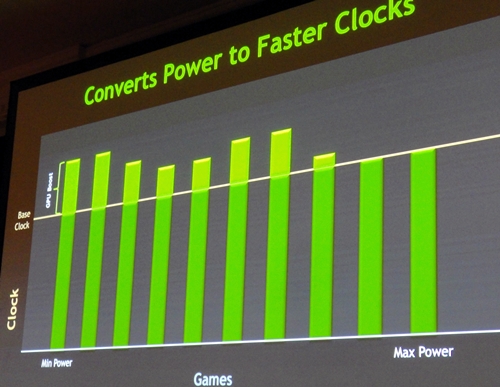 On average, the typical boost clock provided by GPU Boost in GeForce GTX 680 is 1058MHz, an improvement of just over 5%. NVIDIA claims that this is a typical conservative average as GPU Boost is capable of exceeding its typical boost clock level as long as the GPU consumes less than its pre-defined power level. We've been shown several demos where boost clocks can hit past 1100MHz. We'll share more on how the clock speeds varied in our testing later.

GPU Boost also works when the Kepler-based graphics card has been overclocked. In order to overclock the card, a new parameter called the GPU Clock Offset must be raised above zero; we shall share our overclocking experience and more about how to go about doing this later in the article. Additionally, GPU Boost will also work in an SLI configuration, though the amount of boost on each card would vary a little with differentiated loads on each card. 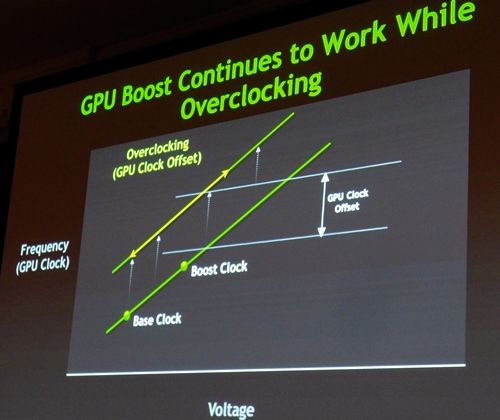 Oh and one last point on it - you cannot disable GPU Boost as NVIDIA feels anyone and everyone would benefit from a more optimally performing product. We couldn't argue with that.