We begin our performance analysis with the ubiquitous and widely-used 3DMark 11 benchmark. Here, the new GeForce GTX 680 managed an impressive 8937 3DMarks on the Performance preset, a good 16% more than AMD’s Radeon HD 7970. In fact, its score was almost on a par with the dual-GPU GeForce GTX 590 and it isn’t actually that far off from the dual-GPU Radeon HD 6990’s score of 9116, which is the highest here. Even when looking at the Extreme preset, the GeForce GTX 680 maintained its superiority over the Radeon HD 7970. Clearly, NVIDIA isn’t kidding when they said they’ve built the most powerful GPU ever.

While running the gaming benchmark, we also fired up the performance log to have a look at the card's real-time performance. The snapshot below was obtained when we ran Battlefield Bad Company 2 with the highest settings used during our benchmark run to ascertain its performance under such load. Ignore the start and ending portions of the graph since those periods correspond to periods prior and after the benchmark routine.

Notice that the GPU core clock speed hits a stable maximum of 1100MHz while its GPU usage hardly lets up at 99% during the duration of the benchmark. Power target level peaks out at 101%. Now that's effective use of the GPU Boost at work and definitely helps the card's performance too as seen from the results above. 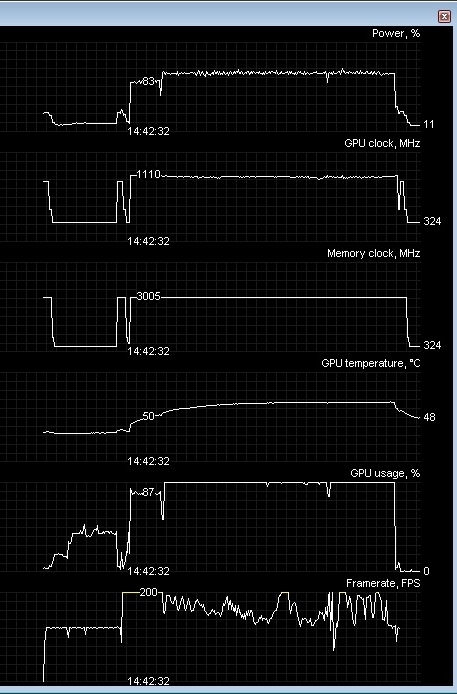