Based on our findings for the GeCube Radeon X1650 PRO Platinum, we have to conclude that the Radeon X1650 PRO is the Radeon X1600 XT made good. The most glaring flaw, that noisy reference cooler is gone for good. The increased clock speeds don't sound like much and as we found out through GeCube's mildly overclocked Radeon X1650 PRO Platinum, the performance boost wasn't much either. However, the main attraction is the highly competitive US$99 price point that ATI has promised for the standard Radeon X1650 PRO. While the eventual street price may depend on other factors (including different possible configurations), this recommended retail price should interest those who need a decent mid-range graphics card for cheap. Although NVIDIA's GeForce 7300 GT may seem like a possible threat, the faster, overclocked ones that have 256MB of DDR3 will probably cost much more than the Radeon X1650 PRO so that balances out.

With the Radeon X1650 PRO falling behind the GeForce 7600 GT in all our benchmarks, who then is the true mid-range competitor to NVIDIA's popular mid-range veteran? It seems that the answer may lie with the low profile Radeon X1900 GT. ATI has revised its price to US$249 but this is still more expensive than the typical GeForce 7600 GT (and of course much faster too). So you can probably expect a Radeon X1650 XT to be forthcoming soon to address this. After all, the gap between the US$99 Radeon X1650 PRO and the US$249 Radeon X1900 GT is a large one. 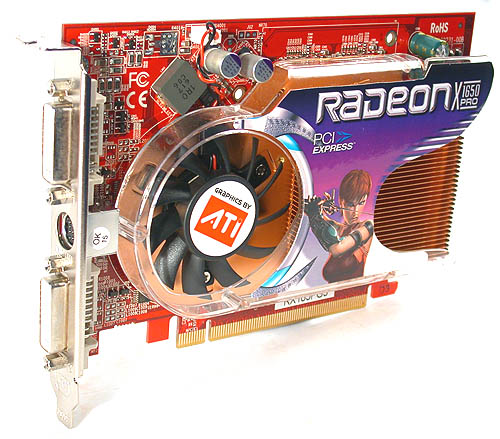 As for the GeCube Radeon X1650 PRO Platinum, let's just say that it fell short of what we had expected. Perhaps these expectations are overly heightened each time we encounter a product with a special label like Platinum. GeCube may not share the same sentiments. However, we believe that our opinions have merit - most consumers would not be too excited about a slight 100MHz DDR increase in memory clock speed, more so when this boost comes with some caveats.

First, the GeCube lacks a Rage Theater ASIC that is usually found on the older Radeon X1600 XT cards and a quick check with most of the initial Radeon X1650 PRO variants launched seem to point that VIVO won't be a standard feature. Next, the bundle of applications and software is non-existent; only graphics drivers are included. Given these flaws, would you exchange them for that minor overclock, which are easily and safely accomplished nowadays using software tools?

It just does not add up to a Platinum worthy product so we are left with its price as the final determinant of its value. GeCube told us that the retail price of this Radeon X1650 PRO Platinum would be US$155, which is substantially more than what we had expected from ATI. However, a survey of a number of other vendors has revealed that they intend to price their products in the US$140 - US$150 price bracket as well for their 256MB DDR3 variants. Moreover, it seems that the promised price point of US$99 from ATI may only be applicable to certain geographical locations like the United States and that too with perhaps DDR2 memory variants which may not be of the same configuration of this GeCube card reviewed.

It's too early to tell if the street price will indeed be more than ATI's optimistic figure but judging from the performance of the GeCube, a US$155 is definitely not going to excite consumers. With the faster GeForce 7600 GT cards going for US$170 and would probably be less now that the US$199 GeForce 7900 GS has been launched, it will be tough arguing for a US$155 Radeon X1650 PRO, overclocked or not.