The endless speculation generated by news of ATI's reworked graphics chipsets has quickly settled once the benchmark results started coming in from the usual sources (Here's our version. ) Everyone seems to be singing the same tune generally: ATI's graphics leader now belongs to the new Radeon X1950 XTX but neither its performance nor its architecture is a radical advancement over the former Radeon X1900 XTX. Instead, its distinction lies with a quieter fansink and a technological first in the use of DDR4 memory modules. To many pundits, it is the other 'new' high-end card, the reduced 256MB version of the Radeon X1900 XT that grabs the spotlight due to its attractive price performance ratio. A possible sleeper hit perhaps?

We failed to get our hands on a standard Radeon X1650 PRO graphics card but we went one better by getting the GeCube Radeon X1650 PRO Platinum. GeCube has upped the memory clock of its Radeon X1650 PRO here by 100MHz DDR and hopefully, that would make more of a difference than the cursory speed boosts made by ATI. Here's a look at this 'Platinum' card: 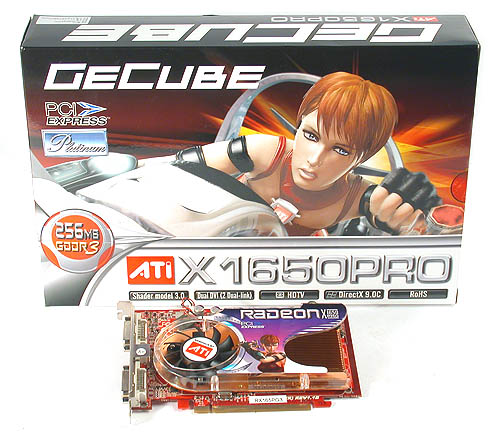