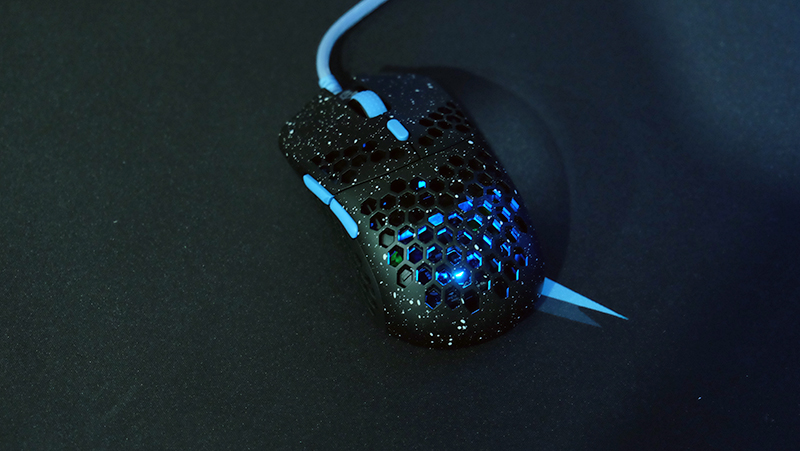 G-Wolves may not have the cachet of Razer or Logitech, but they've been consistently producing a range of solid mice for various grip styles and hand sizes. The Hati S is the latest outing from the Chinese company, and it's a tiny, super light mouse that follows in the footsteps of many of the best mice today, featuring a ultralight honeycomb shell, soft and supple paracord-style cable, and a safe and versatile shape.

The Stardust variant of the mouse sports one of the most attractive stock finishes I've seen on a mouse. The black base is dotted by white speckles, evoking the scattering of stars in a dark galaxy. This is offset beautifully by the light blue hue of the DPI and side buttons and scroll wheel. The stock cable is black, but it is detachable, and G-Wolves has bundled a matching light blue cord with the mouse that you can use instead. 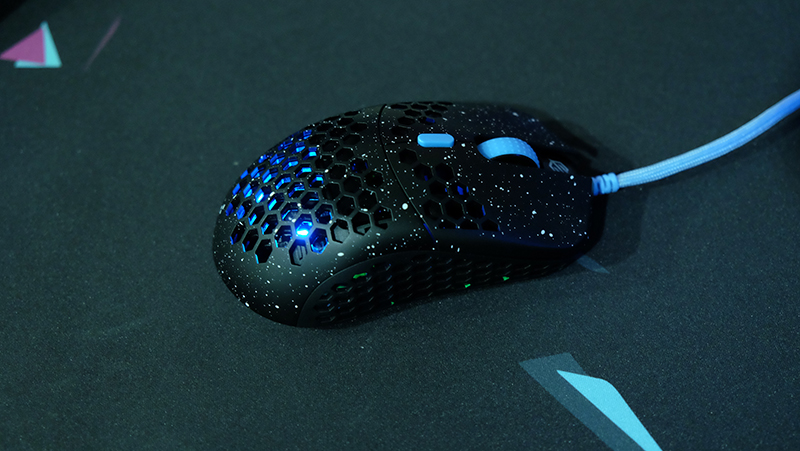 The detachable cable may seem odd at first, considering that this isn't a wireless mouse, but it does make transporting the mouse a bit more convenient. It's also a neat way for G-Wolves to add value with additional cable options, and they haven't missed out on taking advantage of this.

The shape of the Hati S is something of a hybrid between the Cooler Master MM710 and Finalmouse Ultralight 2. It is shorter than the Ultralight 2, but it is a little wider and taller, with a more prominent hump toward the rear of the mouse. It's great for the fingertip grip if you have larger hands, but if your mitts are on the smaller side like mine, the palm and claw grips work wonderfully. The sides of the mouse curve inward, so the mouse is narrower in the middle, creating also a nice concavity for resting your thumb. 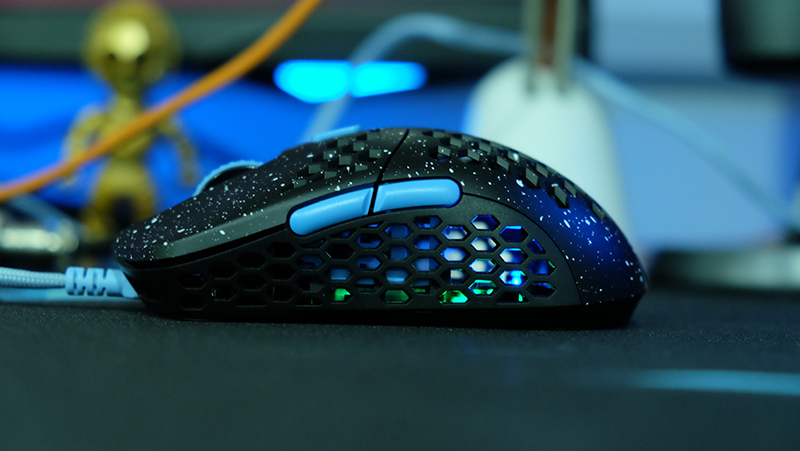 As a fingertip gripper however, I still prefer the flatter shape and narrower body of the Ultralight 2, but I would pick the Hati S over the MM710.

At a mere 49g, this is also one of the lightest mice around. To further cut down on the weight, G-Wolves has even incorporated cutouts on the front of the mouse, a pretty nifty design decision that I've yet to see elsewhere. Combined with its soft and flexible cable, it is light and agile and I had little trouble getting used to it. The mouse works fine without a bungee, but I still prefer to use one to more closely mimic the feel of a wireless mouse. 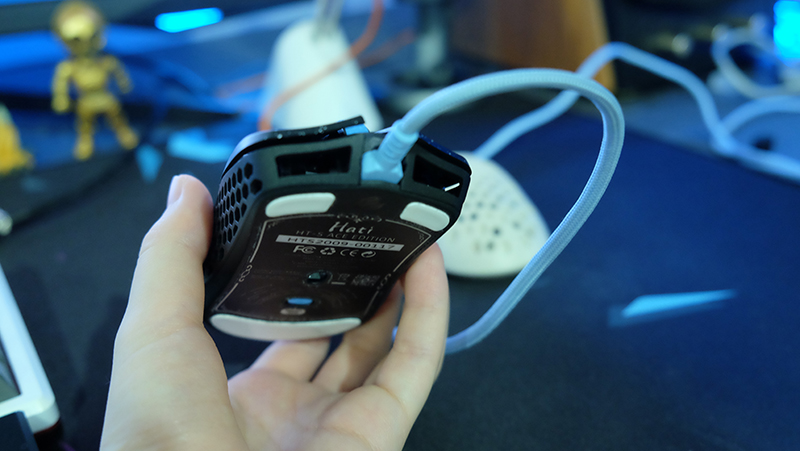 The stock PTFE feet are pretty smooth right out of the box, and there is no noticeable scratchiness. G-Wolves does ship a pair of replacement feet in the box however, alongside rubberised grips, extra TTC pink switches, and a helpful brush for dusting off the mouse, making for one of the most complete set of accessories I've encountered. The rubber grips have been custom-cut to fit the mouse. They work great if you suffer from sweaty palms, and they add only a few grams of weight.

The Hati S is equipped with a 16,000DPI Pixart PMW3389 optical sensor, widely regarded as one of the best sensors on the market. It offers flawless tracking, with no acceleration or jitter. The sensors on most modern gaming mice are almost not worth mentioning anymore since they are almost uniformly flawless, and in my time with the mouse, the sensor performed perfectly as expected. An illuminated G-Wolves logo is mounted on the PCB, and this shines through the back of the mouse. In addition to providing a measure of RGB lighting, it also doubles as a colour-coded DPI indicator, which is pretty useful. However, since I don't really change my DPI all that often, I preferred to disable the light instead. 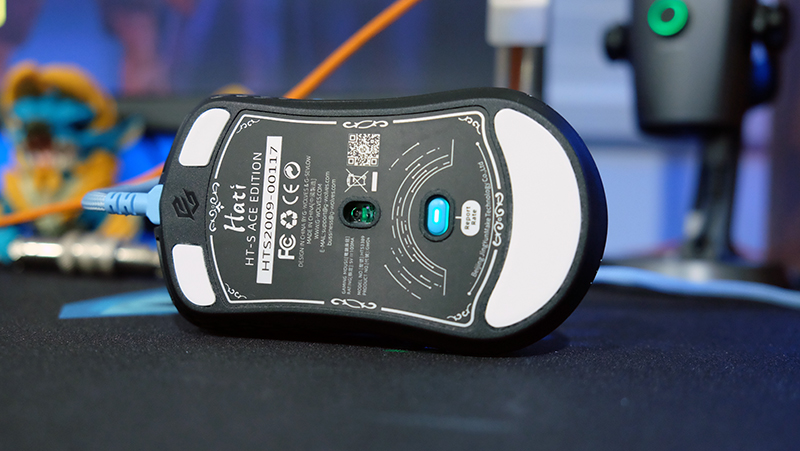 You can do this, and more, through the Hati S driver software. Your anti-virus program or Windows Defender may flag this as a malicious program, but you can go ahead and whitelist it to install it. The software offers a bunch of other customisation options as well, including the ability to adjust the debounce time to as low as 4ms, adjust the polling rate, and tweak the lift-off distance. Oddly enough, my mouse came set at a 500Hz polling rate by default, and despite the colour-coded polling rate button at the bottom, there was no way of knowing what colour corresponded to which polling rate without first downloading the driver. The interface isn't the slickest, but it's functional and works. 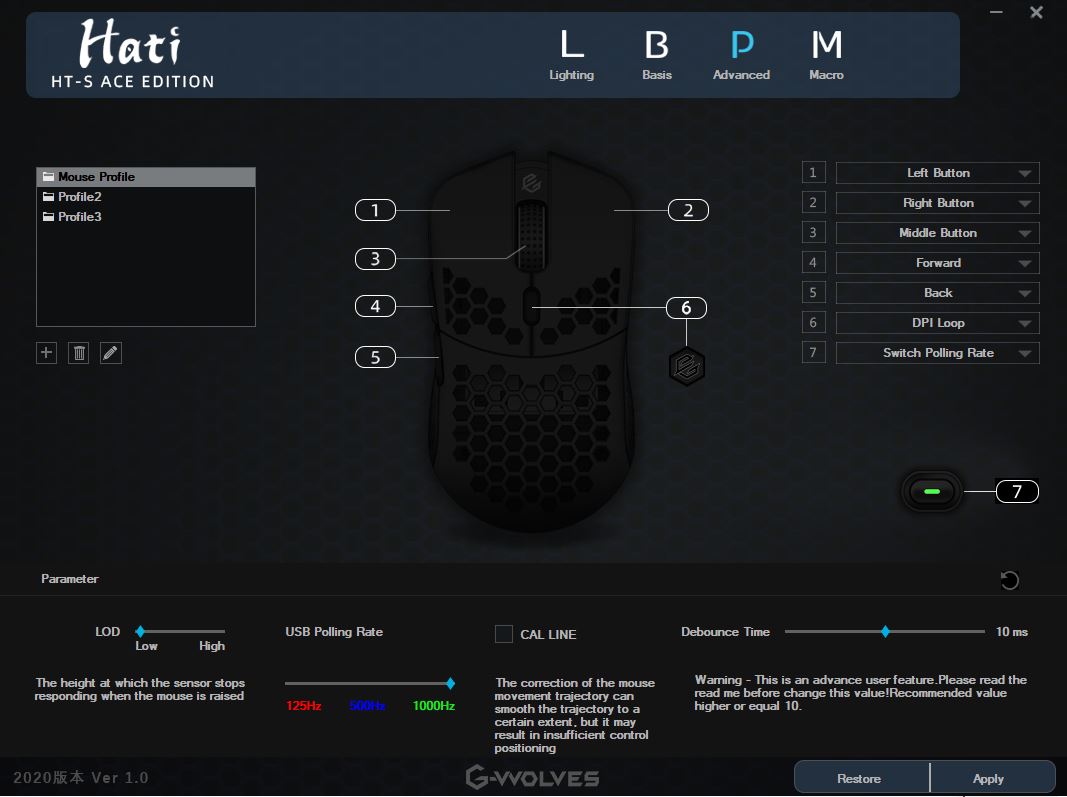 Build quality on the mouse is pretty good – there is no flexing or creaking on the sides, but I did notice some flexing on the bottom when pushing on it and a faint rattle when shaking the mouse. Fortunately, the latter two issues aren't something that you'll encounter when gaming, and I don't expect this to bother anyone much. The primary and side buttons are crisp and responsive – there is some post-travel to the left- and right-click buttons, which are Chinese Omron switches rated for 20 million clicks, but again this isn't something most folks will notice unless they're actively looking for it.

The scroll wheel is relatively quiet, featuring well-defined notches that make it pretty good to use, especially if you rely on it to switch between weapons and such. The primary buttons are separate from the mouse shell, and while there is some slight side to side wobble, it's nothing excessive. 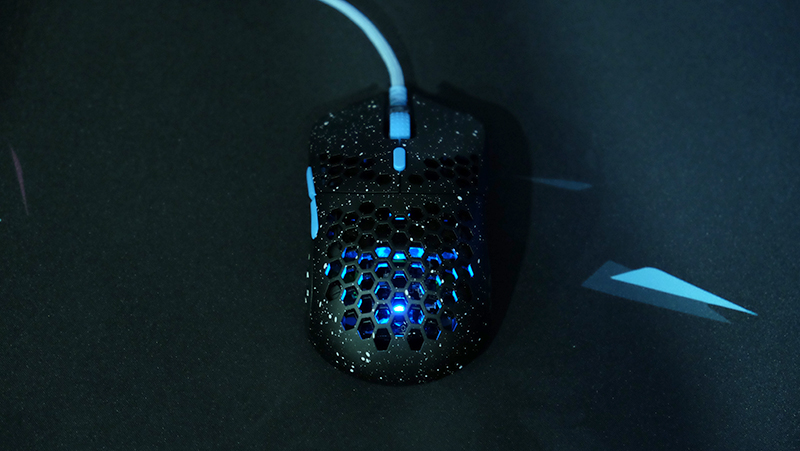 The matte plastic surface didn't give me any problems with showing off oils or the build-up of dirt and grime, but your mileage may vary if you have particularly sweaty hands. 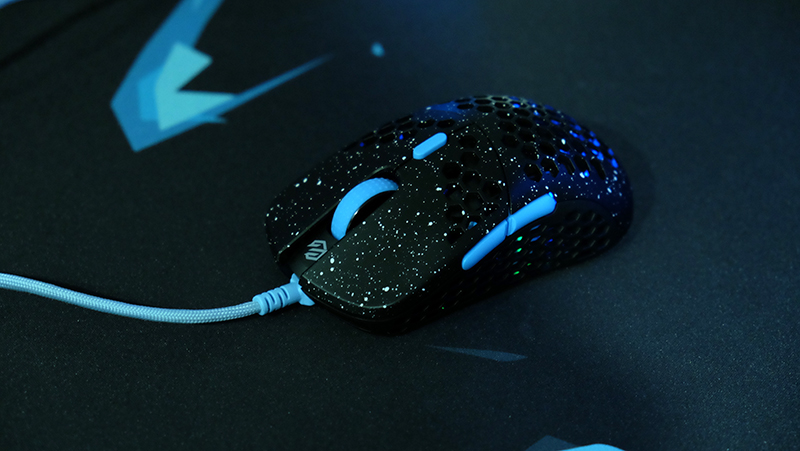 The Hati S is one of my favourite mice to date. I particularly like the unique Stardust finish and light blue cable, which really helps it stand out from the uniform crowd of black gaming mice. At just 113mm long, its small size is a great fit for me, and it offers a safe, comfortable, and relatively versatile shape that should suit most people. At US$69.90, it is quite reasonably priced, especially considering the attractive metal box it ships in and the plethora of accessories that it comes with. Most of the major manufacturers don't even offer you replacement mouse feet, so G-Wolves scores additional points in that department.

I'm hard-pressed to find fault with the mouse, and the biggest issues are probably the minor annoyances I have about its build, such as the slight rattle and post-travel on the mouse buttons. That aside, the Hati S is an excellent gaming mouse – you should definitely consider it if you're in the market for a claw or fingertip mouse.

Write a Review
Compare This | Specifications
Comfortable shape and super light weight
Flexible and supple cable
Comes bundled with a comprehensive selection of accessories
Not for everyone given its small size
Slight rattling when shaking the mouse
Driver software could use a bit more polish
Our articles may contain affiliate links. If you buy through these links, we may earn a small commission.
Sponsored Links