DDR2-750 and Notes on Memory Clocks

While the Athlon 64 X2 series can handle up to DDR2-800 memory, the key words are "up to". Since the memory controller is built into the processor, it can only handle what it has been programmed to do so. Remember, AMD only supports integer divisor numbers and the final memory clock speeds are derived by dividing the CPU clock speed with a suitable memory divisor. For example on the Athlon 64 FX-62 (and the X2 5600+), clock speeds are 2.8GHz and a memory divisor value of 7 is used to derive the base clock speed of DDR2-800 memory (which is 400MHz). 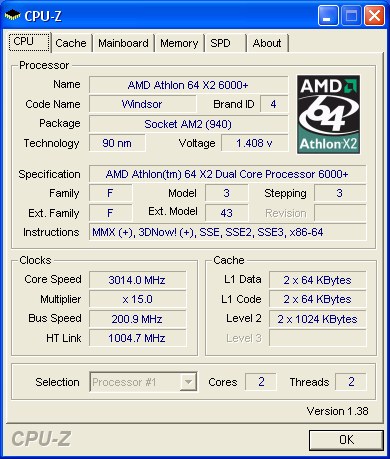 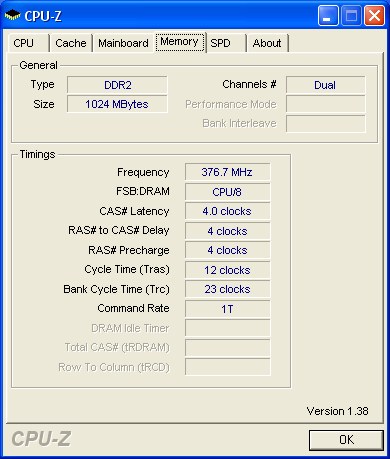 Unfortunately on the A64 X2 6000+, the 3GHz clock speed poses an issue to obtain a true 400MHz base clock for DDR2-800 memory operation. If a divisor of 8 is used, the base memory clock is 375MHz and this is what the A64 X2 6000+ uses. It can't use a divisor of 7 because it would then be overclocking the memory at 425MHz base clock; thus the processor automatically falls back to a divisor where the next highest speed is supported.

Enthusiasts should note that this less than efficient memory clock speed could affect performance in certain scenarios, but more often than not, the impact is negligible in real world use. The benchmarks in the following pages would further attest to this, but even then we did find a few occasions when the dent in memory bandwidth reduced the lead of the Athlon 64 X2 6000+ over the Athlon 64 FX-62 processor.

The Athlon 64 FX-62 was found to be a poor overclocker in our past encounters as it couldn't nudge past 3.1GHz - just 300MHz more than its recommended clocks speeds. Since the Athlon 64 X2 6000+ is based on the same core, we expected no better and our opinions were spot on. Pushing the processor to 3.15GHz is about the most stable overclock we can crank out with the stock cooler. At 3.2GHz however, we weren't even able to get Windows to boot, and that's how impractical it gets to overclock this 'new' processor. Our advice is to skip overclocking should you feel like splurging on the Athlon 64 X2 6000+. Spending more money on aftermarket coolers and other equipment wouldn't be as efficient as switching to an Intel platform for even more performance, which also gives you much more mileage as seen here and here .