There's actually nothing really new for us to convey since we've already previewed the Athlon 64 X2 6000+ in the guise of the rumored Athlon 64 FX-64 more than six months ago. Our findings today only further reinforced our earlier conclusion that the Athlon 64 X2 6000+, on average, performs slightly better than the Core 2 Duo E6600, but less than that of the Core 2 Duo E6700 model. However performance can dip below the E6600 in some scenarios. Judging by its estimated street price of just under US$500, this is still overpriced for what it offers. The Core 2 Duo E6600 retails for around US$315, while the E6700 model goes for about US$515. Now that's quite a discrepancy; from the savings obtained going the E6600 route, you can bag much better components like a speedier graphics card or a bigger monitor which directly lends its hand to better enjoyment. You can even overclock the living daylights out of the Core 2 Duo just using the stock cooler - an excellent performance to price ratio for those looking to maximize their hardware. The new AMD processor gives you no leeway for safe overclocking in our opinion when using the stock cooler (or even general air cooling for that matter). 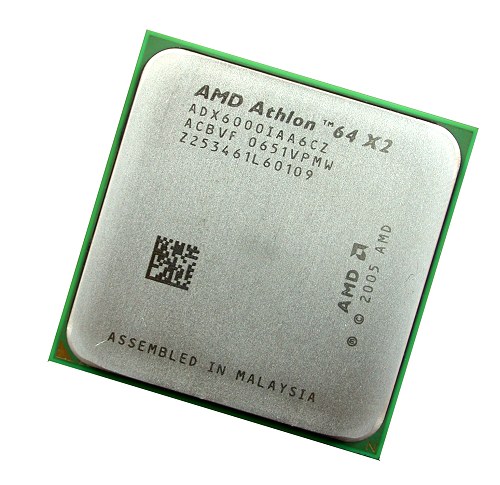 Even besides the usual price and performance comparisons that are convincing enough to steer one away from the Athlon 64 X2 6000+, the power consumption figures are also not in favor of the new linchpin from AMD. At idle, the differences are small, but if you often load your system for intense gaming sessions or lengthy processing tasks, watch out for your monthly power bill. And the reason is because the Athlon 64 X2 6000+ consumes 50% more power than Core 2 Duo processors when busy crunching away.

No doubt that the Athlon 64 X2 6000+ is AMD's personal milestone in offering a 3GHz processor for the consumers, offering up to 6% performance improvement over its FX-62 predecessor, it still falls short of being in our recommendation list. On all grounds, Intel's Core 2 Duo is still the favorable choice. One step down, the Athlon 64 X2 5600+ (which is the former FX-62) at US$325 squares off with the Core 2 Duo E6600, for which it does hold its own in some of the tests. The same however can't be said of the Athlon 64 X2 6000+ unless it retails for well below the US$450 mark.