Fujifilm X-T10: A perfect combination of price, performance and joy 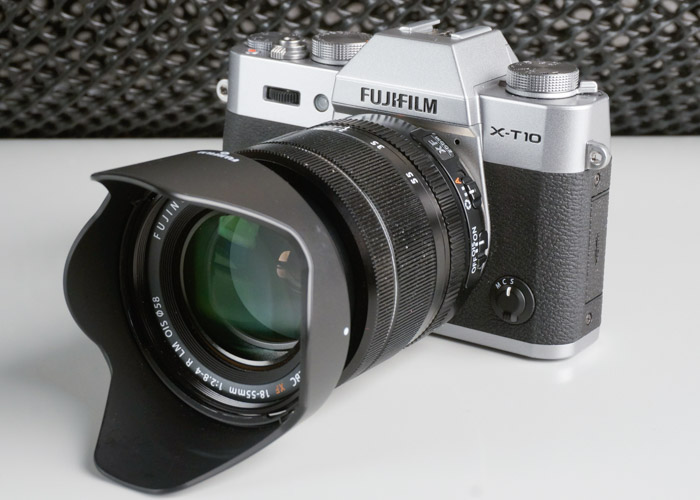 The Fujifilm X-T10 comes slightly more than a year and half after the company’s flagship SLR-style X-T1 camera, and according to Fujifilm, incorporates a lot of the feedback the company had received from early users of the X-T1. It’s a mid-class camera that should draw plenty of attention from photographers of all ages because of its gorgeous retro styling.

Take one look at the Fujifilm X-T10 and you’ll hard pressed not think of it as a X-T1 junior of sorts. The X-T10’s classic SLR styling comes complete with twin control dials and a shutter button with a port for a screw-in cable release, much like what was used back in the day.

It’s slightly smaller and lighter, but inherits the 16-Megapixel X-Trans CMOS II sensor and EXR Processor II from the X-T1, and gains an AF system that was actually better than that in the X-T1, until a recent firmware update brought that up to par. It’s also not weather-sealed, which was a key selling point of the X-T1, but of course that only applies if the camera is paired with weather-sealed lenses anyway.

The X-T10 is also a lot more affordable than the X-T1 was at launch, so you could say that it is in a sense the 5D series (in Canon terms) or the D750 series (in Nikon terms) equivalent for Fujifilm– a slightly stripped down but still entirely capable prosumer camera that hits the sweet spot in terms of price versus quantity.

While there still aren’t touch capabilities on the rear LCD, the X-T10’s LCD will tilt for those awkward angles (just like in the X-T1). However, its 3” screen comes with a lower resolution of “just” 920k dots. In fairness, that’s fairly sufficient for everyday use, but it’s a disappointing concession given the entry level Nikon D5500 has a 3.2” LCD that boasts 1,037k dots, and even the 3” LCD on the older Olympus OM-D E-M10 has about 1.04 million dots. 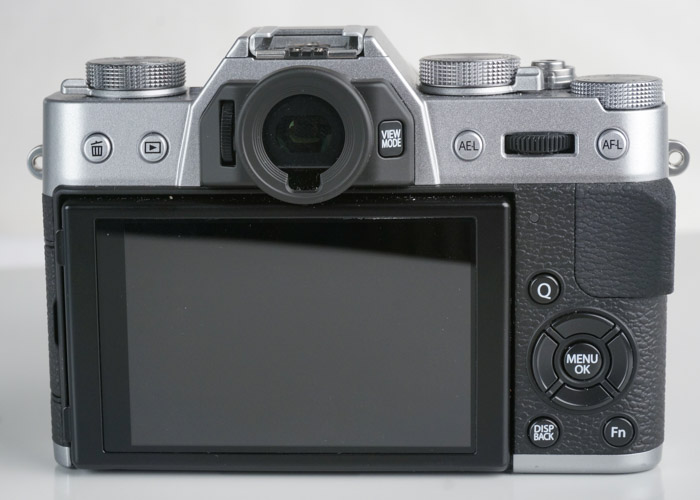 The viewfinder is also slightly smaller, being the same size as the one found on the X-E2, with 0.66x magnification versus 0.77x on the X-T1. This means you won’t be able use the dual image function from the X-T1, but the good news is that the X-T10’s Electronic Viewfinder (EVF) lag time is on par with the X-T1 at just 0.005 seconds, giving you one of the more responsive EVFs in the market.

We personally didn’t miss the larger display of the X-T1, because our larger concern was on the response time of the EVF. Colors are again fairly true to life, so we didn’t really miss not having an optical viewfinder. One of the advantages of having an EVF is that any exposure/white balance adjustments you dial into the camera will be reflected in the viewfinder, so it’s like shooting in live view mode with the advantage of holding the camera with a more stable posture; up to your face, as opposed to holding it arm’s length. 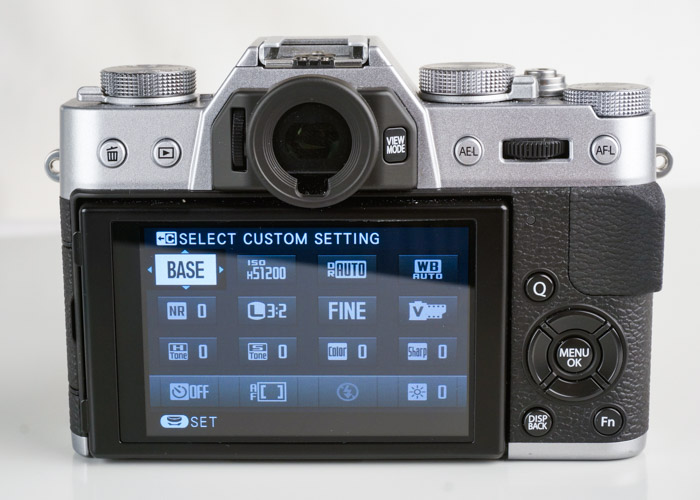 In terms of menu systems, there’s no change from the X-T1, which is a good thing. The lack of a touch screen is a bit of a disappointment as those are becoming more common, and do help a lot, but the Quick menu from the X-T1 is imported over to the X-T10, which means you can easily adjust most settings right from there. In fact, no less than 27 of the options can be assigned to the Quick menu, so this is one camera that you can certainly customize to be just the way you want it. 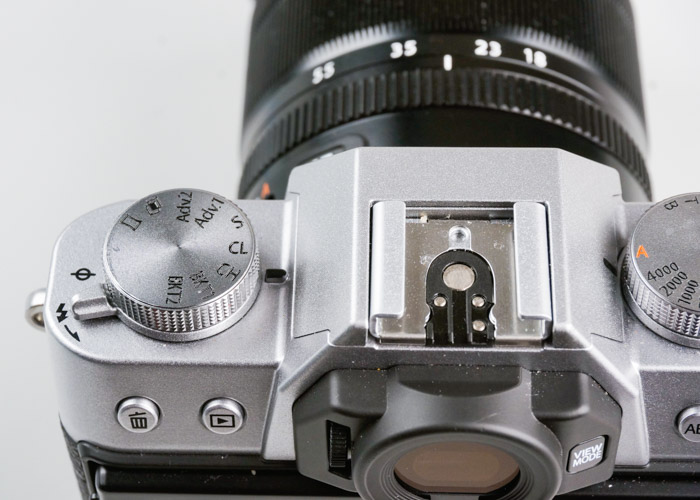 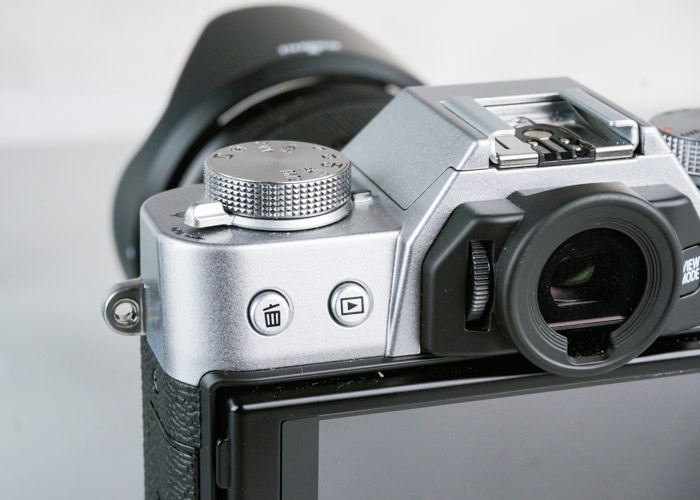 Moving on to the physical controls on the camera and you’ll notice the X-T10 is quite a bit more streamlined than its older brother. Gone is the separate dial for adjusting the drive modes; that’s now found on the mode dial. In moving to a smaller the body, the X-T10 also has had to lose the dial for adjusting ISO sensitivity, as well as the one for adjusting the metering modes. Those are important functions to have, but you can set those to spots in the aforementioned Quick menu, which is just as accessible in practice.

Under the mode dial you’ll find a small switch that raises the pop-up flash the X-T10 comes with. Personally, we welcome the inclusion of the pop-up flash, as that means one less accessory to remember and it leaves your hot shoe free for something like a remote trigger. The flash sync port in the front is also gone, so you’ll have to use a hotshoe-based solution to trigger external strobes (or use the onboard flash to trigger them via optical slave mode) if you’re doing off-camera flash work. 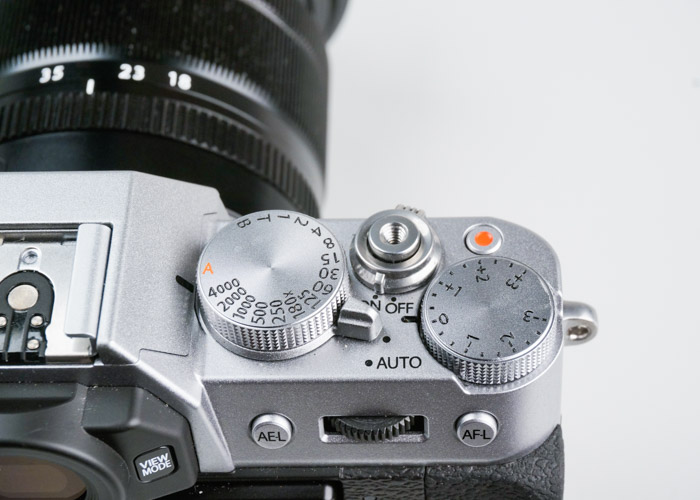 The final difference from the X-T1 is that there is now dedicated switch to put the camera in “Auto” mode (or Advanced SR Auto mode as Fujifilm calls it). Fujifilm explains this is for the times when you want to hand the camera to someone else to quickly take a photograph for you, yet want to be certain the photo will at least be properly exposed.