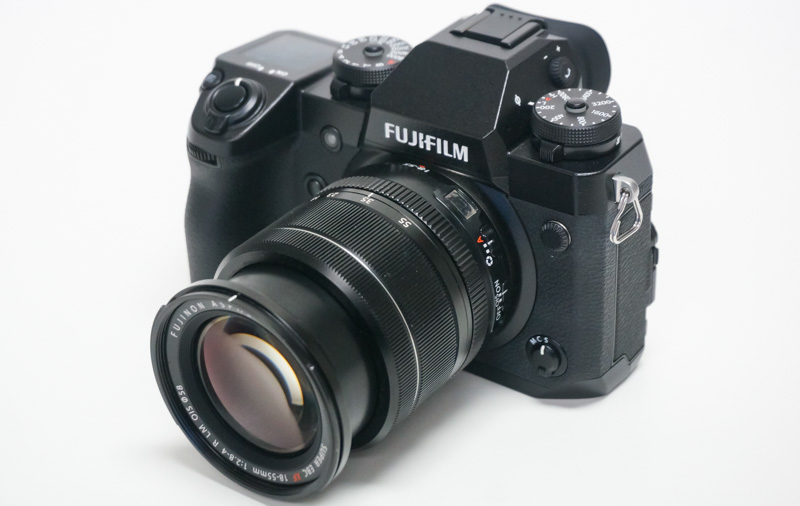 Fujifilm’s X-series line-up has evolved quite gracefully and is well defined now, with the X-Pro and X-E cameras being rangefinder-style options for professionals and enthusiasts, while the X-T series is ideal for those looking for SLR-style options. Of course, there are the large-sensor compact camera options in the X70 and the X100F, as well as the entry level X-A series which didn’t use an X-Trans sensor. Then came the medium format GFX-50S, and we thought the X-series was truly complete.

Now, we’ve got yet another series in the family – the X-H series with the X-H1. “H” stands for “High Performance”, and you could say it is Fujifilm’s attempt to maximize their APS-C sized sensor as far as it can go for both stills and video.

The video portion is particularly important, as that’s one aspect that Fujifilm has admitted to lagging behind the competition in. The X-H1 gets separate menu options for video mode, as well as a new Eterna Film simulation, which simulates cinematic film with rich shadow tones and understated colors so your grading process will be kept down to a minimum. 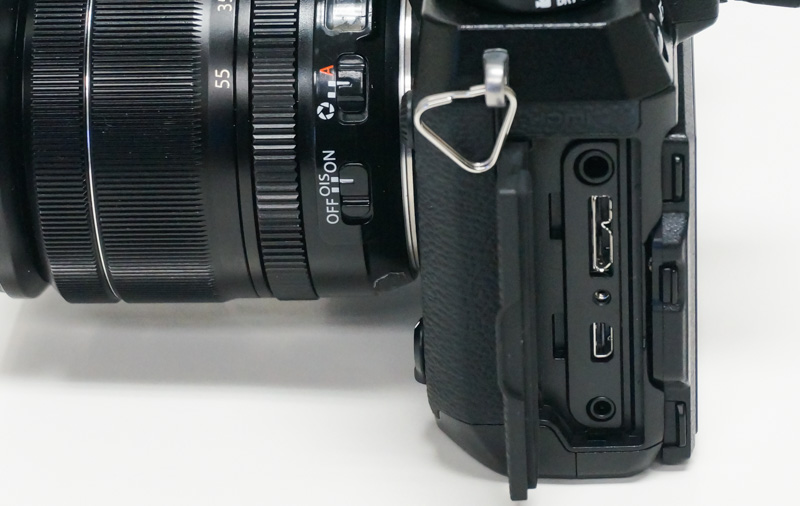 The camera also records at a high bit rate of 200Mbps, and is capable of capturing 1080/120p high-speed video so you can capture better slow-motion videos.  It does DCI 4K (4,096 x 2,160 pixels resolution) shooting, has a 400% dynamic range setting (approximately 12 stops) and comes with a high quality internal microphone (24bit/48 kHz). Of course, there's also an HDMI micro connector (type D) and a standard 3.5mm jack for a microphone, as well as a 2.5mm jack for the Remote Release Connector.

It uses the same batteries as the X-T2 before it though the battery life is slightly lower due to the drain from the IBIS system, at 310 shots compared to the 340 frames of the X-T2.  There’s again a vertical power grip option though, so you can boost battery life to a total of 900 shots in a single outing. This also contains a headphone jack, allowing you to monitor audio while recording video. 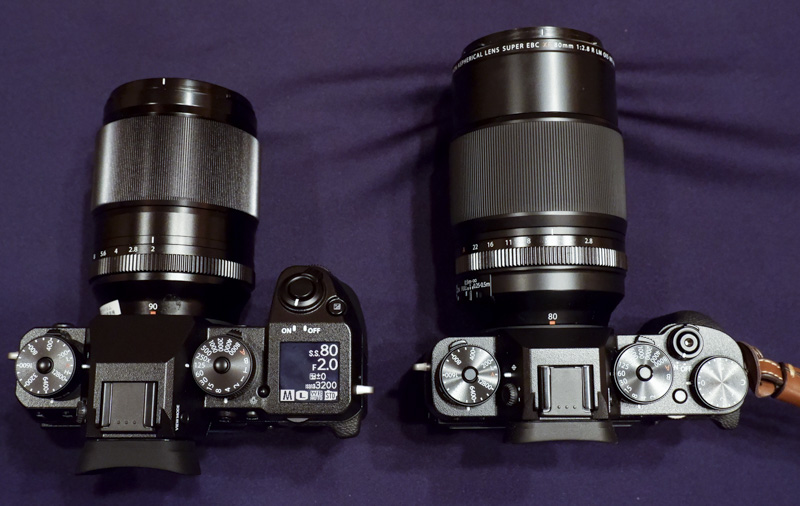 As you can see, the X-H1 is slightly larger than the X-T2, with a more pronounced grip and a slightly thicker body overall. The extra girth allows for a top display panel and a much deeper hand grip for better balance with larger lenses. This makes for better handling when longer lenses are mounted, thus giving you a very reassuring feel when using the X-H1

The top display panel seems to be the same as the one we first saw on the GFX-50S, and gives you a nice clear indication of what your key camera shooting parameters are set to. It works well in bright light and reverses from white-on-dark to a dark-on-white display for better viewing in dim light, which is a very thoughtful touch. 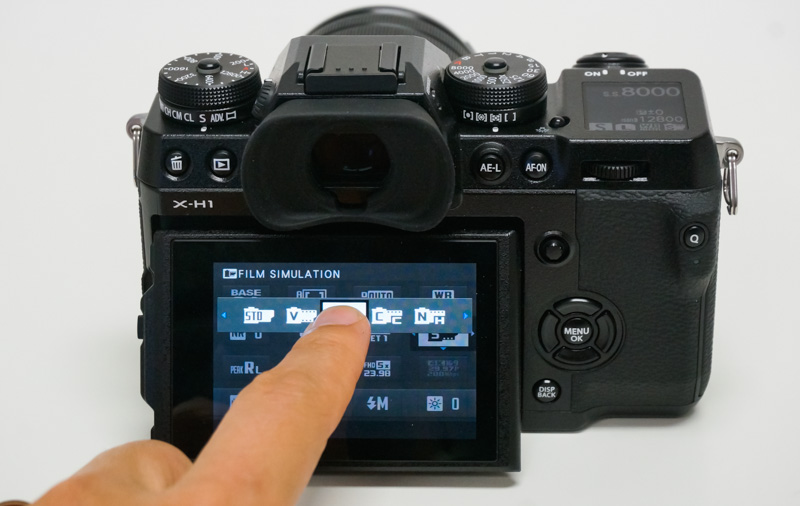 Meanwhile, the rear LCD display follows that found on the X-T2, with three-way tilt capabilities. And for the very first time, Fujifilm introduces touch capabilities to their Q menu system so you can easily change settings without having to reach for the buttons or dials. Having the option of touch control also means settings can be changed during video recording without the risk of shifting the camera in the process, or dial sounds being picked up.

In fact, the new Movie Silent Control actually disables the aperture ring, shutter speed dial, and ISO dial, so all controls are via the Q menu system on the LCD display. The X-H1 also provides shutter speeds equivalent to the shutter angles for 24, 30 and 60p video capture, so you can select options like 1/24th, 1/48th, 1/96th, and 1/240th. 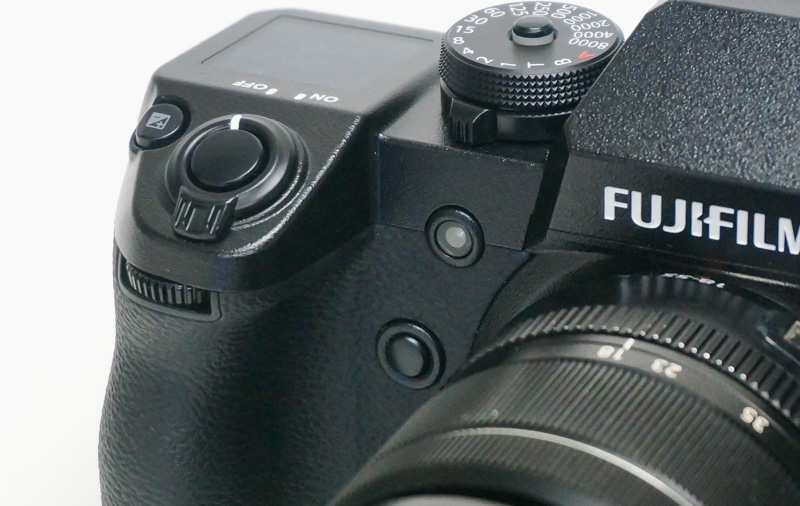 The X-H1 also comes with a new feather-touch shutter button which is highly damped so to further reduce camera shake when you trigger the shutter. As we noted during our First Looks piece, this new shutter button is very nicely damped, so you hardly feel the shutter triggered. Suffice to say, it’s very easy to fire off a burst of shots in continuous shooting mode as just a touch will set the camera off.

Perhaps to accommodate for the new touch features on the rear LCD panel, the EVF on the X-H1 has been moved back 3mm so your nose won’t come in contact with the screen while using it. This has a higher resolution than the one we saw on the X-T2 (3.69 million dots compared to 2.36 million), and is brighter too (800cd/m2 to 500cd/m2). The refresh rate also certainly seems fast enough, as we didn’t experience viewfinder blackout throughout our testing. We’d say that while it’s not as good as the one found on the Sony A9, it’s certainly close, and that’s saying a lot. 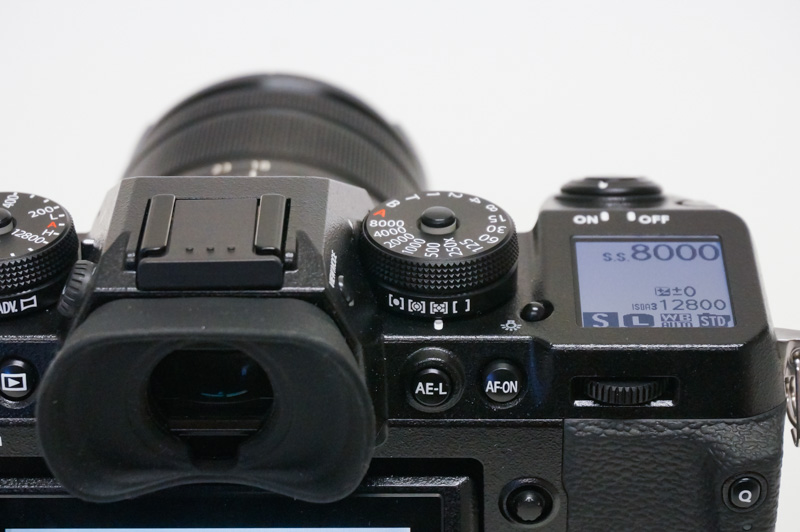 The camera also has two memory card slots, so that you have the option of overflow or backup storage. UHS-II cards are of course supported too (in both slots), so that the card is not the bottleneck when you’re shooting in high-speed bursts or high frame rate video recording. Overall, there’s a lot to like about the body design of the X-H1, as it brings the best of the X-T2 and the GFX-50S together, with the trade-off being just 166g in extra weight compared to the X-T2 (including battery and memory card).

Write a Review
Compare This | Specifications
More video options make this the most well-rounded camera Fujifilm has released thus far
In-body stabilization is smart enough to incorporate the stabilization on lenses
X-Trans III sensor is two years old now
Battery life is low for a professional series camera
Our articles may contain affiliate links. If you buy through these links, we may earn a small commission.
Sponsored Links