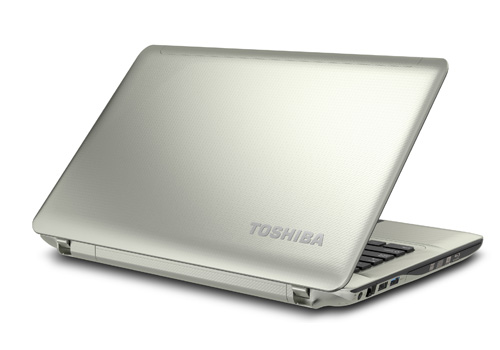 Coated in a silvery mesh design, the plasticky 14-inch Toshiba Satellite E300 packs the latest Intel Sandy Bridge Core i5-2410M (2.3GHz) processor on top of 4GB RAM and a 640GB HDD. While it doesn't have discrete graphics, the new integrated Intel HD 3000 graphics should be sufficient for some 3D gaming, though obviously not at the higher settings.

Before we delve into the hardware performance though, let's first take a quick overview of the notebook's pretty looks and design aesthetics. Now, we've been seeing plenty of design updates in the Toshiba line; they've gone for a more consumer friendly look, and the Satellite E300 is no different. Older Toshiba Satellites were very straightforward and direct, all function with no form, but the newer ones like the E300 now come looking all jazzed up and sexy.

Underneath the hood, we find a very nicely laid out keyboard, trackpad that seems quite different from what we're used to. While previous keyboard layouts were rectangular, the newer looks seems rather curvy, somewhat like the HP Envy line. Also like some of the other Toshiba notebooks, the keyboard also comes with backlit capabilities. The trackpad also goes buttonless, unlike previous models with their shiny buttons. Dubbed the ClickPad, the trackpad actually feels more responsive compared to the older models, so this is a tweak that we like.

Screen-wise, viewing angles are decent and the 14-inch screen has a native resolution of 1366 x 768 pixels. Since the E300 lacks discrete graphics, it has to rely on integrated graphics. The Sandy Bridge integrated graphics have been beefed up compared to the previous generation, and we're expecting to be able to play games with 3D graphics without a problem at relatively decent settings.

Using our regular benchmarks of PCMark Vantage and 3DMark06 on the notebook, we found some pretty interesting results. For PCMark Vantage, the Toshiba notebook scored a cool 6261 PCMarks, which is pretty decent when compared to similar older generation Acer Aspire Timeline X 5820TG with its Intel Core i5 430M (2.26GHz) processor which scored 6348 PCMarks.

3D performance on 3DMark06 seems decent, with the E300 reporting a score of 4918 3DMarks. Sure, it's not on par with most discrete graphics, but a score that high means that the notebook should be capable of light gaming. We decided to try out Far Cry 2 and benchmark results showed an average 25.3fps on the native resolution and medium settings. You should probably be able to play at the lowest settings with no frame rate issues.

Lastly, for battery performance, the notebook lasted a cool 4 hours and 38 minutes on our DVD battery looping test. Given that the notebook weighs in at an average of 2.25kg, this is one notebook that we have no qualms carrying around.

Price-wise, it retails at a slightly expensive price of S$1799, especially given that the 13-inch Apple MacBook Pro retails at a cheaper price with almost the same specs. However, the build and quality of the Toshiba Satellite E300 does deserve some consideration at least.