The computing industry has often been guilty of what we call 'the big numbers syndrome". It's the idea that large numbers, be they gigahertz or megabytes are unequivocally better, when in many cases, the big numbers do not matter. Take for example the soaring wattage numbers for PSUs. It's debatable if most consumers actually need all that power when they should be looking at other criteria like power efficiency. Fortunately, these other factors have also grown in importance for PSUs and manufacturers are as likely now to advertise their efficiency figures as their absolute power output. Thermaltake's newest variation of its Toughpower series - the QFan version - is such an example. 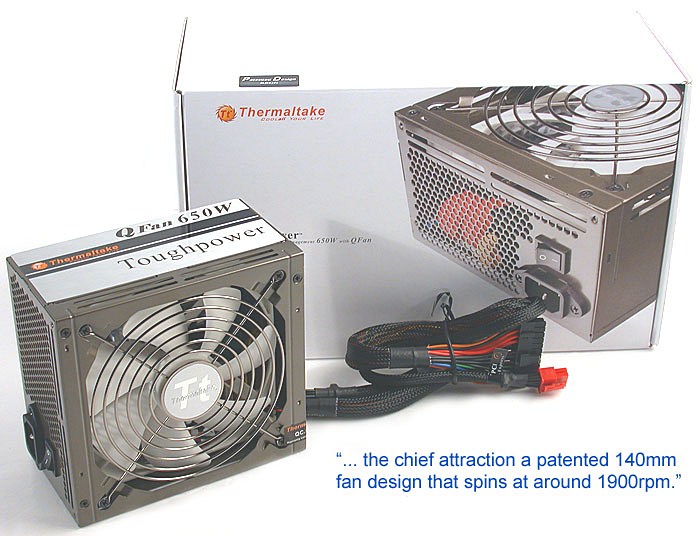 While Thermaltake has been guilty of trumpeting its high-end, high wattage PSUs like its 1500W Toughpower and even revealed a 2000W Toughpower at Computex 2007, it probably knows that most consumers do not require such power. Hence, the introduction of the new QFan version, which comes at a more practical 500W/650W capacity, with the chief attraction being a patented 140mm fan design that spins at around 1900rpm. At this speed, the resultant noise output is rated as low as 17.1dB, though according to Thermaltake, the maximum noise goes up to 34dB at 100% load.

Contributing to this low noise level are the numerous air vents on the PSU housing. Unlike the closed design on most PSUs, the many vents on this Toughpower allow for optimal heat dissipation and therefore reduce the need for a speedy and noisy fan.

Compared to the higher wattage models available from Thermaltake, the 650W here may seem inadequate. However, this model comes with active Power Factor Correction and ends up having a respectable efficiency number of up to 85%. This will naturally help reduce your electrical bills in the long run.

There are also up to four independent and dedicated +12V rails on this PSU to ensure that your CPU and graphics cards will have a stable supply of power. Up to three PCIe power connectors are given, though since this PSU uses modular cables, only one PCIe connector is present by default. Also included is a rubber vibration dampening lining that can be installed between the PSU and the enclosure to reduce vibration and therefore noise.

Modular cables are practically the standard for high-end PSUs nowadays as they significantly reduce clutter and this Toughpower is no exception. Thermaltake has even provided a handy pouch to stow the extra cables so you'll have no excuses to misplace those unused cables.

With so many high-end PSUs having similar features nowadays, it could be rather difficult for any vendor to distinguish its products. Thermaltake has tried to emphasize the silent aspect of this QFan version and going by its specifications, it should do rather well. 650W is also a comfortable amount of power for even a dual core, multi-GPU setup without being unduly extravagant and enthusiasts should bite.