If you remember our previous feature on the Sony Ericsson Xperia X10 mini pro, you will have a headstart on what's in store for you with this tiny phone. For those who have no clue what we are talking about, this phone is a smaller iteration of its bigger Android-based brother, the Xperia X10, with a slide-out QWERTY keyboard. Timescape is still heavily featured on the set, though Mediascape is sorely missing. A couple of nifty changes have been incorporated to accommodate the petite nature of the phone, and without further ado, here are our thoughts. 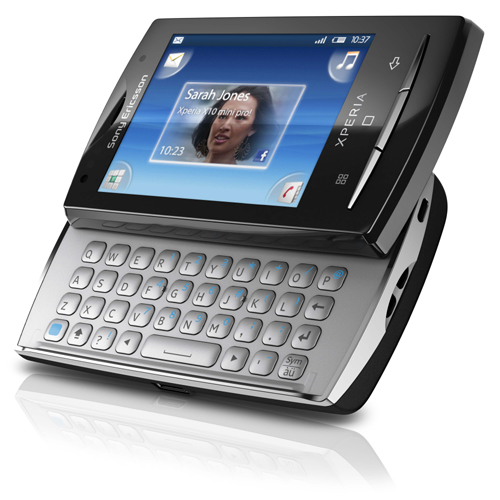 At first glance, the phone is, needless to say, really small and light by smartphone standards. The unit is outwardly fashioned after the X10, boasting of an equally fingerprint-magnet, glossy front cover with a matte black cover that's gives a good grip. The phone is not entirely black though - the main body is framed by a silver strip and accompanied by three silver buttons.

The QWERTY keyboard is safely tucked underneath, and slides out easily with a light push. Overall, despite the X10 mini pro's minute size, the device feels very sturdy and solid to hold. The buttons on the phone take some getting used to, with symbols that aren't the least useful at indicating their functions, save for an obvious "back" symbol. Once you get the hang of it, navigation should be a breeze.

The petite QWERTY keyboard might be small and compact, but we daresay the keys are a little too stiff with bad press feedback, and of course, small. While sending text messages, we found ourselves gingerly punching the keys in fear of accidentally pressing a wrong one. Without the slide-out keyboard however, users are limited to a virtual old-school numeric keypad that makes typing on the former a walk in the park.

While the size of the screen might appear dauntingly tiny, Sony Ericsson has thankfully came up with an ingenious solution - a useful four-corner touch screen user interface that makes it easier for users to navigate around. These four corners serve as shortcuts to major tools like SMS, Calls, Music, and Address Book. These corners don't only appear on the main screen, but are peppered throughout apps like Timescape, and the music player. Additionally, switching between pages and list of apps is but a mere swipe up or down. Coupled with the screen's responsiveness, our verdict here is that the surfing experience is smooth and fluid.

Similar to the Sony Ericsson Xperia X10 mini, there's a twenty page limit for you to place widgets, with each page limited to one widget. You can easily add or rearrange your widgets at no hassle, and more apps can be downloaded from the Android Market, so the sky is the limit here.

Multimedia-wise, the phone comes with a 5.0-megapixel camera with LED flash - specs that surpass some of the bigger smartphones out there -, and performs above average. You can choose from four modes to shoot with, namely, Auto, Macro, Twilight and Sports (do note that these features are only available on shooting stills). Auto-focusing is pretty accurate here, even in dim indoor settings.

Likewise in the audio department, the X10 mini pro does reasonably well, projecting sufficient clarity, though vocals came across as slightly airy and sharp, while there was also a bit too much bass for our liking.

How, we aren't quite sure of where the Sony Ericsson X10 mini pro stands - it does reasonably well as a productivity and multimedia phone despite being the smallest Android phone in the market. The price has not been officially announced yet, but adding affordability to its compact size factor might make this phone a winner.