The Sony Ericsson Xperia Mini will look familiar to those who have had their hands on the X10 Mini series - for starters, it is extremely small (and we mean it). Aside minor physical changes, software/hardware additions and the dropping of the X10 tag (but yes, it is the successor to the X10 Mini), what else has changed? Like its X10 Mini peers, the Xperia Mini series comprise of a standard version and a Pro version with a slide-out keyboard. Check our short comparison table and review below. 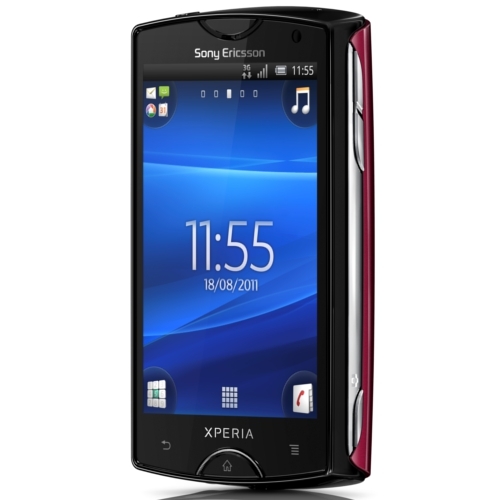 Like its counterpart, the Xperia Mini is classy-looking, well-built and very compact. Its design isn't groundbreaking or unique but the smartphone is definitely a good-looker just like its bigger cousin, the Xperia X10. Sony Ericsson generally make good-looking devices so no surprises here.

The Mini and Mini Pro looks identical to each other from top up. Controls on the sides have been slightly rearranged with the USB port and 3.5mm audio port resting on the bottom instead of the top. With that said, the general user experience remains greatly unchanged. On the whole, we generally liked the design of the phone, but we did have some small issues with it. Take for instance, the volume control, camera and home buttons are too flat for immediate feedback.

The Mini is slightly lighter and smaller than the Mini Pro because it does not come with the physical keyboard. Otherwise, internals are almost similar except for their built-in memory capacities (the Mini comes with 320MB; the Mini Pro comes with 400MB). It is also important to note that the Xperia Mini phones have their screens bumped up to 3-inch, 320 x 480 pixels as compared to its predecessor's 2.55-inch, 240 x 320-pixel touchscreen.

The main draw here for the Mini (as it is on the Mini Pro) is its ingenious four-corner touchscreen user interface for a compact screen. Like on the X10 Mini phones, these corners serve as shortcuts, making it easier for users to navigate around. This time however, users can place up to 16 shortcuts on the touchscreen, ranging from apps to shortcuts. Other changes to the user interface include limiting the number of main pages to five, whereas previously, users could place widgets on up to 20 pages. Because of the bigger screen real estate, one page allows for placement of multiple icons and widgets as opposed to one widget on the original X10 Mini series; definitely an improved management. Coupled with the screen's responsiveness, the phone's updated 1GHz processor and 512MB RAM, our verdict is that the overall navigation and surfing experience are extremely smooth and fluid.

Like the Xperia Arc, the Mini comes with the Reality Display with Mobile Bravia Engine feature which you can choose to turn on or off under Display settings.  Multimedia-wise, the phone comes with a 5.0-megapixel camera with LED flash and auto-focus capabilities. The camera's performance is decent, but processing and auto-focusing speeds, while mostly accurate, are slightly on the slow side. Likewise in the audio department, the Mini does reasonably well, projecting sufficient clarity, though vocals came across as slightly flat. 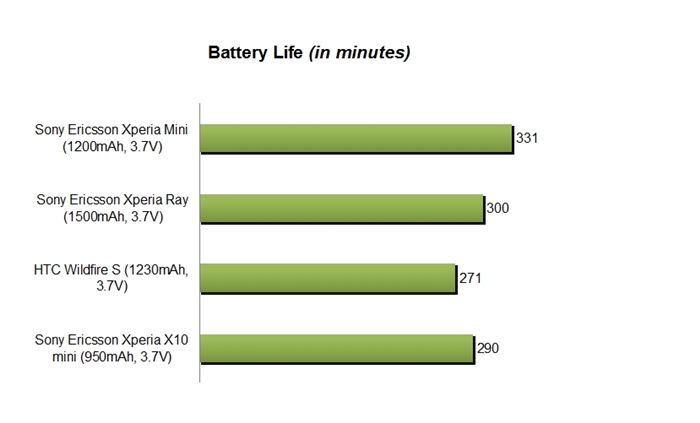 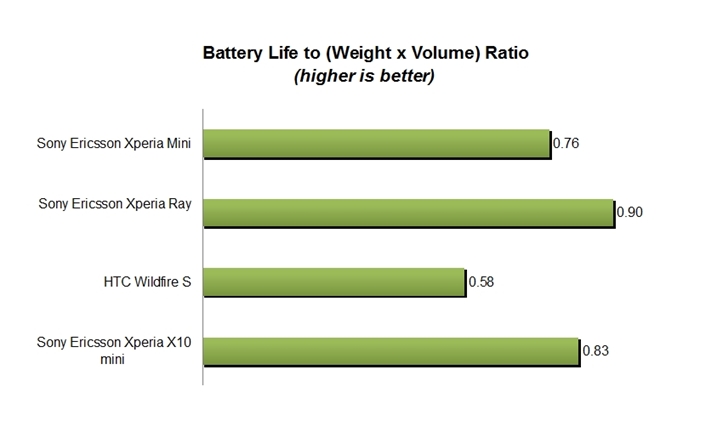 The Mini's battery life isn't fantastic but when you compare it to similarly-sized and -equipped peers, it holds its fort well, topping the list with 331 minutes on our battery test. To recap, our battery test consists of:

It is also important to note is that the Mini outlasted its predecessor by 40 minutes. With that said, this is mostly due to a higher 1,200mAh battery capacity (the Xperia X10 mini comes with a 950mAh battery). Unsurprisingly, both the HTC Wildfire S and Xperia Ray tailed behind mostly due to their bigger touchscreens.

For the outcome in the portability ratio metrics, the higher battery life, coupled with a lower weight and volume, gave it a decent standing. Still, it's somewhat hampered by a small but bulky body. As such, the impossibly slim Xperia Ray and smaller X10 Mini scored better compared to the Mini.

Under regular day-to-day usage consideration, the Mini lasted for a working day based on three common activities (calls and messages / emails, web surfing and social networks / music and video playback), which is reasonable to say the least for a small phone and its battery capacity.

Overall, the Sony Ericsson Xperia Mini is a precious gem in an industry besotted with large touchscreens. The small 3.0-inch smartphone is made for the casual user in mind, one who doesn't really need the high-end specs. The affordable and petite Android 2.3 OS equipped smartphone performs equally well as its keyboard-equipped cousin, the Xperia Mini Pro; for those who require to message or email on-the-go, we would suggest going for the slightly more expensive Mini Pro (launch price of S$458). Otherwise at S$298 (launch price of S$398), the Xperia Mini is an affordable choice for those looking for a fuss-free soon-to-be Android 4.0 equipped phone.