Well-known for its slim and touchscreen based Cyber-shot series of digital cameras, Sony has once again added another to its lineup, dubbed the Sony Cyber-shot TX1. So what has the Japanese company brought to the table that makes the TX1 stand out from its competitors? 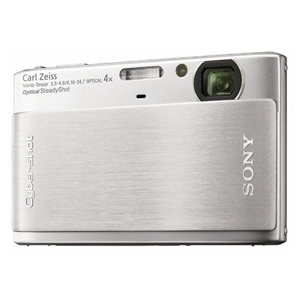 The TX1 is undoubtedly one of the slimmest and lightest compacts to date. It's difficult to find fault with the TX1's sleek outline, which makes it almost a fashion icon in its own right. The price however, is one of usability. In a bid to make the TX1 the anorexic camera that it is, you have minimal buttons placed across the body, while the ones that do appear such as the Playback and Power buttons were too flushed for easy access.

We did manage a good grasp of the device without exerting too much effort to grip the TX1 solidly. One oddity we noticed was the battery cover, which isn't your usual spring mechanism. Moreover, we had to push the latch that locks the battery in place out of the way before we could insert the battery.

Adopting a 3-inch touchscreen like its T-series predecessors, the TX1 gets a slight update to its user interface. We found this new UI to be much more intuitive and it was easy figuring out how to switch between modes like Program Auto, Anti Motion Blur, Hand-held Twilight and Scene Selections. The Intelligent Auto Adjustment mode was our preferred choice, and it managed to predict most shooting situations to a tee.

One of the most notable hardware updates that appeared on the TX1 is its new "Exmor R" CMOS sensor. Sticking to a larger 1/2.4-inch sensor size, the TX1 handled the noise levels much better than its predecessors, but there is still room for improvement.

For a compact camera of its class, we had no problems with its 4x optical zoom ratio, but its 35 - 140mm lens, which translates to the inability to take wide-angle shots, might not be agreeable to some shutterbugs who want everything in their shots. With both Smile Shutter and Face Detection being a common staple in recent compacts, we focused our attention on the Dynamic Range Optimizer which did recapture some of the lost highlight in the shadows. However, the resultant image had a tendency to be slightly overexposed, thus we'll leave it up to the user's discretion on whether to use this feature.

The TX1 starts up swiftly, clocking in at less than 1.5 seconds from off to on. The BIONZ processor within helped in the speedier processing of the taken shots and in Playback mode the interface didn't feel sluggish, though we encountered some problems with the lack of touch sensitivity.

One of the biggest downside for this slim, compact camera is its stamina, which left us disappointed as it went flat on us in slightly over than a hour, with up to 150 shots taken.

The Sony Cyber-shot TX1 is a definite looker and its light weight means you may even forget that it's in your pocket. Though we can lament the fact that the camera lacks a wide-angle lens and battery stamina, we found its improved imaging quality (thanks to its new Exmor R sensor) to be commendable. Fashionistas and those who wish to travel light would probably see the TX1 as the ideal camera for their needs.