Merging the functions of different devices into one product is an easy way to improve your product and make it essential to everyday use. Take any smartphone for example, which serves as a music and video player, ebook reader, and of course, phone. Or the plethora of speaker docks that double up as an alarm clock and radio. The Go! Ion 900 Torch is a portable speaker from Singapore-based personal audio maker SonicGear, and it too attempts a similar feat of multi-functionality. Is it any good then? That's what we're trying to find out.

As its name suggests, the Go! Ion 900 Torch also serves as a torch. Yes, the kind that you use as a source of illumination. It certainly seems strange for a speaker manufacturer to add the functionality of an LED torch into a portable speaker; but if the goal is to differentiate the product from other run-of-the-mill speakers, SonicGear has certainly succeeded. While we could possibly rationalize the lighting feature as something that would be handy if the device was being used in an outdoor setting (say, during a camping trip), during our testing we never experienced the need to illuminate our surroundings.

In addition, recording audio is also possible with the provision of a built-in microphone. The recordings sounded grainy and would benefit greatly from some serious noise filtering.

Coming to its main function, the Go! Ion 900 Torch is capable of playing audio through multiple formats. It is able to connect to playback devices by means of a 3.5mm auxiliary port, as well as to flash storage devices via USB. The ability to provide playback via an SD card is another smart addition. The versatility on offer with regards to connectivity means that we could use the speakers with a wide variety of devices with ease. We especially liked the option of storing our music on an SD card and eschewing the music player altogether. A small LCD at the front shows the songs being played. If you want to do away with storage medium altogether, the speaker also has an integrated FM radio. 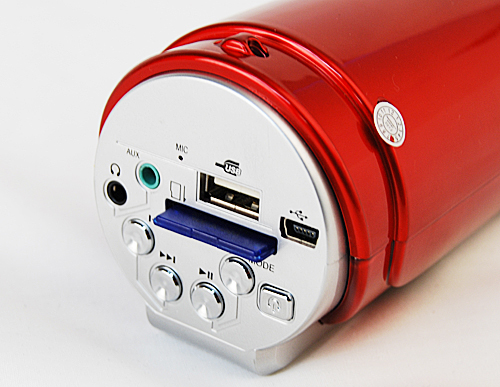 In terms of design, the speaker does resemble a torch, with its cylindrical design. Though not the smallest portable speaker by any stretch (it comes in at 65mm in diameter and 235mm in height), it makes up for it by ensuring versatility when it comes to power requirements. The speaker can run on four AAA batteries; you can also have it driven through USB connectivity, thanks to the on-board lithium-ion batteries. Interestingly, that's why the name has the word "Ion" in it. Be warned though, inserting the AAA batteries is a hassle due to the absence of grooves and we struggled quite a bit when loading up our review unit. This is a design flaw that SonicGear should have accounted for. With all that going on under the hood, the Go! Ion 900 Torch still remains small enough to easily fit in your backpack. 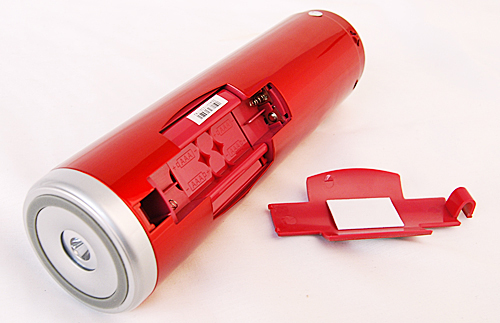 Audio performance on the whole does not overwhelm, although for its size, the Go! Ion 900 Torch's 1.5-inch drivers gave a satisfactory showing. Mid-range frequencies were handled with diligently and the speakers sounded best when handling standard, top 40s music fare. However, when tested with sterner stuff, such as Buckethead’s distortion heavy Sail on Soothsayer, the speakers struggled to reproduce the audio with high fidelity. In particular, the guitar parts sounded muddied and lacked definition. Essentially the Go Ion 900 Torch is perfect for casual listening, especially on the move. We were happiest with the unit when using it to provide audio for movies watched outdoors with friends huddled around the laptop screen. If you're using it in the middle of the night, and don't wish to disturb others, there's a headphone jack. 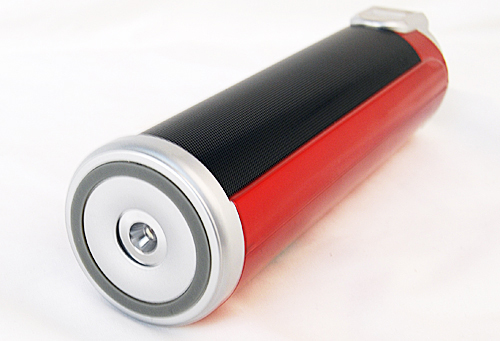 Costing just S$69 the Go! Ion Torch 900 places a lot of functionality in your hands. A decent simple speaker set, the device allows for different ways to ensure that you do not run out of power. It also allows playback from portable MP3 players, computers, notebooks, flash drives and SD cards. For good measure, SonicGear has thrown in a torch, an FM radio and recording capabilities as well. The eclectic mix is affordable and perfect for those who need the functionality of a speaker, music player, microphone, torch and radio without expecting high performance at an affordable price. It kind of reminds us of the Swiss Army knife if you need some context.