Funk without the Spunk

Gaming geeks, skater boys, and what have you. Many have been lured by the flamboyance of Skullcandy's products resting on the shelves, and if you happen to be one of the guilty ones, well, we can understand why. Skullcandy's audio offerings are eye-catching, elaborate, and undoubtedly attractive in their own loud, brassy way. We snagged one of its latest on-ear headphones recently to see if this pair actually sounds as good as it looks. 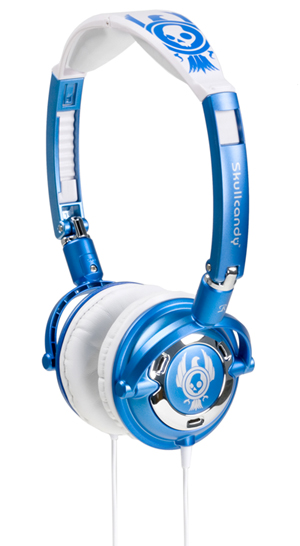 Designed for urbanites, Lowrider is one of the few on-ear designs from Skullcandy which offers an extensive selection of colors. And it reeks of sexiness and versatility. These headphones own a pair of swiveling DJ cones, so it's easy on the ears and also ideal for your mixing sprees. The headphones can be conveniently tucked away, credit to a collapsible headband. Furthermore, we didn't have any trouble in finding a snug fit since the band is adjustable as well.

However, you might want to know that it doesn't come with a pouch. So if you wish to keep them spick and span, it's best to have some form of casing handy. Essentially, the Lowrider's Blue/White color scheme is a pretty sight with its white faux-leather cups and shiny blue cans. Overall build is delicate - it feels almost flimsy, although the headphones should endure for some time if handled with care. A standard 1.2m cable ends in a 3.5mm gold plated tip, with just enough cord to leave your player in the bag. This rider is light and comfortable generally, but expect a degree of sound leakage to emanate from its shell.

To see how it performs in the audio department, we ran the cans through various MP3 clips (ripped at 192kbps) on a Creative Zen X-Fi. Our verdict? Bass levels were natural but trifle. Highs sounded clipped, or less crisp. Mid-range delivery was decent, though it wasn't as plump as we hoped it would be. Audio fidelity was a little feeble on the whole and a touch hissy. For example, AC/DC tracks lacked attack, so to speak, and metal heads looking for a rocking good time may be disappointed. Ironically, Buble and Feist sounded more palatable when we slid over to the jazzy and indie corner. As such, we can safely conclude that the Lowrider fares better with cleaner tracks compared to a rock fest.

Note that this is a pair of on-ears, not over-ears, so don't bank on it to keep out ambient noise. One other observation: we had to crank up the volume quite a fair bit in order to drive the 40mm drivers. So unless you have ears built like a bat, your PMP may suffer from a greater battery drain compared to a pairing with in-ears. Conversely, the headphones were able to sustain high volumes without distortion inferences. That's a plus.

At about eighty dollars apiece locally, we are slotting this in as an entry-level headset though it's still priced slightly above the budget range. It's definitely listenable; just don't expect any crisp production or robust bass lines. These swanky cans should do fine if you aren't finicky about audio fidelity and if looks happen to mean everything. True to its proven formula, the Utah-based company has served up yet another portable and swanky audio companion with the Lowrider, but only perhaps for the casual listener.