As it stands, Samsung has crowned the AV market with the widest selection of 3D TVs. In fact, they have a 3D candidate in each LCD, LED-backlit and plasma genre. In the LED-backlit category, the Series 8 is ranked just behind the flagship Series 9 which touts a "mini TV" remote and a whopping $12,888 price tag. Samsung has thrown in 46 and 55 inch variants for the Series 8, and we will be taking a closer look at the 55-inch UA55C8000XM model. 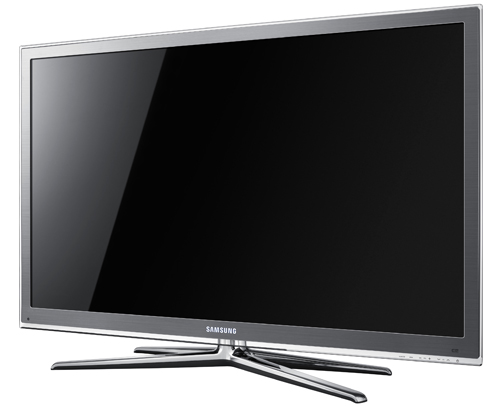 The C8000 distinguishes itself from the orthodox crowd with its brushed-metal frame and clear plastic trimmings. Typical of Samsung's approach, touch-sensitive controls are lined at the bottom corner of the bezel. Additionally, Samsung has also taken great pains to ensure the set is limited to a skinny 23.9mm girth. Its silver quad-stand is shaped like the letter "X", which is a welcome change compared to rectangular stands sported by Samsung's previous Crystal Design. The C8000 swivels, but appears slightly unstable on the pedestal. With backlights of its own, the only gripe we have with the slick and metallic remote is the rather stiff buttons.

Look behind the panel and you'll discover a generous surfeit of AV connectors. Four of its HDMI ports have been stepped up to version 1.4 to cater for 3D renders. In addition, there are two USB ports for external storage media as well as the optional FreeTalk Skype camera. What we didn't fancy, however, are the additional adapters required for certain ports such as the Component and Ethernet connectors.

Features wise, the C8000 packs a staggering amount of firepower such as an Internet@TV entertainment portal, DLNA, and codec support for MKV and DivX. Besides YouTube and Picasa, Google Maps and Facebook widgets are also readily downloadable from the Samsung Apps store. Unfortunately, we were unable to test the C8000's extended PVR option without an RF input at our labs, but the TV is supposedly able to record TV programmes onto a USB drive.

Generally, black levels were solid on DisplayMate but were less convincing than Panasonic's VT20S PDP. This was more prominent on the Dark Gray Scale pattern where gray boxes along the edges had a lighter hue than those in the middle. An inevitable result of Edge-lit LEDs no doubt. The TV passed the Color Scales test, with the exception of abruptly darkening gradients. On the HQV trials, we'll give the Series 8 top grades for its noise reduction and motion handling. Incidentally, we observed that the TV's Film Mode (24p cadence conversion) performed better on "Auto 1" than the "Auto 2" setting.

For Blu-ray playback, there was a distinct improvement over the Series 7 which doesn't do local dimming. Black levels were also more consistent. In other areas, picture quality was satisfyingly sharp although its frame interpolation and backlight strobing feature (LED Motion Plus) did introduce the occasional judder.

We understand Samsung is still bundling the 3D Starter Kit with the C8000 as we write this. Essentially, the kit consists of two pairs of active-shutter glasses and a "Monsters vs Aliens" 3D Blu-ray disc. Its eyewear is one of the lightest around but not necessarily the most comfortable with prolonged use. For that matter, they aren't rechargeable, unlike LG's offerings.

For the test, we ran two 3D Blu-ray titles on the C8000 including the IMAX Space Station documentary. Unfortunately, similar issues we've had with the Series 7 surfaced yet again. Crosstalk, or ghosting, was prevalent in numerous scenes. On the up side, while the glasses did reduce brightness intensity by a peg, Samsung's eyewear did not alter the hues too drastically.

There are many things to love about the Series 8. It is polished and pretty. It is packed with multimedia features and a hyped-up PVR perk. It comes with a truckload of advanced display controls, has excellent noise reduction algorithms, and creates a mean Blu-ray picture. On the flip side, its cranky 3D performance and lavish price have blemished Samsung's otherwise stellar LED-backlit package.