With netbooks coming in thick and fast these days, it is sometimes hard to distinguish one generation from the next. Thankfully, Samsung's 10.1-inch N220 netbook was designed to break with what we might call a "peas-in-a-pod syndrome". The N220 is significantly different from its N310 forerunner or any of its predecessors. The question is, would the new N-series cost as much as the premium N310? Thankfully, Samsung has priced the N220 more competitively this time at $799, instead of hoisting the bar any higher.

Note that Samsung also released a similar model, the N210 alongside the N220. The two are separated mainly by cosmetic differences. The N210 is dressed in a patterned lid instead of a two-toned rendition. 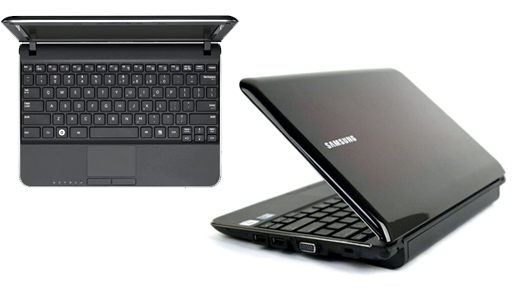 If you recall, the N310 sports a matt, rubberized shell with a glossy screen on the inside. Take that styling formula, swap it, and you'd probably end up with the N220. This time, Samsung's latest booty is fronted by a glossy, black and burgundy lid. Beneath its hood, sits a matt screen framed by silver accents. That's quite the reverse, isn't it? At 1.32kg, the N220 isn't the lightest netbook we've handled, but it's compact and mobile enough to tote around with.

The 1024 by 600 display is powered by LED backlights which explains the lid's slim profile. Observably, the screen managed a wide viewing angle on the horizontal plane. Contrast shifts, on the other hand, were annoyingly visible on the vertical axis. Full marks though for sharpness and clarity.

No radical alterations were made with the low profile keys. On the plus side, Samsung has retained the same wide key-pitch which makes this netbook a comfortable piece to type on. Similarly, its wrist-rest suffered little flex when stressed. The hinges weren't the stiffest around, but they'll do in holding the lid in place.

Interestingly, Samsung has opted for a slider-switch instead of a power button with the N220. Also, the speakers have been relocated to an area just below the front lip. Little changes were detected in the ports department, however with three USB ports and a 3-in-1 memory card slot. As a handy feature, these USB ports offer a "Sleep and Charge" perk such that you get to charge your USB gizmos without having to power on the netbook.

Intel has since downsized the Atom platform from a three-chip solution down to two. Dubbed Pine Trail, it is claimed to offer a 20 percent power reduction compared to the former Diamondville iteration. Samsung's N220 uses this new Atom package, which includes a GMA 3150 graphics core and memory controller integrated with a single-core N450 processor. The integrated graphics managed to hold out when we ran a 720p video with a bit-rate of 8Mbps. Stutters were observed with a 1080p clip though.

Powered by a 6-cell battery pack, the N220 emerged with a laudable mileage of 5 hours and 25 minutes on our battery life test, a result that just about equaled the similarly Pine Trail based ASUS Eee PC 1005PE which lasted 5 hours and 46 minutes. This result is based on a 480p clip loopback with Wi-Fi disabled. Performance wise, the N220 is yet again matched by the ASUS netbook (1,324PCMarks), pound for pound, with a final PCMark05 score of 1,328PCMarks.

Besides Windows 7, you can also expect to find an "Instant On" Linux-based Phoenix Hyperspace operating system on the N220. It's nothing new on netbooks, but it does provide a quick-start option, if light browsing or Skype calls are what you're after. It took approximately 32 seconds to boot.

To wrap this up, while the N220 may sit on the slightly higher end of the price curve, it still managed to obtain a thumbs-up from us. After all, it is a decent netbook who isn't afraid of long road trips with a handy pre-boot Hyperspace you can warp speed to.