With a penchant for naming their mice after snakes, Razer has a new offering waiting to be let loose. However, their new mouse is unlike any of their previous ones. Named after the Black Mamba, the world's fastest land snake and second largest venomous snake, the new Razer Mamba is a milestone in the company's history as this is its first ever wireless gaming-grade mouse. 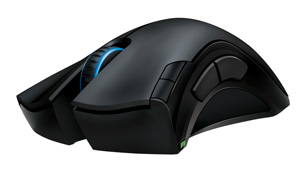 Like most Razer products, the Mamba is decked entirely in black. The mouse itself is black and so is its dock. The dock glows blue once it's plugged in and acts not only as a transceiver, but also as a stylish dock for when the Mamba's batteries need charging.

Alternatively, you can also plug the USB cable that goes to the dock directly into the mouse for charging, allowing you to charge while you play and instantly turning it into a wired mouse. Speaking of batteries, Razer arms the Mamba with a lithium-ion battery pack, which is good for about two days of use.

Comparisons with Microsoft's SideWinder X8 are unavoidable and the first thing we noticed is that the slightly smaller Mamba feels more comfortable. It also helps that the Mamba's top surface is rubberized, giving a better overall feel and grip.

In terms of performance, the technical specifications of the Razer Mamba are at the cutting edge. Using Razer's newest 3.5G Precision sensor, the Mamba is able to track up to a staggering 5600 DPI. This might be overkill for most, and fortunately, the Mamba has two buttons at the top left corner of the mouse for quick adjustments to the sensitivity level. The extra sensitivity it offers needs some getting used to, but you'll be able to appreciate it once you get acclimatized.

As for latency, we tried the Mamba in both wireless and wired modes and as far as we could tell, and as is the case with the SideWinder X8, the Razer Mamba experienced no lag whatsoever when untethered. Both were just as responsive.

The Mamba is also bundled with a special Mamba mouse configuration software that allows you to tweak your mouse to insane levels. It allows you to configure and save user profiles onto the mouse's onboard Synapse memory. The software is so comprehensive that it even allows you to dictate independent sensitivity settings for the mouse's X and Y axes.

With the Mamba, Razer has cemented its place as the premier name in gaming-grade mice. At a hefty S$199 however, the Mamba is not exactly affordable, but its ability to switch from wireless to wired mouse, the thoughtful design and fantastic build quality, coupled with its comprehensive tweaking application, makes it one of, if not the best mouse we have seen in a while.