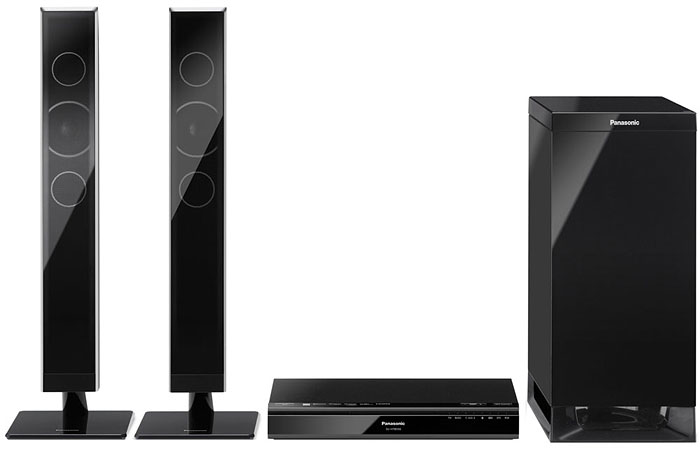 How many of you bought a TV because you’re impressed with its sound quality? We doubt there are any these days as the last we personally observed that did an excellent job of handling audio was Panasonic's very own Viera TH-P54Z1N Plasma TV back in 2010. As TV makers went in pursuit of higher picture quality, and ever slimmer housings, the quality of sound systems built into TVs seemed to been largely heading south in the past few years. Yet, everyone understands the important role audio plays in completing the visual experience. So, if you can no longer tolerate your TV’s habit of mixing dialog and sound effects into an incomprehensible mess, perhaps it’s time to look for an external solution.

The Panasonic SC-HTB550 is a simple home theater sound system that consists of a sound bar that can be separated into two pieces, a wireless subwoofer, and a digital amplifier that claims to have superior anti-jitter performance. Priced at S$499, it looks to be an attractive package if you don’t see the need to go more than a 2.1-speaker setup.

A Trio of Glossy Black Components

The first piece of equipment that you would unpack after opening up the carton box is the SU-HTB550 receiver unit; it receives signals from your AV sources, and is required for powering the amp-less and DSP-less speaker sound bar. The chassis is mostly metal (coated in black), with the exception of the front plate which uses black glossy plastic. At roughly 310 x 195 x 44mm, the receiver has a footprint smaller than most 13-inch notebooks, so there shouldn’t be a problem finding space on your TV cabinet to accommodate it. Weighing just under 1.2kg, it isn’t heavy either. 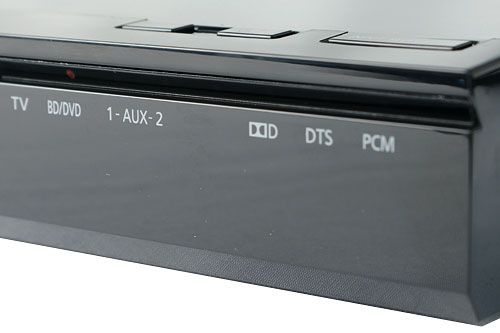 A few buttons can be found at the top of this main unit: the power button on the extreme left, and the volume buttons and input source selector towards the right. There’s neither a VFD nor LCD screen at the front - instead, it relies on tiny LEDs above the audio mode (Dolby Digital, DTS, PCM) and input labels to tell you which ones are in use. These LEDs also double up as speakers/subwoofer volume level indicators, as well as visual indicators when you're accessing certain functions (more on this later).

Round the back, you’ll find two HDMI inputs, and one HDMI output that goes to your TV. The latter supports ARC (Audio Return Channel), which basically means that this same HDMI port is capable of carrying content ‘downstream’ from the TV back to the receiver. If you've a compatible Panasonic Viera TV, this will enable Viera Link, which allows you to control the devices using one remote. Audio connection-wise, you get two optical inputs, which will come in handy if you’ve playback devices that don’t output sound via HDMI. Expectedly, there are no analog audio inputs, so do ensure that your playback sources are all modern enough to support either of these digital connectivity options to make best use of this system.

It's also worth noting that in some regions, the main unit supports using a Bluetooth device (such as a Bluetooth-equipped PC or smartphone) as a playback source. Surprisingly, the SC-HTB550 retailing in Singapore doesn't come with this feature.

Don’t be alarmed when you find two speakers tucked neatly in the box: your sound bar isn’t broken. A unique feature of the SB-HTB550 sound bar is that it can be detached into two pieces to allow for a more traditional left-and-right vertical placement. A metal speaker joint that goes between the two speakers is used to combine them into a single-piece sound bar, along with four screws to hold everything in place. 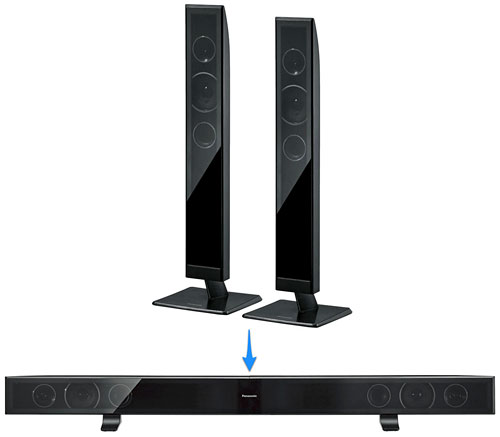 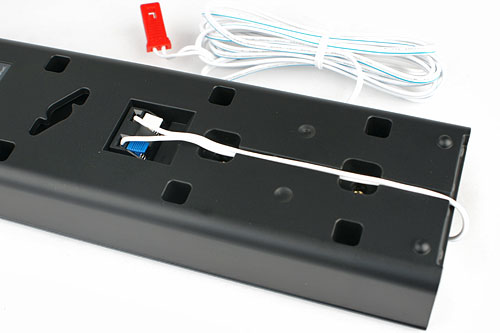 Either speaker can be the left or right speaker - it just depends on how the wires are hooked up. The speakers use spring clips to hold the speaker wires (bundled) in place; the other ends of the wires are terminated in plugs which you simply insert into the jacks at the back of the amplifier. For wire management, there are tiny grooves at the rear of the speakers that you can tuck the wires into. Two types of feet attachments are provided to elevate the sound bar from the table; there are also two base stands should you decide to go the standing stereo speakers route. The speakers can be wall-mounted too, by hanging them onto screws driven into the wall. 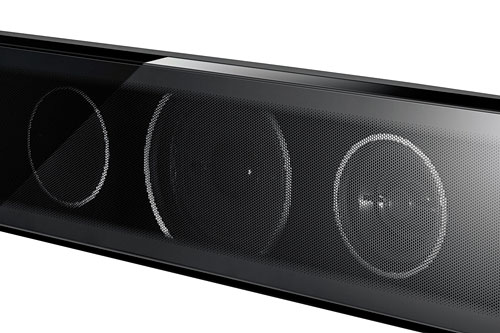 Consistent with the rest of the components, the SB-HWA520 subwoofer (1-way, 6.5-inch cone type driver) also sports a glossy black finish. This subwoofer is the same one used in the Panasonic SC-HTB520 of 2011; it connects wirelessly to the receiver, thus giving you a great deal of placement flexibility. That being said, it still needs to be connected to a power outlet. 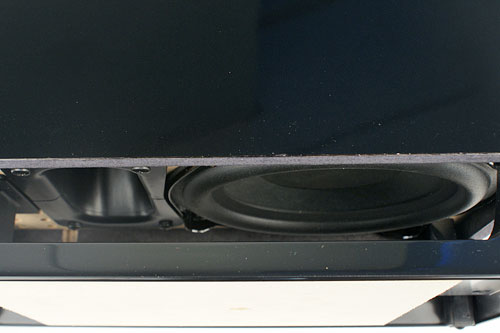 While you can control the volume and choose input source using the physical buttons on the receiver, for the most part, it's more convenient to use the bundled remote control. This credit card-sized remote is also the only way to access several critical functions. For example, it has two additional sets of buttons for adjusting dialog effect level, and output level of the subwoofer. 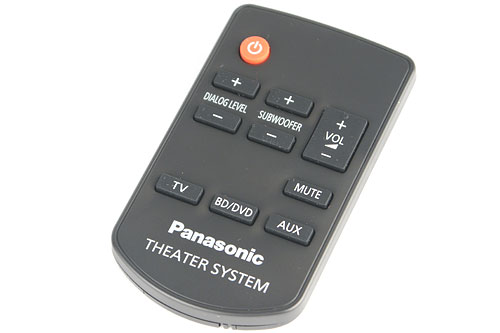 But that's not all. There are functions that don't have dedicated buttons on the remote, and activating them often require you to hold down a particular button for a couple of seconds, followed by presses on the same button again to choose your desired setting. For examples, to change the audio output mode, that button is the 'Mute button'; for the auto gain control (AGC prevents sounds from going too loud all of a sudden), it's the 'Aux' button; and for the 3D surround effect and clear-mode dialog effect (when turned off, Dolby Virtual Speaker effect is used), it's the 'TV' button. And because there's no display on the main unit, your only cues are the LEDs, which will flash differently based on your selection. Unwilling to commit such confusing steps to our memory, we therefore found ourselves turning to the user manual repeatedly to confirm whether a particular combination of LED flashes meant that a particular mode was selected. We've to say that this is definitely a step back in user friendliness.

The SC-HTB550 audio system was evaluated primarily on how it handled dialogs and sound effects in movies, as well as music in a small room. To ensure consistency with our other reviews, the Blu-ray versions of Michael Jackson's This Is It, and Superman Returns were again chosen as part of our testing material. An episode of crime drama Leverage was given a spin too. For music, an assortment of CDs were used, from a Chesky Records' demo disc to oldies from Mandarin pop and folk singer Cai Qin. Our source player was an LG BD670 Blu-ray/DVD player.

Even with the Clear-mode Dialog setting at level 2 (it goes from 1 to 4), voices were pretty clear. Upping it to level 4 made them sounded brighter, and more forward. Surround effects were decent, though not entirely immersive. Its finest work came early in the movie, when Superman had to save Lois Lane from a burning jetliner falling from the sky.

We started off with the subwoofer output level at the highest level (it goes from 1 to 4 as well), and the bass proved to be disconcerting when we were trying to enjoy Cai Qin's mezzo-soprano vocals. That said, we always returned to the highest volume for movies and most audio playback needs. Your mileage may vary, but our usual practice is to find a male voice, and adjust the subwoofer until the voice is just barely localizable. Apart from certain audio genres (as pointed above), we noticed that bass for listening to music was tight and was just adequate for a neutral feel. Bassheads however would find this audio system underwhelming. For movie playback, there were several occasions where we wished the low frequency volume could go up another notch or two.

While we won't call the SC-HTB550 a musical sound bar, music was nicely imaged in the left and right channels. We'd be foolish to hunt for instrumental precision at this grade of equipment, but truth be told, the SC-HTB550 didn't perform too shabbily, as far as 2.1-systems go. Overall, the sub/sat blend was satisfactory, though there was a tendency to heighten the midbass.

With a detachable design and more AV inputs, the S$499 SC-HTB550 can be viewed as an improved version of the old SC-HTB520; the latter can now be had for as low as S$399 at some electronics megastores. While using the SC-HTB550 as a sound bar offers less clutter, it's nice that you can split it up and set the pieces vertically on stands to try to get a wider sound field. In fact, this may be the preferred layout if you've a large TV whereby the width runs longer than the sound bar (956mm). In general, setup is easy; wireless pairing of the subwoofer with the main unit is as simple as turning both units on.

Sound-wise, the SC-HTB550 strikes a decent balance between pep and detail. If you need a wider soundstage than what your TV's built-in speakers can provide, and at a much louder volume, the SC-HTB550 should put a smile on your face. However, know that it lacks finesse at high volume, the surround effects aren't totally convincing, and the subwoofer can rumble along aimlessly at times.

In terms of value, note that you can get similar sound quality for much less on true multi-channel home-theater-in-a-box (HTiB) solution. Sound bar solutions always command a premium and thus you would have to make the call if you need form over function to justify adopting a sound bar option. On the other hand, Panasonic's SC-HTB550 sound system allows you to transform between a traditional 2.1-channel setup and a sound bar solution if you can't decide; you can set them up as you please in your home setup and adopt whichever sounds best for your needs. Furthermore, the wireless nature of the subwoofer also affords you more placement possibilities to maximize the subwoofer's (somewhat limited) low frequency performance. Once you factor in these aspects, the asking price of the SC-HTB550 becomes fairly reasonable.

To sum up, the Panasonic SC-HTB550 is a versatile 2.1-channel sound system that would serve more than adequately for anyone looking for a better sonic experience than the one offered by their TV's built-in speakers. And it doesn't hurt that it's rather nice-looking, assuming you don't mind the generous use of glossy black enclosures.

One competing model that rivals the SC-HTB550's 'breakable' sound bar design is the Samsung HW-E551. The latter has a higher S$649 price tag, but it does land you Bluetooth connectivity and a USB Host function for more flexible media sharing. Panasonic opted for a lower cost route to omit these functions since most Blu-ray players or media players come with some of these functions and in any case, you'll need these playback devices to use your sound system to its fullest extent.