Panasonic has upped the ante since their initial slew of Blu-ray players and we now have our hands on the company's current BD (Blu-ray Disc) player, the DMP-BD30. As we know it, the BD30 is positioned as the forerunner in the business to deploy the Final Standard Profile 1.1, or otherwise branded as "Bonus View". HD-DVD diehards might scoff at this, but "Bonus View" does mark the dawn of PIP (Picture-In-Picture) and audio-mixes for the Blu-ray camp. 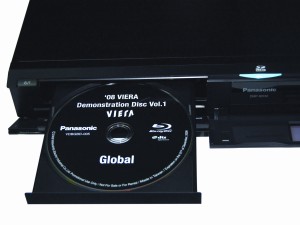 Compared to Panasonic's initial BD10 model, consumers now have a further 25mm (height-wise) liberated for their rack space with the BD30. Looking at the unit itself, the turquoise LED can be easily mistaken as its power indicator when it's actually meant for the SD Card reader instead. It's switched on by default, but we found a way to program it via the unit's settings such that it lights up only when an SD card is present.

The remote for the BD30 can be rather confusing. The naming convention of certain keys can be rather confounding. For example, the "Disc Menu" option we are familiar with actually translates into "Top Menu" on the remote. In addition, the OSD may be gratifying but it can be a mite tedious to navigate. We had to wade through six screens in order to arrive at the HDMI output settings. Thankfully, we found a "Display" button which allows us to tweak other picture adjustments without stopping the disc.

For those of you interested in its loading time, the BD30 took approximately 21 seconds, from its power-off state up to the time the tray is fully open. A first-generation Samsung BD-P1000 took a second more.

Driven by Panasonic's PHL Reference Chroma processor on its Uniphier platform, the BD30 carts a single HDMI 1.3 compliant port, supports 24fps edits, and does up-conversions of DVDs to full 1080p glory as well. For the HQV tests, we've set the BD30's output to 1080p with its 3D and Integrated NR (Noise Reduction) pumped to the max. This forces the player to do the heavy lifting while we disable the TV's NR. Spurious noise is always a concern whether it's SD or HD feeds and fortunately, the BD30 was proficient enough in muting the noise without sacrificing too much detail. However, the unit's NR feature overdid the muffling on a 480i DVD disc a little too much, although most of the noise grains were duly reduced.

The player came up tops during the deinterlacing process, as verified on HQV's "Video Reconstruction" test. It managed to reform the spinning diagonal lines with insignificant "jaggies". Similarly, the Uniphier platform also coped well with inverse telecine decoding on the "Film Resolution Loss Test". Only a slight moire effect was noticed. For real world tests, we played back some MPEG-2 and MPEG-4 Blu-ray movie discs to see if the BD30 holds up. While the images on the MPEG-2 clips were predictably less intense, they both came off with little judders or kinks on nippy dynamic images, like the cop-chase scene from "Batman Begins".

Home-theater enthusiasts waiting in the shadows for Profile 1.1 and who aren't too finicky about internet connectivity (like the tethering Profile 2.0) should see the BD30 as a welcome arrival. It isn't the most user-friendly of the lot, taking into account its fastidious Dolby audio settings, but the BD30 gets the job done admirably on the high definition front at least.