DVDs have been around for almost 15 years. In that time, we have seen its explosive growth and mass adoption by the public and despite the arrival of a new HD format - Blu-ray, the DVD remains a staple optical media that's relatively inexpensive. As with all mature technologies, prices have arguably reached the bottom for DVD players and writers alike.

External DVD drives which usually command a premium have also become more affordable and even more portable, like LG's latest slim external DVD writer, the GP08NU20, which is being marketed as a suitable companion for netbooks due to its feather weight of just 370 grams. 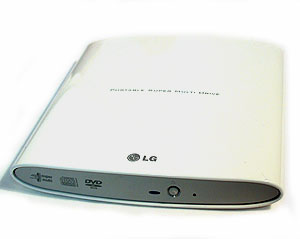 Taking its cue from the spate of glossy white devices that have sprung up in the consumer electronics world, the LG GP08NU20 has a glossy plastic shell that's surely a fingerprint magnet. It's fortunate then that LG went with white instead of black, since the fingerprints, while visible, are less obvious on a white surface.

Unlike older external optical drives that required its own power adapters, the new low-power breed, of which the LG GP08NU20 is one, can subsist entirely on power from the USB 2.0 interface. The USB power cable included with this drive ends with two USB connectors, but depending on your PC's USB ports, you can power the GP08NU20 by connecting just one of the two USB connectors.

When it comes to format compatibility, LG did not name this a 'Super Multi' drive without ensuring that there is complete support for practically all DVD formats. That means both single and dual-layer discs and regardless of whether it is a DVD-R or DVD+R. There's even support for the less popular (some would say obscure) DVD-RAM format.

Writing and reading speed however takes an expected hit from the ones found on internal DVD writers and even on single layer disc, 8x is the maximum for DVDs and if you're still using CDs, that tops out at 24x. To assist the process, LG has helpfully included a comprehensive suite of software from CyberLink and Nero that covers everything from creating your own DVD to backing up the contents of your PC to DVDs.

Predictably, the writing performance of this drive is nothing to shout about. In our testing, it took the GP08NU20 around eight minutes to copy a DVD containing approximately 2.4GB of data to a blank DVD-R disc. With its 8x write speed, the GP08NU20 was obviously unable to burn the DVD at our DVD-R's maximum 16x speed. However, it's a compromise that most consumers hunting for an external DVD writer would not mind.

Along with the weight, prices have fallen for external drives and at around US$60, the LG GP08NU20 is certainly an affordable companion for those situations where a USB DVD writer will come in handy. While the world is slowly moving away from DVDs, there's still demand for them, particularly when they come in such a sleek, slim package as the LG GP08NU20.