It's been a couple of months since Blu-ray was ordained as the next generation high-definition (HD) successor to the DVD format but when it comes to practical choices for the average consumer, there are still perhaps less than a handful for the PC. This is a perception LG hopes to change by introducing an external version of its fastest 6x Blu-ray rewriter and HD DVD-ROM drive currently, the plainly named BE06. 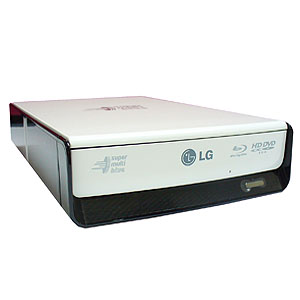 With the dimensions of an external hard drive (of the 3.5-inch variety) and weighing around 1.5kg, the LG BE06 is not exactly the most portable of devices, though that's understandable as there's a limit to how far one can shrink such devices. The enclosure protecting the optical drive inside the BE06 is an attractive, glossy black and white, which is hence susceptible to fingerprint smudges. The eject button on the BE06 is touch sensitive, which fits in with its overall polished image.

Unlike external hard drives that may have eSATA or FireWire options, you connect the BE06 to the computer solely through the included USB 2.0 cable. While USB 2.0 is pretty fast, you may prefer to burn your data from the PC's hard drive instead of doing so directly from a source disc or drive.

Touted as one of the fastest Blu-ray rewriters in the market, the LG BE06 is capable of writing single layer BD-R media at 6x. Writing to dual layer Blu-ray discs (50GB) and rewritables (BD-RE) obviously take much longer at 2x. As an LG 'Super Multi' drive, the BE06 can read and write to practically all DVD and CD media formats at decent speeds, including less popular ones like DVD-RAM. Our tests using Nero DVD Speed also found the BE06 to perform well within its specifications for reads. As for writing to Blu-ray discs, we have only seen BD-R media that are rated at 4x, though LG did provide us with Verbatim 4x BD-R discs which are able to go up to the maximum 6x possible on the BE06. Even then, expect to take slightly more an hour to finish a 25GB single layer BD-R at these speeds.

For those intending to use the LG BE06 as a portable HD player (a natural decision given its versatility in playing back both Blu-ray and HD DVD-ROM formats), be sure to have either a decent processor (dual core at least) or a graphics card with hardware acceleration support for HD decoding to ensure smooth playback. LG has provided a suite of software utilities for both Blu-ray/DVD authoring and playback so that aspect has been addressed, as long as you're on Windows XP or Vista.

With the glut of external hard drives driving storage prices to a historic low, a portable Blu-ray Rewriter to burn and backup your files anywhere you go seem rather anachronistic to us. The S$899 retail price tag doesn't help either, restricting the potential audience to a rather niche group of enthusiasts who require it for data archiving or Blu-ray authoring purposes on the go. For the rest, we'll recommend waiting for prices to be more competitive before plunging into the HD era.