Apple's Back to School promo is back with discounts on Macs and iPads, free AirPods, and more
Product Listing
LGPanasonicPhilipsSamsungSharpSonyToshiba

As things stand, two large-screen ultra high-definition television sets have already been introduced for the local market. One is Sony's KD-84X9000, and the other is LG's newly baked LM9600 Ultra Definition Cinema 3D Smart TV, or UD TV in short. Interestingly, both brands have much in common than they care to admit. For instance, each carry an 84-inch panel with a nice and plump 4K (3,840 by 2,160 pixels) resolution, or four times the screen estate of a Full-HD set. Both displays also tout similar passive 3D tech coupled with polarized glasses, and not to mention full-screen 1080p views for co-op gaming sprees, known as Dual Play for the LG set. In other words, you don't have to share an annoying split-screen with your gaming buddy in two-player mode. You might want to note that the UD TV is powered by edge LED backlights with pseudo local dimming perks, versus the direct (or full-array) 55-inch LM9600. LG invited HardwareZone to their flagship store recently to give their new flagship screen a quick take We took up their offer, of course. Here are our initial impressions of the UD Cinema 3D TV, and we hope they'll come in handy if you're thinking of splurging S$24,999 on this swanky centerpiece. 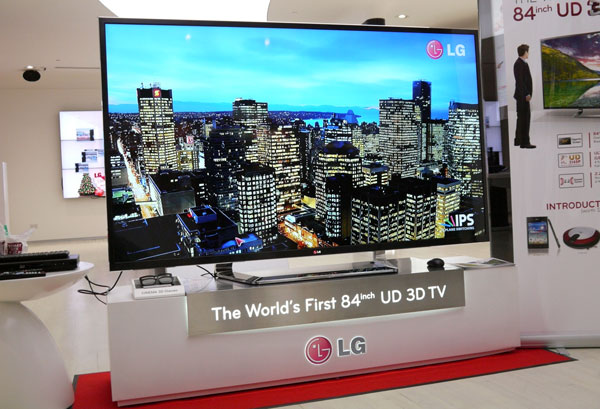 There is good reason why LG named the LM9600 UD TV after its smaller 55-inch Full-HD model. Both displays carry similar features and aesthetics, although there is a huge disparity in terms of picture resolution naturally. First impressions tells us that LG's UD TV lacks the "single glass sheet" design. This can be credited to the pronounced 23mm bezel needed to support the heavy 84-inch panel, which also gives the TV a less 'seamless' profile in comparison. However, the UD TV is no less imposing or elegant as a showpiece by any means. The TV's edges are framed by a metallic border, while the huge panel is supported by a swiveling Ribbon Stand which gives the unit an elevated and unfettered look. For AV connectivity, expect four HDMI 1.4a ports and three USB 2.0 slots in all. Composite and component inputs are available with the aid of breakout cables below. 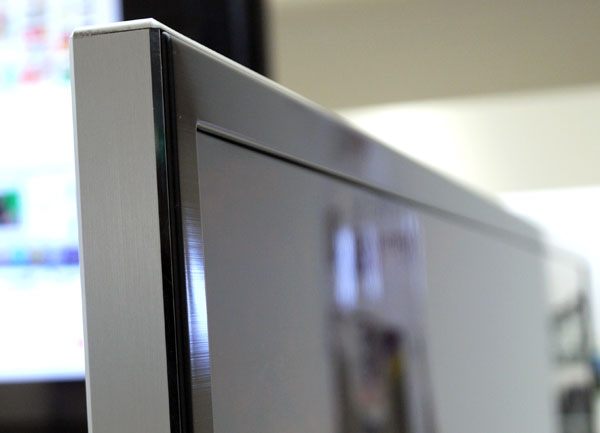 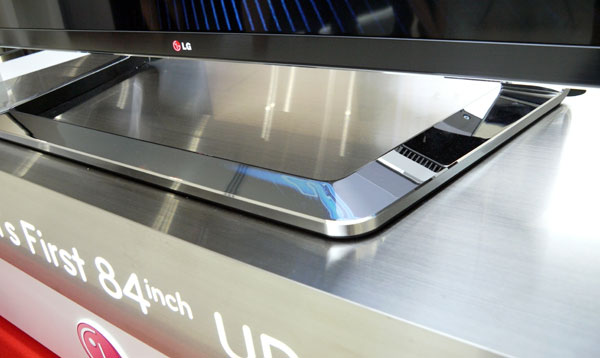 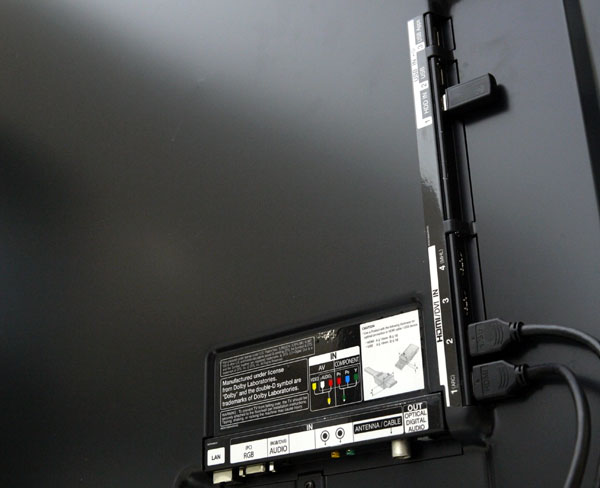 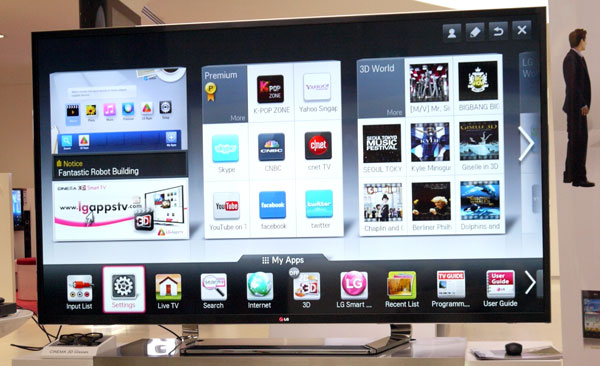 Audio wise, LG has fitted a so-called "2.2 Speaker System" with two down-firing drivers plus two rear-firing woofers at the back of this unit. Also note that the UD TV was situated in the middle of LG's showroom with no walls directly behind the display to augment the TV's sonic performance, especially with the lower frequencies. But if we had to call it, we'd say the Sony X9000 expressed a fuller audio delivery and a wider soundstage. Like the smaller LM9600, the gesture-based Magic Remote will be included with the UD TV, along with four pairs of polarized 3D glasses and two additional pairs for the Dual Play gaming feature. We did not notice any obvious changes on LG's attractive Smart TV (Home Dashboard) platform. On that note, both payable and free stereoscopic documentaries, music videos, and gaming content are currently available via the online 3D World video store.

Before we begin, please note that the following observations were made using the set's Standard picture preset, mainly because the store's bright lighting was inappropriate for the dimmer Cinema preset. That said, it's time for our take. We understand from LG that users are unable to disable the TV's built-in upscaling feature. This makes perfect sense since watching a tiny frame on a huge screen would defeat the purpose of having a big 4K TV to begin with. Let's start with the lowest resolution - DVD playback. Good news is, LG's Triple XD Engine, the video processing engine responsible for upconverting video content, did a decent job in boosting the standard-definition feed to a somewhat watchable result. But as expected with 576i content on a 4K screen, compression artifacts were unfortunately amplified, and the same goes for the disc's inherent noise levels as well. These blemishes were less evident at a viewing distance of 3.5 meters or more, if you can afford that kind of space from the panel. We also observed a slight amount of odd motion judder, but this was easily rectified with LG's TruMotion feature (goes up to 800Hz).

However, things were quite different once we introduced Blu-ray discs into the picture. The UD TV made short work of upscaling HD material, and at times, it was hard to tell if it was HD or 4K content we were gawking at; thanks to the rich textures and concise picture details observed. On the other hand, we did notice a slight amount of backlight leakage coming from the panel's edges. In this case, enabling Dynamic Contrast (we set it to "Low") is a must if you're finicky about screen uniformity and black levels. The set also offered an excellent 3D viewing experience, credit to its deep stereoscopic depths and crisp image details. On top of that, we also noted that users were able to vary their 3D perspective by moving their head slightly to the left or right. The only caveat during the 3D ride is that the so-called "interlaced" lines are still evident at a shorter viewing distance, as with most passive 3D displays. 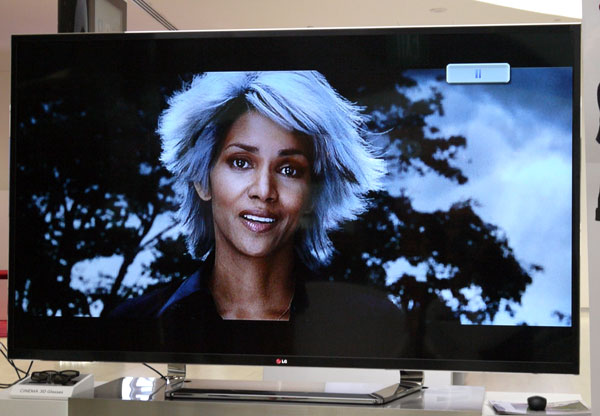 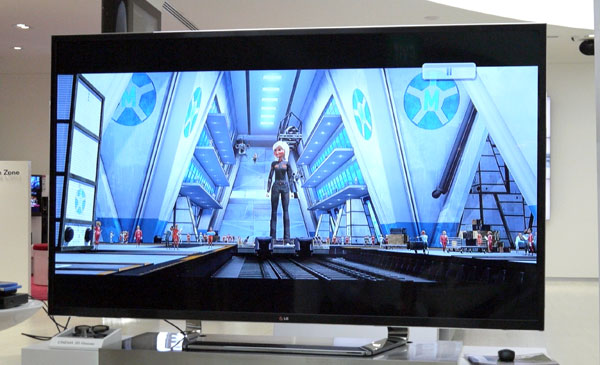 LG's UD TV is very much like the 55-inch LM9600 in terms of their aesthetic and Smart TV attributes. However, it's a pity LG was unable to incorporate a more streamlined design on the UD TV compared to its smaller sibling. On the other hand, the UD TV does boast a more commanding sonic arsenal, considering that it packs two woofers within its profile. Other than that, you can expect similar features on board, such as LG's dashing Smart TV Home Dashboard interface, peer-to-peer wireless standards like Intel's WiDi and WiFi Direct, and not forgetting LG's 2D to 3D conversion feature which was truly out of this world when tried with 4K content. And yes, the practical Magic Remote is part of its package too.

Performance wise, we did not expect LG to pull off a miracle when upscaling DVD content, and true enough, minor defects such as aliasing and noise artifacts of the film's smaller resolution were evident on closer inspection. Nonetheless, the overall image quality was laudable at an ample viewing distance, considering there's 3,840 by 2,160 pixels to cover. On the contrary, its rendition of Blu-ray and native 4K materials were downright impressive. And the same goes for its gratifying 3D delivery. Based on what we've seen so far, it's hard to make a definitive comparison between LG's and Sony's 4K contenders since Sony did not demo any standard-definition content during the launch event. However, the LG UD TV has proven its ability to render decent low-resolution pictures, while its upscaled HD and 3D delivery managed to surpass our expectations.

Sony might face an uphill battle in marketing the KD-84X9000, which costs S$35,999, eleven grand more  than LG's 4K display! That said, LG isn't resting on its laurels either. For the initial promo period in October, the South Korean firm is throwing in the LG Optimus VU smartphone, a Hom-Bot (a smart vacuum cleaning robot), a video call camera, eight pairs of polarized 3D glasses, four pairs of clip-on glasses (for those using prescriptive lenses), and two pairs of Dual Play glasses with each UD TV purchase. If you don't wish to miss out on these promotional items, we suppose it's best to order yours before October runs out -- that is if you can part with twenty-five grand for a TV. 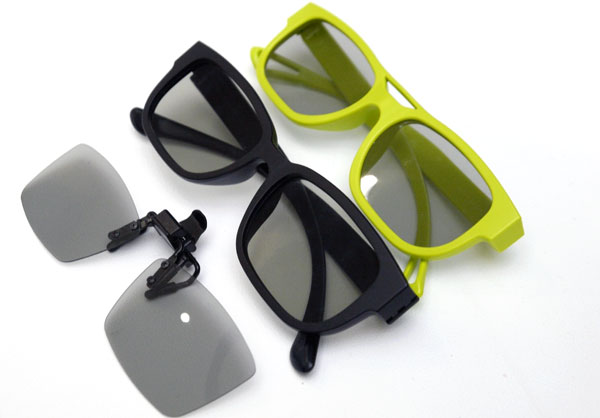 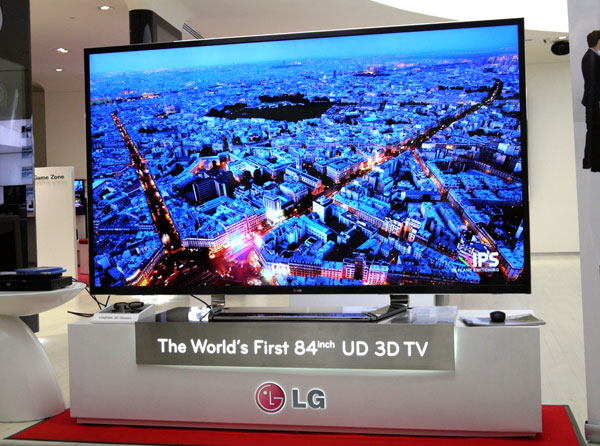