Jawbone has made a name for themselves based on its innovative design and the Noise Assassin algorithm used to clean up sound on its Bluetooth headsets, such as the Jawbone Era and Icon. The manufacturer has now turned its attention to the wireless speaker and speakerphone market. And what we've here today is the Jawbone Jambox that boosts an output capacity of 85 decibels in a small package.

A single glance at the Jambox and you can see the guiding hand of Yves Behar behind it. The rectangular box has sharp delineated edges and is encased in a fine, well-crafted metal grill. The harshness of the form is softened by a rubber capping at the top which also displays the basic controls.

From the top view, you would be forgiven for mistaking the speakers for a game console controller. There are three unmarked but generously-sized buttons here. The plus and minus buttons' functions are pretty self-explanatory: they control the volume. On the other hand, the circular button activates “Talk” mode which makes the speakers verbalize information such as battery life and connectivity. If you were to hold it down, it activates any MyTALK apps that you have installed. Simply put, MyTALK is an online platform for you to download apps and do software updates for Jawbone products. It sure is a nifty idea, if you ask us. 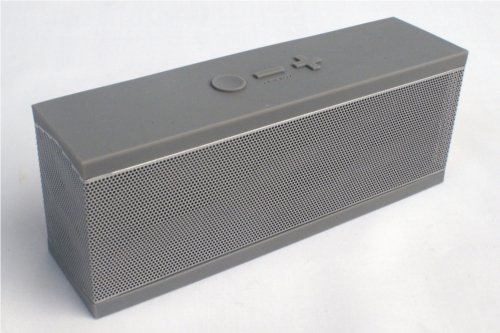 The side panel houses three more controls. A micro-USB port is available for charging purposes and a 3.5mm port is used for audio. Unfortunately, the Jambox does not feature USB playback. The toggle switch helps you power the device on and switch to wireless connections.

Holding up the airtight Jambox you would realize that for its small size - it measures 151 by 57 by 40mm - the speakers are actually quite hefty. They weigh in at 350g and a fair portion of this weight is attributed to the woofer plus tweeter combo housed within. Jawbone's literature also claims a moving-wall passive bass radiator; and interestingly, the battery is housed inside it.

We found its performance in Total War: Shogun 2’s and StarCraft II: Wings of Liberty to be highly commendable. The music and ambient noise for both games were rendered well. Jambox’s good transient response especially made Shogun 2’s Japanese-themed war drum and percussion-based tracks sound tight and crisp. It also has a surprisingly deep bass (maybe having the battery in the radiator does work wonders). On the whole, we would describe the Jambox's sound signature as warm and pleasant.

Unfortunately though, there are certain inherent obstacles associated with its size that the Jambox cannot overcome. While it works exceedingly well in small rooms, larger spaces are not adequately filled with sound. Surround sound is also missing.

The Jambox is Bluetooth 2.1 compliant and supported profiles include A2DP 1.2, Handsfree 1.5 and Headset 1.1. Also included in the software repository of the speakers is Multipoint which allows users to connect to multiple devices simultaneously. Pairing was quick and playback over Bluetooth was satisfactory although we found it to drain the battery life at an accelerated pace when compared to using a cable. An in-built microphone coupled with the wireless capabilities means that the Jambox can be used for conference calls in addition to performing its regular speaker duties.

On the whole, the Jawbone Jambox is a well-engineered, slickly designed speaker that actually punches well above its product category when it comes to sound quality. Unfortunately, another adjective that can be thrown in to the mix to describe it would be “expensive”. These speakers cost a whopping US$199.99. Locally, you can find them at selected Courts retail stores for S$328. While it's undoubtedly a gorgeous looking device with exceptionally good performance for its size, we doubt that many people are willing to fork out such a considerable sum for portable speakers. But if you're looking for one of the better personal mobile audio speakers in the market right now, and money is no object, the Jawbone Jambox is an easy choice.