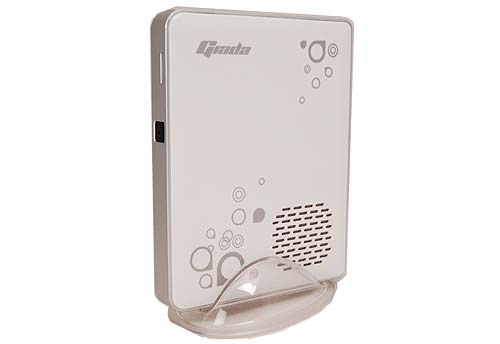 Giada's Mini PC A50 is a neat little nettop that is based on AMD's Brazos platform. It comes with a dual-core AMD E-350 (Zacate) processor that's clocked at 1.6GHz, 2GB RAM, a 320GB HDD and integrated graphics in the form of the AMD Radeon HD 6310. This seems pretty decent for a nettop and we're pleased to note that it also uses Windows 7 Home Premium instead of the more limited Windows 7 Starter that's often found in netbooks.

It's a no-frills device, measuring just under 20 cm tall and 16 cm wide, with a thickness of just 2.6 cm. This means it's easy to set up and move around, and it doesn't take up too much space by itself, especially when its standing upright on the included transparent plastic stand. You can easily put this nettop in the kitchen for internet surfing or connect it to your television to watch a movie.

If looks mattered, then the A50 would come across as ordinary, with a silver strip around the sides while covered in shiny glossy plastic. It's not ugly by any means; it just doesn't really stand out. Which is a good thing really, as the A50 would blend in well anywhere. It's small enough to hide behind the monitor if you so wish, but doing so means you'll have trouble accessing the ports, which the A50 has plenty of.

From the four USB 2.0 ports down to the HDMI port, the Giada nettop allows you to easily hook it up to almost any configuration. Located at the top for easy access is a USB 3.0 port, a SD Card reader and the microphone and audio jacks. There's also a VGA out which means older displays and monitors get some support. This means that you can find a new leash of life for your older monitors by hooking it to a nettop like the A50. Of course, you can use it as a media box for your TV with the bundled remote control and the HDMI port.

We've been testing plenty of AMD Brazos equipped machines recently, and on our usual benchmark tests of PCMark Vantage and 3DMark06, so we know roughly how the A50 nettop will perform. As expected, the nettop reported a score of 2417 PCMarks, similar to the HP Pavilion dm1 which uses the same processor. 3DMark06 performance was also similar, with the Giada A50 scoring 2454 3DMarks compared to the dm1's 2382 3DMarks.

All in all, this AMD Fusion nettop would make for a great new addition to your home network, or one that can double as a media playback device for your television. At a street price of around US$449, the value proposition of the Giada MiniPC A50 is one that's hard to beat, though there should be plenty of other similar nettops in the market already (or soon enough). Do note that you will have to get your own monitor, keyboard, mouse and speakers (which doesn't come bundled) to use the nettop.