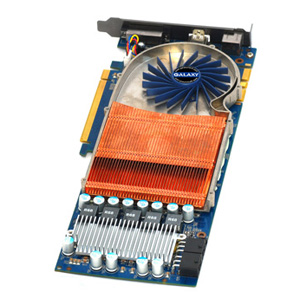 Although Galaxy has managed to shrink the card down to a mere 0.6 inches (1.5cm) thick, it still retains its length, which might pose a problem for casings with insufficient depth. Nevertheless, the thin form factor will help greatly in getting it to fit in compact casings.

Part of the reason why NVIDIA's GTX 200 series of cards was never made available in single slot form was because of the heat they generated, so to make this card possible, Galaxy has gone about and designed a custom single slot cooler.

Performance-wise, the Galaxy GeForce GTX 260+ Razor Edition comes with NVIDIA's reference clock speeds. That means 576MHz at the core, 1242MHz for the shaders and 2000MHz DDR at the memory. We gave it a spin on 3DMark Vantage and found that its scores were comparable to other GeForce GTX 260+ cards.

For those worried about issues with heat, chill, because the custom single slot cooler from Galaxy uses a vapor chamber technology copper base, which utilizes liquid vaporization and condensation for quicker transfer of heat. We recorded a maximum operating temperature of 78 degrees Celsius, which is however a good 7 degrees higher than what a reference GeForce GTX 260+ would usually achieve.

This is not entirely surprising given that the Galaxy card has a significantly smaller heatsink design, something that even vapor chamber technology cannot overcome. In light of this finding, good air circulation within the casing is still a must.

Galaxy could perhaps have done more to keep the card compact (it is still a tad too long), but the Galaxy GeForce GTX 260+ Razor Edition, as it is, should have no problems fitting in less spacious casings.

Although the Galaxy GeForce GTX 260+ Razor Edition is nothing to shout about, it is an unique take at an older SKU. For so long, HTPC enthusiasts and LAN
party gamers have had to make do with less powerful graphics cards, but the latest offering from Galaxy changes all that.