Besides your usual notebooks catering to the average consumer, Fujitsu's known for its tiny computers that fit comfortably in the palm of your hand. The Fujitsu U1010 and the U2010 were small tablet machines that were pretty to look at and interesting to use, but its latest LifeBook UH900 goes into pocket territory and gives the Sony VAIO P a run for the money. 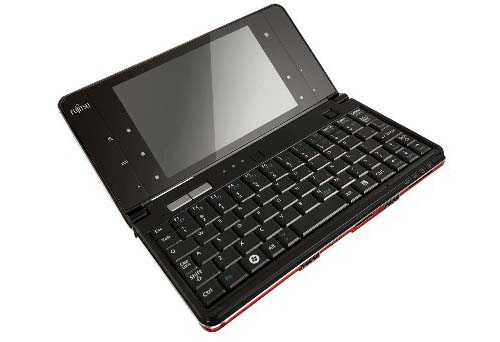 While Sony's VAIO P would like to tell you that it's made for the pocket, we know from first hand experience you either need a huge pocket or a generously padded rear. Not so with the LifeBook UH900. We managed to tuck it in easily in our front and rear pockets without difficulty. It reminded us of the Nokia E90 communicator when opened, though obviously both are very different machines.

Like the VAIO P though, the UH900 lacks a track pad, relying instead on a touch point located at the top of the keyboard, with the right and left click buttons on the left side. This makes it slightly easier to use, as you'll have to grip the UH900 in your hands while clicking and navigating with your thumbs. The acceleration of the trackpad is a tad slow at default, so you'll want to bump the speed up.

If using the trackpad is just not your thing, the resistive touchscreen is an option for your fingers - though not a very good one. With a 1024 x 600 resolution, onscreen icons and buttons are tiny and almost impossible to tap on with your fingers, especially those located near the edges of he screen. Windows 7 too doesn't seem ideal for this purpose as the icons and buttons are often too tiny to work with our fingers on such a small display. One probably needs a custom interface with larger icons like Moblin for this device.

If fingers aren't your thing, there's still hope as the UH900 comes with a stylus. Since it's a resistive screen, you'll also be fine just using any object that you think is pointy enough to poke at the screen without touching it. Otherwise, just stick to the trackpoint and you'll be fine.

Moving downards, the keyboard, while small, felt reasonably comfortable on our fingers. Due to the size of the keys however, you may end up pressing extra keys if you have thick chunky fingers (like us). Because of the size of the UH900, it's lacking the length needed for an isolated keyboard for easier typing like Sony's VAIO P, but this is one instance where you just can't have everything.

Performance in a Pocket

Like most netbooks these days, the LifeBook UH900 packs an Intel Atom inside, though in this case it's not your N280 or the newer N450 but the slightly more power efficient Z540 that's clocked at a higher 1.86GHz. Adding further power efficiency to its line up, the UH900 uses a Fujitsu SSD that's 62GB in size instead of the usual HDD. This should hopefully help it score in the longevity department.

Since the Intel innards are mostly the same as always, expect to see the usual performance figures. We were unable to get the usual benchmarks to run without a VGA port (our review set had no additional accessories), but we're guessing similar results to the Sony VAIO X which uses a slightly better Intel Atom Z550. Battery-wise, our unit lasted a little over 2 hours at 122 minutes, which is decent enough for its size.

If you're intrigued by all you've read so far and are considering getting the Fujitsu LifeBook UH900, bear in mind that this unit won't come cheap at S$1,988. But if you're willing to fork out that amount though, then you can be sure you're getting a nifty gadget that's perfect for the pocket.