Manufacturers have always tapped the aesthetics factor as an avenue for product differentiation and in recent years, this approach has extended even to seemingly unglamorous internal components, like the humble workhorse that is the PSU. Faced with the choice of including flashing LED lights or LCD displays to compete against other brands, FSP has gone for the understated option of having a blue housing for its new 700W PSU, the Epsilon 700. Even the fins of the fan inside the PSU is a light shade of blue to complement its exterior.

Not that it doesn't feature any LED lights at all, since the power button at the back has a blue LED in it. We didn't really fancy the plastic shade of blue though, and we think it is really going to be an acquired taste. In any case, most users would be more interested in the capabilities of the PSU and the looks are just a bonus. Here is where the Epsilon 700 gets serious. 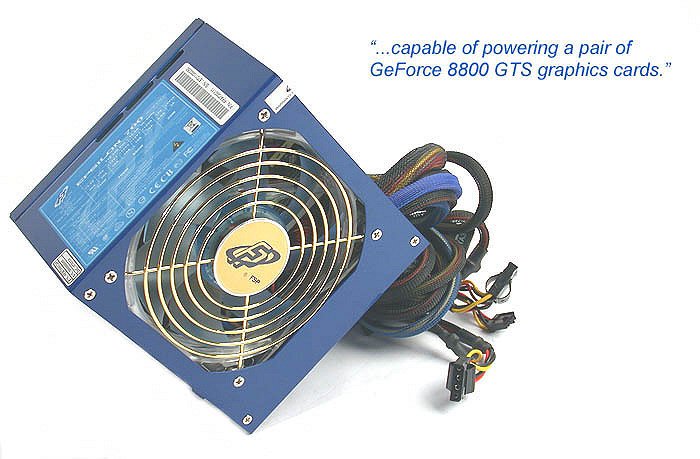 It's More than Just Blue

The Epsilon 700 supports the latest ATX12V and EPS12V standards and comes with power connectors that fit the newest processors from both AMD and Intel. There are also four separate 12V rails, each rated for a maximum load of 18A and two PCIe power connectors dedicated for graphics cards. Unfortunately, the Epsilon lacks a modular cable design, meaning there will be a large bunch of cables (albeit sleeved) dangling freely from the PSU; less than half of which the average user would probably utilize since there are six pairs of SATA and peripheral power connectors all together. The unused cables then take up unnecessary space in the chassis and can contribute to ventilation issues if not properly managed. Thankfully, FSP has included Velcro cable ties just for this purpose.

Ventilation for the internal components of the PSU is aided by a beehive grill at the back. A 120mm smart fan does the active cooling and its speed varies according to PSU load. FSP didn't provide us with any hard numbers for the noise output but our naked ears would place the Epsilon 700 on par with the competition for silent high-performance PSUs.

Just like how job seekers bolster their resumes by taking up certification courses, so do manufacturers. Firstly, the Epsilon 700 is on NVIDIA's official SLI-Ready list for power supplies. According to NVIDIA, it is capable of powering a pair of GeForce 8800 GTS graphics cards. A GeForce 8800 GTX SLI setup however is not recommended, as even the total 700W output on the Epsilon is not sufficient for that GPU class.

Besides that, the Epsilon is as environmentally friendly as a PSU can get, being both RoHS and WEEE compliant. So when the time comes to toss this PSU, it won't generate undue amounts of toxic electronics waste. Closely related to the environmental credentials is the issue of power efficiency and here, the relatively high 85% rating on the Epsilon is worth mentioning.

According to FSP, the Epsilon 700 consumes less than 1W of power during standby mode. Together with an active power factor correction (PFC) of 0.99, FSP has done almost everything possible to ensure that the Epsilon 700 is as energy efficient and environmentally friendly as possible. Perhaps the next move would be for the Epsilon 700 to undergo and pass the new and more stringent 80 Plus efficiency certification.

There aren't that many PSUs on NVIDIA's SLI-Ready list and less so for those capable of powering their latest high end GeForce 8800 series. The FSP Epsilon 700 is one of those powerful PSUs that is actually certified up to the GeForce 8800 GTS SLI. Of course, it would be better still FPS bumped up the specs to meet the requirements for the GeForce 8800 GTX SLI, but 700 watts of power is already immense for today's needs. The Epsilon scores well in terms of efficiency and its pricing of S$205 (~US$133) certainly makes it a very attractive PSU. Having a modular cable design would have been a great bonus, but its exclusion is understandable and doesn't detract from its overall value.