With oil prices and subsequently the cost of electricity at a historic high, enthusiasts with a decked out system may be aghast at their increasing electricity bill. That's when modern energy efficient technologies earn their pay. One of the more significant energy efficient initiatives in recent years is the 80 PLUS program, which gives the 80 PLUS certification to power supplies (PSU) that meet the minimum 80% power efficiency rating. Obviously such a scheme is another way for PSU manufacturers to differentiate and market their premium products and here to raise this standard today, we have the Enermax MODU82+. 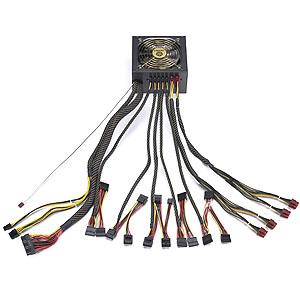 Our review unit from Enermax is its flagship 625W model, which along with its higher power output, also has additional power sockets for its modular cables compared to the other models (425W and 525W). Hence, one can connect more devices to the more powerful 625W model, which only makes sense. As mentioned earlier, Enermax has raised the bar with a PSU that exceeds the 80 PLUS standard. The MODU82+ is rated between 82 - 88% efficient and has an active PFC rating of more than 0.97 (part of the 80 PLUS certification includes Active PFC > 0.9).

Preparing for the Future

Besides supporting the latest processors from both AMD and Intel, the Enermax MODU82+ is also suitable for SLI and CrossFireX. To accommodate the newer graphics cards, the PCIe power connectors are all version 2.0 ready, meaning that they can fit both 6-pins and 8-pins (6 + 2 pins) connectors. As its name suggest, this PSU has modular power cables so you can only choose the cables that your system requires. Enermax did include four PCIe power cables, which are connected to the PSU end via custom 12-pin connectors. This is Enermax's idea of future-proofing its PSU to meet the growing number of pins used on graphics cards. If (or when) the day comes for a move to a 10 or even 12-pin PCIe connector, Enermax simply releases the appropriate cables for sale, with minimal disruption to consumers.

Then there are also the proprietary technologies like SpeedGuard, which is Enermax's fancy way of saying the two-ball bearing 120mm fan comes with intelligent speed control, with a mild RPM of between 450 and 2000. SafeGuard is the umbrella term for all the protection circuitry found on the PSU while AirGuard refers to the air intake design around the fan opening that supposedly leads to lower fan noise.

We did have some reservations however. Firstly, while it's commendable that Enermax can support up to four graphics cards, the relatively mid-range power rating (625W for the flagship model) may not be sufficient for high-end multi GPU setups. For example, a pair of NVIDIA's latest GeForce 9800 GTX requires a PSU of at least 750W. Perhaps Enermax should consider having a model of at least 800W output for the enthusiasts.

With its attractive feature list, it's no surprise that the MOD82+ 625W is one of the more expensive models for its power output at around US$199. However, for a relatively modest 625W PSU, the price tag may deter some consumers, while power users may find 625W insufficient for today's high-end system. If you have no such reservations, then this is a quiet, energy efficient performer with features that should stay relevant for the next three years at least.