Gone are the days when the PSU was just seen as an afterthought, when users did not mind the defaults bundled with their chassis. While less dedicated enthusiasts could live with generic PSUs in the past, many are demanding greater power efficiency, fueled no doubt by soaring electricity bills and growing environmental awareness. Vendors have responded in kind and Enermax's new Infiniti series looks to address these concerns. 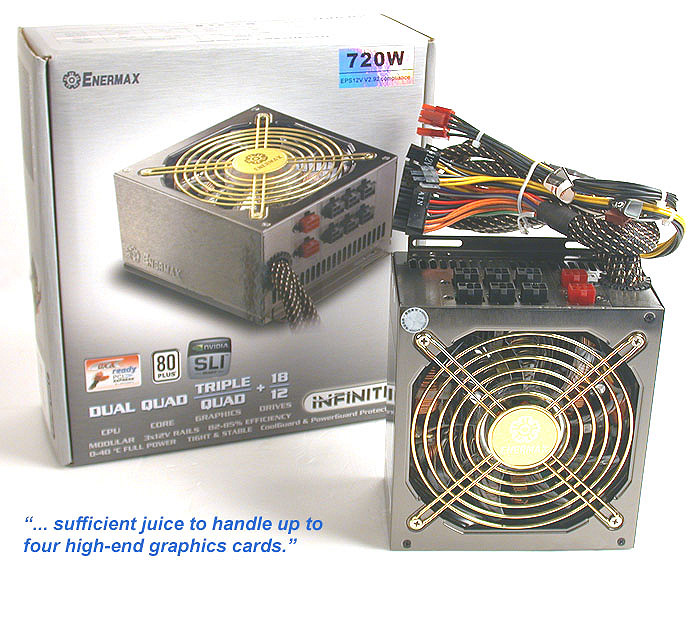 So what should a modern, top of the line PSU have? For starters, it probably has a host of certifications. For the energy conscious, this means having a 80 PLUS logo, indicating that the PSU is at least 80% power efficient for a range of loads and it should also have a true power factor of 0.9 or more. Then there is SLI certification for NVIDIA graphics cards, especially for high-end PSUs. The Enermax Infiniti 720 has both of these covered, with its power efficiency falling between 82 - 85% while its 720W output (672W for its three separate +12V rails) gives it sufficient juice to handle up to four high-end graphics cards.

ATI is the first graphics chipmaker to start using the new PCIe 2.0 eight pin power connector on its Radeon HD 2900 series but we should see more of such offerings soon. The Enermax Infiniti supports this new standard, with a connector that allows it to fit both six and eight pin configurations.

The other modern convenience is having modular cables. Out of the box, there are only four cables attached to the Enermax.

Other cables for the hard drives and optical drives, etc are separate and nicely sleeved. Users need only connect the number of cables that they require, so there's less cables to manage, an odious task for all but the obsessive compulsive.

Enermax has added in some unique features that try to add value to this high-end series. One is CoolGuard, which causes the PSU to continue to operate the system fans after the computer has been shut down, until either a lower temperature limit is reached or a time limit of two minutes. This removes the excess heat within the chassis and according to Enermax, can prolong the lifespan of your components. If it works as advertised, it is definitely an interesting feature.

The other Enermax feature is PowerGuard, a monitoring system that relies on a beeping buzzer and a LED at the rear of the PSU to convey different signals, from malfunctions of the PSU fan to standby mode for the PSU. Such signals would be of much help to users when troubleshooting problems.

The Enermax Infiniti 720 SLI is aimed at the high-end enthusiast and it looks the part, with its sleek exterior and host of modern features. Boasting power efficiency, quiet operation(thanks to its 135mm fan), modular cables and more than capable of supporting the most powerful rigs, the PSU doesn't come cheap either. Its estimated retail price is around US$219. Yet, we have no doubts that there are already many enthusiasts queuing up for its stellar features. Will you be one of them?