Over the past two years, we've seen the proliferation of Sound Blaster products utilizing Creative's X-Fi technology, which gives a marked up audio experience for consumers. The latest product to feature the X-Fi chipset is their flagship Creative Aurvana X-Fi Noise Canceling Headphones, which as its name implies, is built to block off ambient noise whilst improving upon your audio experience. 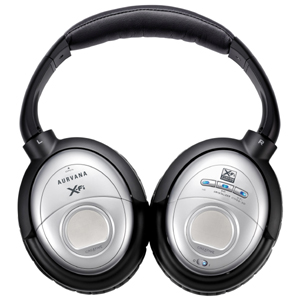 More than a Headphone

At a cursory glance of the Aurvana X-Fi's packaging, we have the following accessories found within: a 1.5m detachable copper cable, with an additional 1.5m extension cable, a dual jack airline adapter that allows you to use the Aurvana X-Fi with a 6.3mm output (such as those found on planes), and finally two "AAA" batteries to power up the X-Fi circuitry.

Design-wise, the Aurvana X-Fi manages to fit the contours of the head snuggly without an overtly tight headband. In fact, its headband is wrapped in a leatherette cushion, which definitely reduces discomfort due to abrasion, while the well padded and cushioned cans, complete with fabric inner lining holds the ears comfortably. Still, as with most headphones, prolonged usage can render some numbness on your ears, and this issue is present with the Aurvana X-Fi due to its slightly smallish ear cups.

The Aurvana X-Fi earphones feature active technology, which means that they require power to operate and can be turned on or off. These controls are located on the right ear piece, and they include Noise Cancellation, X-Fi Crystalizer and X-Fi CMSS 3D. In terms of active noise cancellation, the Aurvana X-Fi managed to block out simulated pink noise of 125Hz and 8kHz flawlessly, while allowing the mid range frequency of 1kHz to slip through. This is understandable since this model was designed to block out very low frequency noise like the low rumble of a plane for example.

Moving on to the main X-Fi technology, the whole premise of the X-Fi Crystalizer function is to enhance higher and lower frequency ranges by compensating for any signal loss on both spectrums, whilst keeping its mid-range untouched. This is prominently noted on our test of Led Zeppelin's re-mastered "Rock and Roll" track, compressed with a 192kbps bitrate, and played on a Creative ZEN Stone Plus player. In essence, we got a decent bass level from John Bonham's drumming without drowning out Robert Plant's strong vocal deliverance, pushing audio clarity up a notch.

Finally, the X-Fi CMSS 3D feature is available to deliver stereo widening effects. On the Aurvana X-Fi headphones, the 3D surround effect created by the X-Fi CMSS 3D pulls the high and low ranges to the sides rather than delivering a flat feed from the 40mm Neodymium drivers directly, giving you an audio experience akin to a large hall setting.

All in all, the Creative Aurvana X-Fi can be seen as a definitive creation from Creative. Its ability to be driven passively without batteries is a plus point, though that means excluding all the bells and whistles of course. It isn't a perfect creation, but the Aurvana X-Fi can easily give other noise canceling headsets like Bose's Quiet Comfort 3 a good run for its money with an RRP of S$499.