Nowadays, power supplies (PSU) vendors are all vigorously stressing their 'green' credentials. All the major players have released products that tout high efficiency numbers, corresponding to the increased awareness among consumers of the higher cost of electricity. The 80 PLUS program also appears to be a success, with its logo representing PSUs that are at least 80% efficient at typical workloads and now adopted by many vendors. Taking another shot at creating the ideal, highly efficient and silent PSU is Cooler Master, with a new Silent Pro series of PSUs. 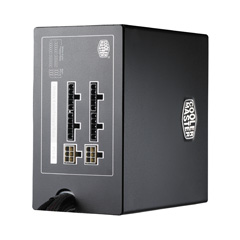 In the spotlight today is the Cooler Master Silent Pro M700, the highest end version of this new silent and efficent series. The vendor also has 500W and 600W models if 700W sounds too much. Besides the now typical 80 PLUS certification, this new PSU (at least 85% efficient) touts certain features that are meant to reduce the noise. These include having silicone pads between the chassis and the PSU to dampen the vibrations caused by the fan and the presence of a larger than usual 135mm smart fan.

Cooler Master also uses a mixture of copper and aluminum in its heatsinks for the power MOSFETs. This allows for greater dissipation of heat, leading to a cooler operating temperature and hence it can afford a slower, quieter fan. Cooler Master rates the noise level of this PSU at less than 16dB.

Another feature that may result in lower temperatures is the choice of flat modular cables. As you may know, modular cables allow for better cable management within the casing, since you have the choice of only attaching the necessary cables for your system. Cooler Master takes it a small step further by offering flat cables, which are even more of a space saver and are more flexible, making it easier to manipulate into a neat bundle if you are so inclined.

In a move to cater to power users, Cooler Master goes for a single powerful +12V rail instead of the more common approach of having multiple +12V rails. There are various pros and cons to this approach but overclockers generally prefer a single rail to maximize the PSU instead of having idle rails. To ensure sufficient power, the Silent Pro M700 has a 50A, 600W output +12V rail rated to support multi-GPU configurations and two 6-pin PCIe connectors are included.

With other modern PSU features like overprotection from various possible scenarios and its silent, high efficiency performance, Cooler Master's latest Silent Pro series of PSUs looks to be the real deal when it comes to satisfying the needs of the modern enthusiast. A five-year product warranty adds to the attraction and at around S$239, it is relatively affordable compared to other high-end PSUs, making it a recommended solution for any enthusiast.