While mainstream desktops and notebooks have been cutting back on the power consumption, the same isn't happening at the highest end of the performance spectrum. Despite the fact that enthusiast class processors, and even graphics cards (NVIDIA's Fermi-based cards notwithstanding) may have lower TDP ratings than before, it doesn't prevent users from overindulging with multiple graphics cards, all in the name of performance.

Hence, the wattage of power supply units (PSU) targeted at enthusiasts has only been increasing, such that nowadays, most brands have at least a few PSU models exceeding the 1kW mark. Cooler Master has extended its Silent Pro series, which already has a 1000W model further with the Silent Pro Gold; the main attraction being the new 80 PLUS Gold certification for all the PSUs in this series. The 80 PLUS Gold award isn't for every PSU, as only one that can exceed 90% power efficiency is eligible. The 80 PLUS website has a list of around 2000 PSUs, of which merely 10% received a Gold award. In short, it's an elite group that the Cooler Master Silent Pro Gold belongs to. The other half of the equation is 'Silent' and this is done by having a 135mm PSU fan that spins at less than 2000RPM at its maximum. An internal heatsink that's shaped in a 'L' is also claimed by Cooler Master to improve the heat dissipation, indirectly contributing to the lower fan noise. When we tried it out ourselves, the PSU was indeed very quiet, even as the system went through some intensive benchmarks.

As with such a high-end PSU, expect nothing but Japanese-made capacitors within it. Synonymous with quality, these capacitors have longer lifespans than cheaper versions and Cooler Master backs it up with a 5-year warranty for this PSU.

Another feature that's common for its class is modular cable management. Cooler Master has gone with flat modular cables that help to reduce internal chassis clutter and improve airflow. The default and fixed set of power connectors also include two 8-pin power connectors for the CPU so those more demanding motherboards with two 8-pin connectors will find them handy.

With four PCI-e 6+2-pin connectors and the single +12V rail providing up to 98A, it supports the latest graphics cards, though those trying for quad SLI or CrossFireX setups will find the number of connectors insufficient for this purpose. 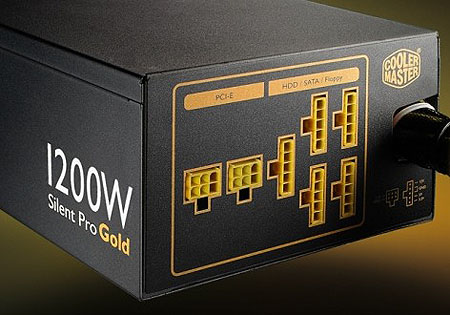 At around $429, this power supply unit certainly commands a premium price. There's no doubt that it's aimed solely at enthusiasts who are looking for the high efficiency and wattage afforded by this model. For the rest of us who can't see ourselves building the ultimate rig, we're better off saving the budget on something more critical, like the processor or graphics card.