If Kate Moss, the famously thin supermodel, had an equivalent in a Bluetooth headset, that will surely have to be the latest Bluetrek Metal. A definite head turner, KJC's foray to strengthen their hold in the local Bluetooth market has just gotten that much stronger based on our initial impressions. 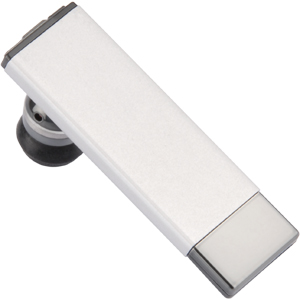 If the box was anything to go by, the Bluetrek Metal's pedigree of a product by a famous designer shows. Right from the start the packaging gave us mixed feelings; on one hand, the design was fabulous, on the other, we had a hard time trying to take out the entire package, with only one usable opening on the top of the box.

Once we managed to get to the Bluetrek Metal, we cannot help but marvel at the amazingly thin (4mm thick body!) and light headset, and the aluminum body seems solid enough to withstand drops (not that we did try, though we wished we did). Accessories within the package include a USB adapter for charging the headset and a clip holder, which is oddly out of place with the Bluetrek's sleek design. Suffice to say, you will probably avoid using the clip if you wish to retain the cool factor of the Metal. According to KJC, an AC adapter will be bundled together with the package once it is available in the market.

The actual unit is one of the sleekest headset we have ever seen, with only 3 tiny buttons found at the tip of the headset. Pairing is easily done by pressing and holding the middle button for a few seconds until the unit's well concealed LED (near the mic) starts flashing red and blue. Voice quality is generally good, with both parties having no issues when having the conversation in a moving vehicle along the expressway. However, within enclosed space, we noted a slight static on both ends of the conversations, which could probably be due to the thickness of the walls.

Minimal as they may be, the 3 tiny buttons presented foreseeable challenge when we were having a conversation while driving. With the small buttons so closely packed, our attempts to lower the volume actually ended the conversation prematurely. This, however, is more of an issue of adapting to the device rather than a deal breaker for the product in our opinion. Battery life is generally acceptable; it should last you for a day with sporadic phone calls, but nothing more.

So, is it worth your money? Frankly, the Bluetrek Metal is probably one of the slimmest Bluetooth headsets you can get from the market now, and with a RRP of only S$88, you will be hard pressed to find another headset in such a thin stylish package at under S$100.

Granted, it does not come with noise canceling features, nor does it support the A2DP profile seen on many other stereo Bluetooth headsets, but unless you really need those features, the looks of envy you'll get with the Bluetrek Metal will more than make up for that.