At first glance, BlueAnt's Supertooth 3 cuts a surprisingly large profile, bigger than even the Nokia E71 or the Samsung INNOV8. Looks however can be deceiving as it is relatively light. Built specifically to be used in a car, the large size is not a disadvantage. The Supertooth 3 looks simple enough with a total of only 4 buttons in the entire unit.

A strong magnet is also found at the back of the unit, which works in tandem with an included metal clip to hold the unit in place. Needless to say, we have the standard accessories such as a car charger and AC adapter within the package. 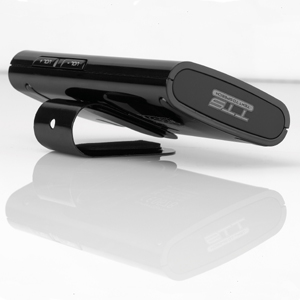 The initial pairing was a smooth experience, aided in part by a quick reference to the manual. What got us pleasantly surprised were the voice prompts, which are not common in Bluetooth handsfree units. The downside? Due to its additional TTS (Text-To-Speech) functionality, you will need at least 5 to 10 minutes (depending on the length of your contact list) for the phone to transfer contacts to the headset.

By doing so, you'll be informed of the incoming caller's identity via a voice prompt. This is an extremely useful and road-safe feature for drivers since they have to keep their eyes on the road, not the phone. When no contacts are available, Supertooth 3 will simply announce the number.

Another interesting function to note is the ability to answer a call via a voice command like "Accept" or "OK". This is easily activated when you press and hold the "vol+" key for a few seconds. We got some mixed results during our tests. When used in conjunction with a phone ringing in the background, we simply cannot get the unit to pick up the calls via our voice command. This could have stemmed from the ringtone interfering with the microphone picking up our command.

To test this theory, we switched our phone to silent mode and indeed, the unit was able to pick up our command after that.

Battery life was good for the unit, clocking in at least three days of use. This can be attributed to the fact that users will seldom use it out of their vehicles. Plus, with a larger girth, the unit has the capacity to house a more powerful battery than normal headsets. Voice calls with the Supertooth 3 were handled admirably. There were a few complaints from callers with regards to echoes during calls, though in a closed environment such as a moving vehicle, it is perhaps inevitable that this may occur.

On the flipside, we had no problems listening to conversations in a moving vehicle, with our radio turned to mid-low volume.