No, it's not a Sony PlayStation 2. Yes, the image here and the others on ASUS' website may have reminded us of Sony's legendary console but once we unpacked it, there's no mistaking that we're only looking at an external Blu-ray combo drive, albeit in a slim and glossy package. 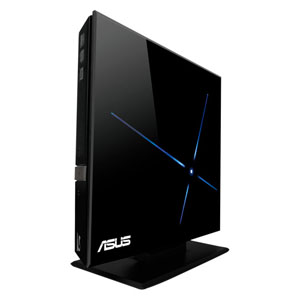 The ASUS SBC-04D1S-U Blu-ray combo drive has a mouthful of a name but that pales in comparison to the sheer amount of gloss on its exterior. Even the support stand is a magnet for fingerprints and dust. While removing it from the packaging, our grubby fingers quickly left a trail of smudges on its surface.

To make matters worse, our attempts at cleaning with a cloth resulted in a thin layer of dust particles. You get the point.

While touching this portable combo drive without a glove will result in numerous fingerprints, the fact is that this drive is so light that it is meant to be held and carried around. You can also lay it flat without the stand and it will be kept in place by non-slip rubber feet.

Capable of playing single and dual-layer Blu-ray discs up to a maximum speed of 4.8x, this ASUS combo drive can even play HD DVD-ROMs. So if you had chosen the wrong side in the high-definition format war, your discs are not obsolete yet. DVD-ROMs can be played at up to a maximum of 8x, which is not exactly light speed but adequate for movie playback purposes.

As it's a combo drive, it also comes with basic DVD write functionality, though again, it's rather slow compared to dedicated internal DVD writers.

Of course, no Taiwanese IT product is complete without the manufacturer trying to impress consumers with some homegrown software utility that more often than not, tries too hard. ASUS has included a utility called BluTuner that apparently allows the user to adjust the brightness level of the blue light at the side of the drive.

We suppose that's useful while watching movies in the dark when that blue glow can quickly get on one's nerves. Besides the BluTuner utility, ASUS did bundle useful applications like PowerDVD and Power2Go.

Powered only via two USB 2.0 ports (which speaks volumes about its low power consumption), this combo drive played our discs without a hitch and crucially, it was rather quiet. A slot loading design would be an improvement over the current tray loading version from both an aesthetic and practical sense, but that's a minor quibble.

Next, the base of the stand could also have been more sturdy and heavier to prevent instances of the drive toppling over but that too would have affected its overall weight and portability.

Overall, ASUS has crafted quite a sensible and portable external Blu-ray combo drive that won't add much weight to your notebook while offering Blu-ray and DVD functions. It will quickly end up a sorely smudged device without regular cleaning but we don't doubt its utility and convenience.