Power supply units (PSU) are among the least glamorous of tech products but to the DIY enthusiasts, they are the bedrock on which their expensive systems depend on. Hence the seemingly exorbitant premium that they are willing to sell out for PSUs that are not only powerful but rock stable. The other angle is power efficiency, something that the industry has embraced with the 80 PLUS certification program. Having such a stamp of approval has become an important aspect of marketing a power supply. Antec's latest high-end PSU, the TruePower Quattro 1200 promises both power and efficiency. All this in a red and black racing-striped package. 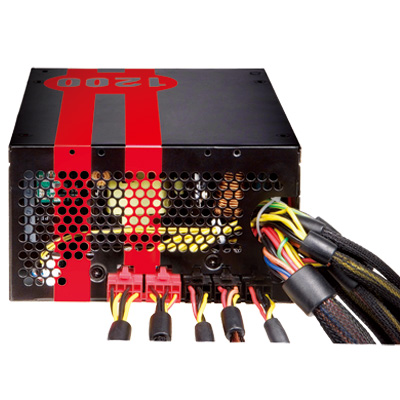 We had previously taken a quick glance at the 1000W Antec Quattro, which came with a 80 PLUS Bronze certfication. The 1200W version improves on this with a Silver award. What's really different on the 1200W is the addition of a new feature that Antec calls PowerCache. These are additional capacitors that Antec claims to provide the extra power boost when required. They are located on the cables, which means that the cables budge out where these capacitors are. Not all the cables get this treatment; only the critical ones like the PCIe graphics connectors.

Of course, this means that despite its modular cable management design, this Antec PSU comes with quite a handful of fixed cables. In fact, the average user may not even need to unpack the optional modular cables, as the default installed ones are sufficient.

As we mentioned, the modern high-end PSU boasts of both power and efficiency. For its TruePower Quattro series, Antec measures the continuous power output, and not just the peak. Six separate +12V rails are provided, with a maximum total power output of 1200W. Don't lose the power cord that's included though, as it is a slightly different C19 connector that's preferred for higher end PSUs. It's not like you can replace the power cord simply by swapping in from your older PSU.

Finally, all the marketing points are ticked on this PSU, from its NVIDIA SLI/CrossFireX certification, to Active Power Factor Correction and system protection ranging from over-voltage to over-current. Antec also uses a pulse-width modulation enabled 80mm fan to adjust the fan speed and by extension, the noise produced by the PSU.

With retail prices in the U$220 - 240 range, the Antec TruePower Quattro extends the series with yet another high power output unit. The increased novelty of the PowerCache feature could be a decisive factor for those thinking of investing into a stable, power-efficient PSU. For those with more modest needs, the bulk of the PowerCache-enabled cables and the substantial PSU casing and wattage will be mostly overkill.