When we mention the Italian word for four, 'Quattro', the first association among English speakers is most likely to be that of the Quattro, a well-known rally car model from Audi. Car buffs may also know that 'quattro' refers to the four-wheel drive system found on an Audi automobile. In tagging its premium PSU series with a similar 'quattro' moniker, is Antec hoping to carry over that positive impression? Let's find out, shall we? 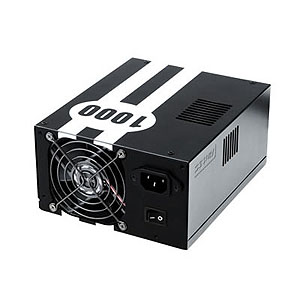 While it's not stated explicitly by Antec, we venture to guess that the 'quattro' in this Antec PSU series refers to the four 12V output rails that splits the rather impressive power output of the PSU. Although PSUs with high wattages are more common than before, the 1000W rating for this Antec still puts it as one of the more powerful units currently in the market. The four 12V rails themselves contribute up to 840W of power.

Meanwhile, with its appropriate number of 8-pin and 6-pin PCIe connectors, the Quattro has both the power and the right connectors for the highest end possible SLI rig of a pair of NVIDIA's GeForce GTX 280 graphics cards. Of course, this means that ATI's CrossFire is also supported, even if there is no formal certification.

It's a badge of honor now to be power-efficient and Antec has been one of the earlier vendors to achieve 80 PLUS certification for its products. For the case of the Quattro, it is rated at 85% efficiency, putting it above the minimum 80% required and earning a decent Bronze accolade from the 80 PLUS programme. With Gold the highest possible certficiation however, the Antec Quattro still has some way to go.

This power efficiency and the resultant lower operating temperature of this PSU means that Antec was able to include a modest 80mm cooling fan that is extremely quiet and which barely produced any noise when we tested it. The PSU itself is shorter and slightly smaller than some other competing models we have seen, so users should find it easy to install in any standard ATX chassis.

Next, another important feature that's part and parcel of a modern PSU is the presence of a modular cable management system. Cable clutter is drastically reduced with modular cables that are only plugged in when needed. Along with this convenience are also various standard, protective circuitry that enable the PSU to emerge relatively unscathed in scenarios like over-current, over-voltage and short-circuit.

As a high-end PSU, the Antec Quattro certainty feels like one, from its build quality to the whisper quiet performance. From features like modular cables to its PCIe connectors for the highest end graphics cards, it is clear that this PSU caters to the gaming enthusiast. Yet the best part about it may be its US$189 price from online retailers, which is amongst the cheapest we have seen for a 1000W PSU from a big-name vendor. There may be more power efficient competitors out there but at this price, it's unbeatable for its value and we highly recommend it.