Finalmouse Air58 Ninja review: There’s no such thing as a mouse that’s too light

Finalmouse Air58 Ninja review: There’s no such thing as a mouse that’s too light

Note: This article was first published on 11th February 2019. 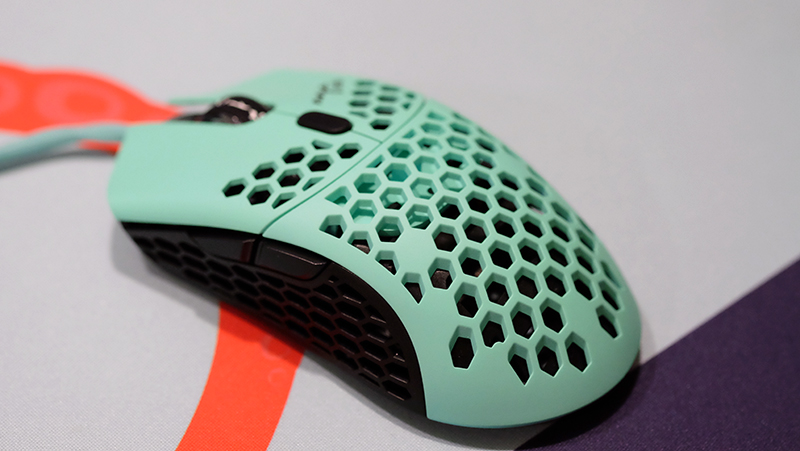 Can a mouse ever be too light? That’s probably one of the first questions that’ll come to mind when you hear about how light the Finalmouse Air58 Ninja is. At a sprightly 58g, this is one of the lightest gaming mice you can buy today. In fact, I can’t think of a lighter mouse now from any of the major players in the scene.

The Air58 Ninja is an ambidextrous mouse, but it has two side buttons on the left that only right-handers will be able to use. Still, the shape of the mouse is excellent, and it feels like it’ll work well with all grip styles. It does seem particularly suited for the palm grip though, thanks to its long and wide shape. This is a fairly large mouse, measuring 128 x 60 x 40mm. And while I generally prefer smaller mice, this mouse is so light that I’m able to use it pretty comfortably despite having smaller hands.

I know some people prefer heavier mice because they feel it helps them steady their aim, even adding weights in mice that come with them (honestly, stop that), so you should look elsewhere if you fall into that camp. Still, I cannot overstate how good a mouse this light is. It glides over your mousepad with ease and it feels gloriously agile and nimble. Having used the Logitech G Pro Wireless for a time as well – it's really light in its own right at just 80g – I can also say that there’s a perceptible difference moving to the Air58 Ninja. 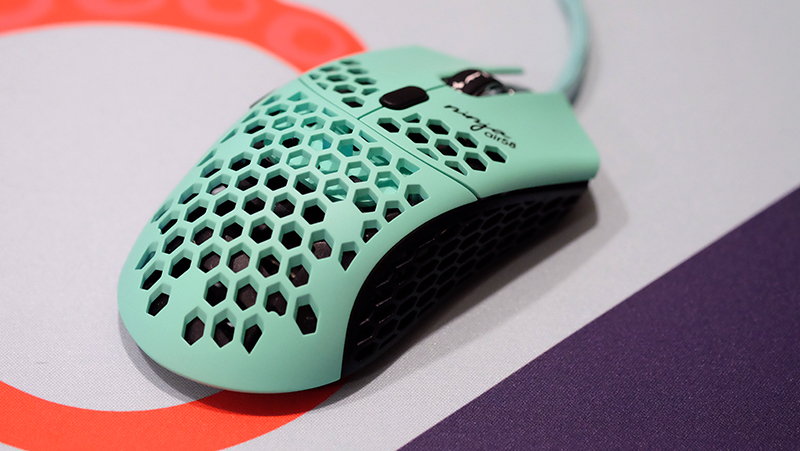 That said, I can imagine that the mouse’s design can be pretty polarizing. If you have a particularly bad case of trypophobia, I’d imagine you’d want to stay away from it. Finalmouse basically cut the weight of the mouse by punching a ton of hexagonal holes into the top, sides, and base of the mouse. After all, less material means less weight. 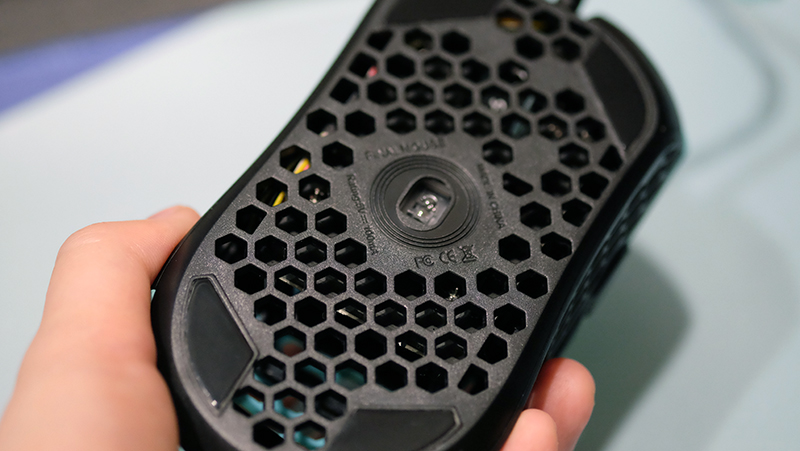 However, while the design might raise some concerns about comfort, the good news is that the perforated surfaces didn’t really bother me much at all. The mouse was no more difficult or uncomfortable to use than a regular mouse, and it was as if the holes were not there. Sure, the texture feels different, but different doesn’t always mean bad. More importantly, the perforations only cover about a third of the mouse buttons, so your fingertips – probably the one part of your hand that would be bothered by the hexagonal cutouts – still come into contact with a solid surface.

Build quality also doesn’t seem to have been compromised much at all. I was admittedly worried about things like structural integrity and flexing, but there’s surprisingly no give to the sides of the mouse at all. There are no distracting creaks or flexing when you grip the mouse, and it feels really well put together. The mouse buttons are also formed of separate pieces of plastic from the main body, which is generally a better and more durable approach.

The matte coating on the mouse looks and feels like quality stuff. The soft-touch surface is really comfortable, and I haven’t had any build-up of dirt or grime even after using it for long hours. The Air58 Ninja is available in either Cherry Blossom Blue (pictured here) or Red, and I have to say that this is also one of the prettiest shades of blue I’ve seen around. 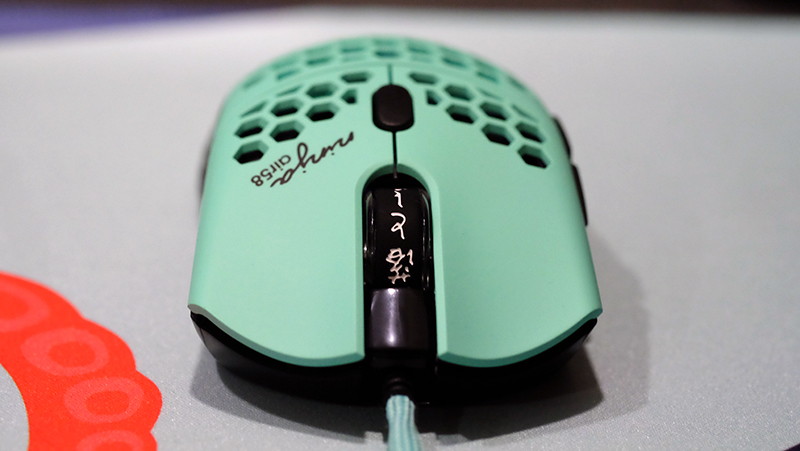 The buttons feel good to use as well, and they don’t feel mushy and provide decent feedback. The scroll wheel works well enough, but it is on the lighter side and I do think the individual notches could have used slightly more definition. That said, it’s also one of the more distinctive features of the mouse, and Finalmouse says each mouse has a unique, hand-painted haiku in Japanese. This does feel a little gratuitous, considering that Tyler “Ninja” Blevins, the popular Fortnite streamer who collaborated with Finalmouse on the Air58, has absolutely nothing to do with Japan save for his name. 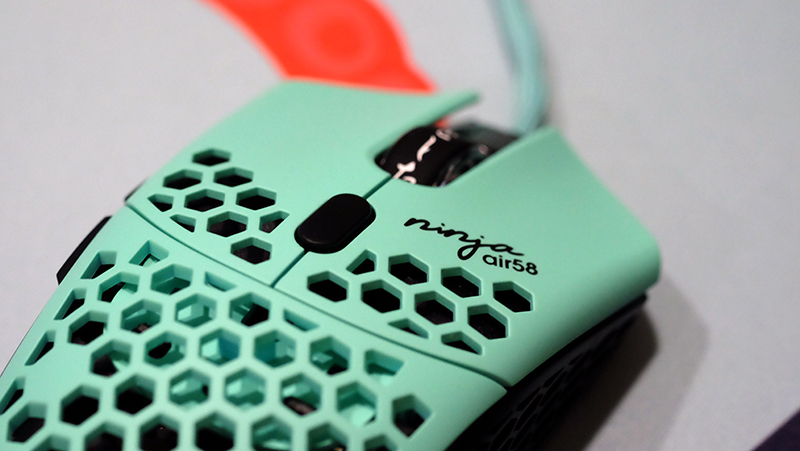 A DPI toggle button sits below the scroll wheel, and it lets you cycle between steps of 400, 800, 1,600, and 3,200DPI. The Air58 Ninja has gone with a driverless operation, so you’re limited to these preset DPI stages and Finalmouse isn’t providing any software to change this. In addition, the mouse ships with a 500Hz polling rate.

The preset DPI stages worked for me, since I usually play at 800DPI, and I didn’t really notice anything averse with the lower polling rate. I think the DPI stages cover most of the commonly used sensitivities, but if yours is different and you don’t want to change your sensitivity in-game, you can download Dream Machines’ DM1 Pro S software to change it. The software was made for the company’s DM1 Pro S mouse, but it’ll work for the Air58 Ninja too, and you can bump up the polling rate to 1,000MHz as well. For the record though, Finalmouse doesn’t recommend changing the polling rate, citing possible damage to the sensor and voiding of the warranty, so you do so at your own risk. 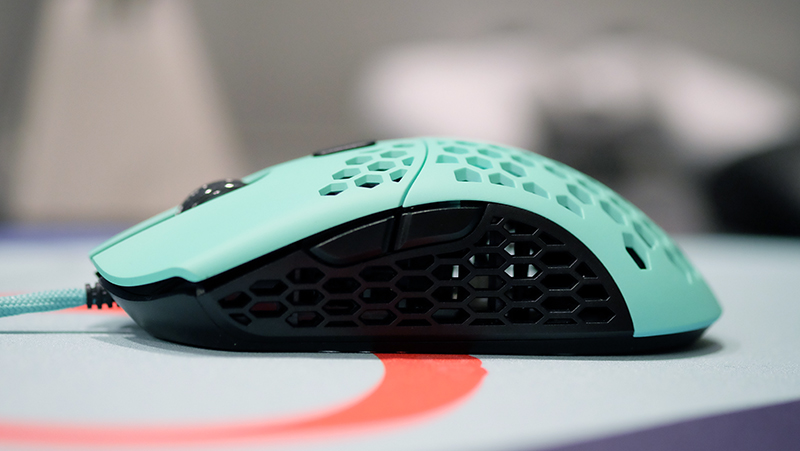 The Air58 Ninja is equipped with the PMW3360 optical sensor, the same as the Ultralight Pro from Finalmouse. It tracks flawlessly, with no discernible acceleration or smoothing. Furthermore, liftoff distance is really low as well, falling somewhere between 1-2mm. You won’t have any problems tracking with this mouse, and the only question will be whether you like its size and shape.

The cord on the mouse is similarly excellent. A lot of mice are literally dragged down by a stiff, inflexible cable that interferes with the their movement, but the Air58 Ninja’s cable is wonderfully soft and flexible. It even matches the shade of the mouse perfectly, so hey, bonus points in the aesthetics department. 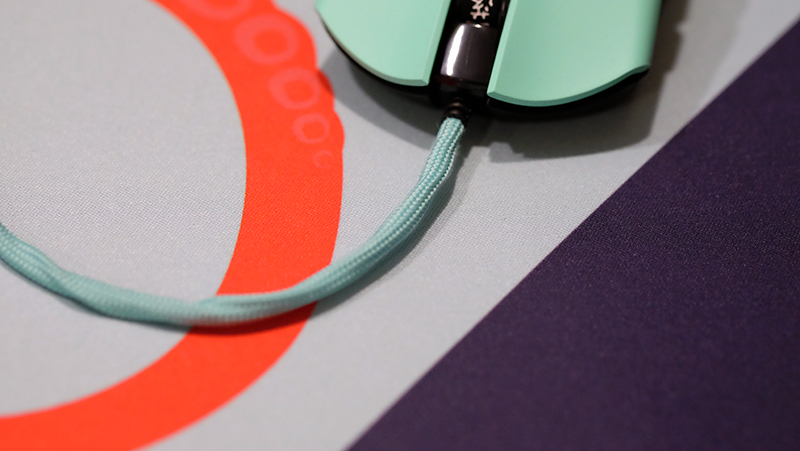 So does it live up to the hype?

The Air58 Ninja sits at the center of a lot of controversy. Finalmouse hyped up the mouse so much that it was nearly impossible for any product to live up to it, especially one that turned out to have the same shape and sensor as the company’s existing Ultralight Pro. The company basically recolored the mouse, tweaked it and made it lighter, all while claiming that “everything was redesigned from the ground up”. It’s understandable why fans might be bitter about it, having been primed to expect so much.

Furthermore, Finalmouse slapped Ninja’s name on the right mouse button, despite earlier saying that the mouse would not be branded. In the same tweet, the company went so far as to call the mouse a “museum piece” and “beyond branding”. I mean, come on, seriously?

For a further look at the type of manic, hyperbolic marketing Finalmouse is fond of, here’s a screenshot of the latest pinned tweet on the company’s page: 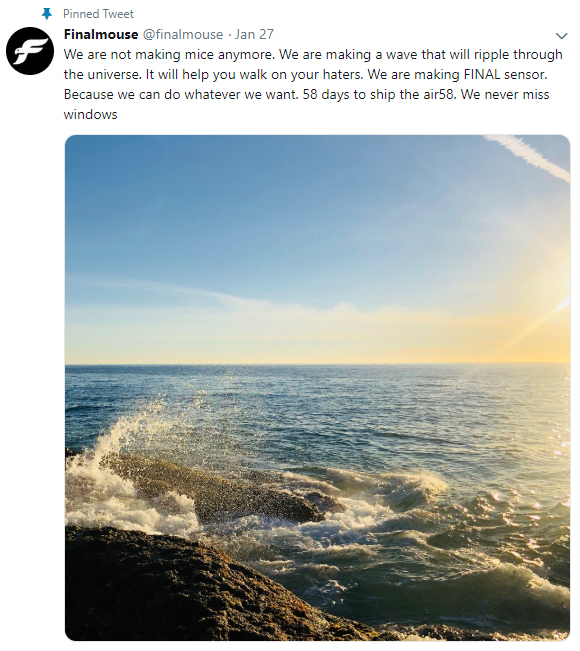 To add insult to injury, the Air58 Ninja is ridiculously hard to get. It’s sold out everywhere now, and short of paying crazy prices from resellers, it’s not clear you’ll be able to get one any time soon. Finalmouse is known for its limited time drops, which some people see as a way of artificially creating excitement around a mouse, so it’s not hard to see why the company doesn’t have the best reputation either.

Having said all that, I’m here to review the mouse, not the company. When separated from its over-the-top marketing and unrealistic expectations, the Air58 Ninja is still a very good mouse. It has a great sensor, a comfortable shape, and is freakishly light. It’s a mouse made for competitive FPS players, and the weight is really a huge point in its favor. It even has a light and flexible cord, an area that’s still woefully overlooked a lot of the time. What’s not to like? It also costs US$89.99, which isn’t crazy expensive either. Now, the only problem is getting your hands on one.

Write a Review
Compare This | Specifications
Comfortable shape
Super light weight and agile handling
Soft and flexible paracord cable
Accurate and reliable optical sensor
Other than the weight, not much has changed from Finalmouse's previous mice
Extremely limited availability
No drivers for those who want further customizations
Limited to 500Hz polling rate
Our articles may contain affiliate links. If you buy through these links, we may earn a small commission.
Sponsored Links