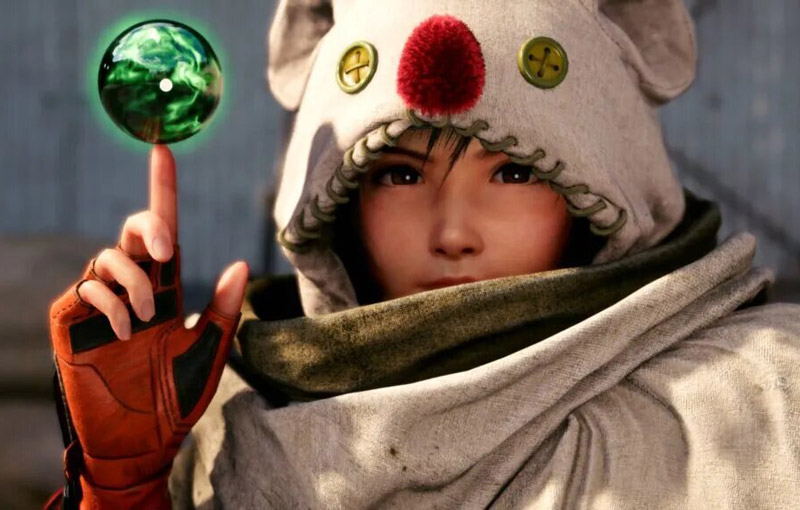 Better keep your Materia on a tight lid.

Final Fantasy 7 Remake’s souped up PlayStation 5 version Intergrade comes with a brand-new story expansion that breaks away from the world-saving endeavours of Cloud and his party. Instead, this DLC - aptly titled Intermission - takes place halfway through the main game’s story, when Cloud is separated from his companions. Enter Yuffie Kisaragi, a ninja who enters Midgar with one mission: to steal Shinra’s ‘Ultimate Materia’, whatever form it might take.

This new story campaign isn’t terribly long, stretching just past five or six hours if you indulge in all the available side content. It's a fun way to see all the new upgrades Final Fantasy 7 Remake has received on the PlayStation 5 however, without having to replay through the entire campaign again. Yuffie is a breath of fresh air as the new protagonist, and the story adequately fleshes out the Wutai ninja before she inevitably joins Cloud’s party in later sequels.

Intermission serves up all the bombastic bossfights and quirky characters one might expect from the main game, but its gameplay is disappointingly linear and repetitive by comparison. Let’s get into it. 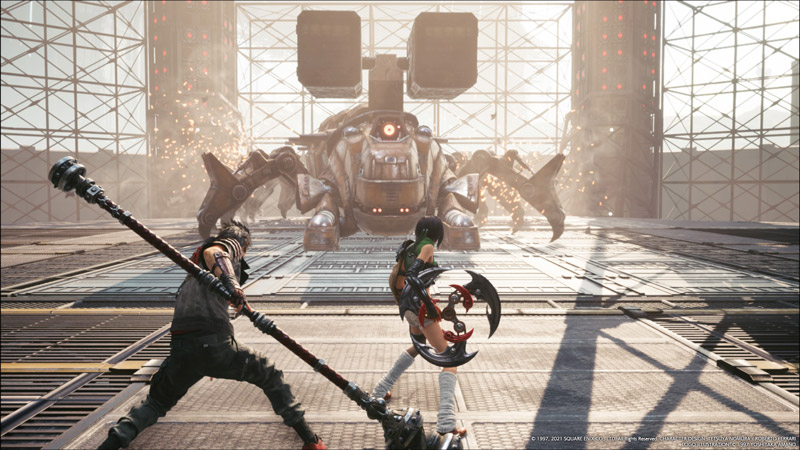 Yuffie Kisaragi has come all the way from Wutai Village to steal Shinra’s Ultimate Materia in Midgar, and she does so with all the giddiness of a tourist finding nothing but novelty in their new surroundings. As the main and only playable character of this DLC, she’s a stark contrast to Cloud - the stoic and often-grumpy soldierboy, though we love him for it. The very moment Yuffie is introduced, she’s rehearsing a boisterous speech to AVALANCHE on her new mission - to an audience of none. She’s all pep with a big heart, and that gives Intermission a refreshingly loose tone from the get-go.

That being said, Yuffie definitely takes time to grow on you. Her sunny disposition coupled with her slapstick levels of clumsiness can be grating in the first hour-ish of this DLC when she’s alone, but that goes away quickly once she makes some new friends. It doesn’t take her long to get partnered up with Sonon, an older soldier who also hails from Wutai. The duo share a fun dynamic, with a seemingly more experienced Sonon constantly at the mercy of Yuffie’s chaotic leadership. He might get exasperated by her penchant for style over stealth, but it’s clear that the two care about each other like siblings. That relationship deepens over the course of this story, and pays off in surprisingly emotional dividends as things wrap up. 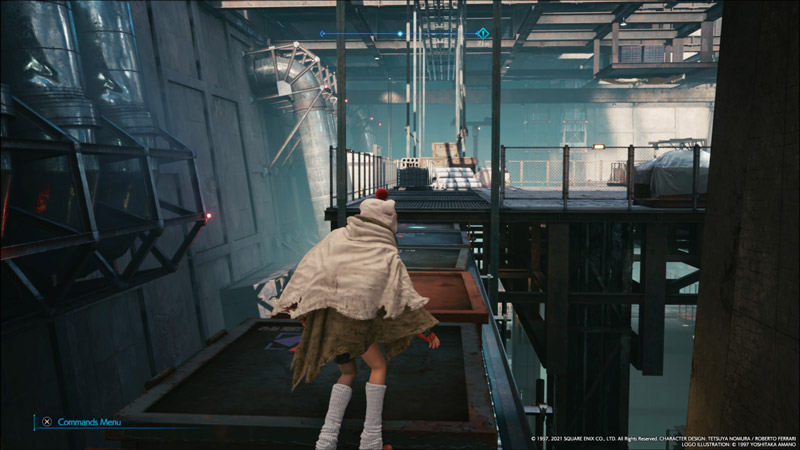 If you’re not a fan of the original Final Fantasy 7 and thus have no attachment to Yuffie, Intermission is still worth checking out if you liked the Remake. Characters from the main story pop up in small moments I’d rather not spoil, and you get to interact with other familiar inhabitants of Sector 7 from a different perspective. One funny little touch I appreciated is that if Yuffie tries to enter the Seventh Heaven bar to meet Cloud’s companions, a gust of wind blows her away - a clear sign that the fates are keeping her from intervening, just like they did in the rest of Remake.

I do have one big bone to pick with this campaign. There is a novelty in revisiting locations from the main game as Yuffie, but I really wish Intermission had taken this chance to include parts of Midgar we’d never seen before instead. It would have allowed for some much-needed environmental variety, as a lot of this DLC feels oppressively linear. The majority of this campaign, especially its second chapter, mainly involves Yuffie travelling from metallic corridor to metallic corridor with the occasional room full of enemies thrown in. The only thing pulling me through all this repetition was the occasional string of banter between Yuffie and Sono. Otherwise, there is absolutely nothing interesting about running from one corridor into another for two hours (or more).

Is that a tuft of Phoenix Down I see? 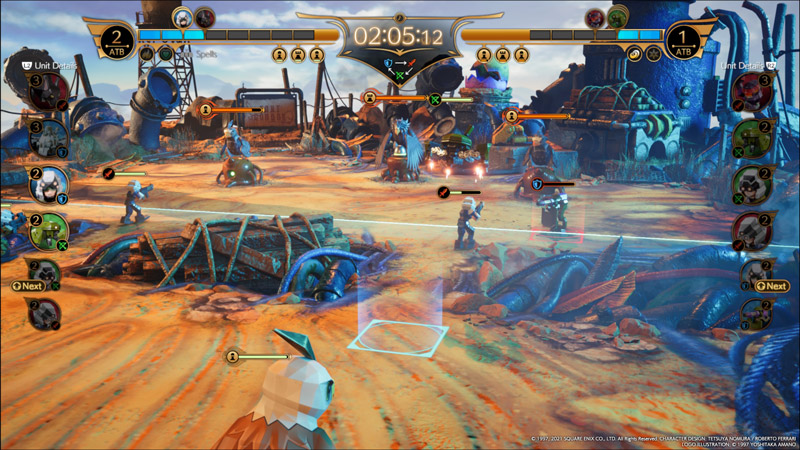 Unlike the main game, you don’t get to control party members in Intermission’s combat encounters. Instead, Yuffie and Sonon can team up using the new ‘synergy’ ability, which lets them execute attacks together for lots of damage. Sonon can still be given commands to use abilities, spells and items though - so that lack of control never feels like an issue. Otherwise, combat is the same slick affair I loved in the main game, and you even get a great new Summon if you pay Chadley a visit in Sector 7. I’d rather not spoil the game’s big bosses, but they feel like awesome setpieces worthy of the main game too, complete with new music that I really wish would hit Spotify already.

Yuffie’s iconic shuriken weapon plays an interesting role in gameplay. Traversal puzzles now boil down to scanning the environment for objects out of range, and throwing Yuffie’s shuriken at them to unlock the next location. There’s some Uncharted-like climbing sequences as well, and both of these new mechanics feel like fun ways to mix up Final Fantasy 7 Remake’s methods of exploration. As I mentioned before, most of this DLC can be boiled down to running up and down narrow corridors, but I do hope we see the sequel incorporate these ideas too.

Intermission also comes with a new Fort Condor minigame. A Sector 7 sidequest sees Yuffie walking around and challenging random NPCs to a round of Fort Condor just like Geralt’s frequent Gwent detours in The Witcher 3. This is a tower defense minigame that feels a lot like Clash Royale - mixing elements of the tower defense and card-collecting genres together. Your objective is to destroy the enemy’s main ‘tower’ by carefully managing resources to place down troops - while also defending your own towers. I was pretty surprised by how much I got into these Fort Condor minigames, despite there not being much depth to them - you get all the troop cards you need by completing other sidequests. Fun stuff overall, and I wouldn’t mind it being brought back for the sequel. 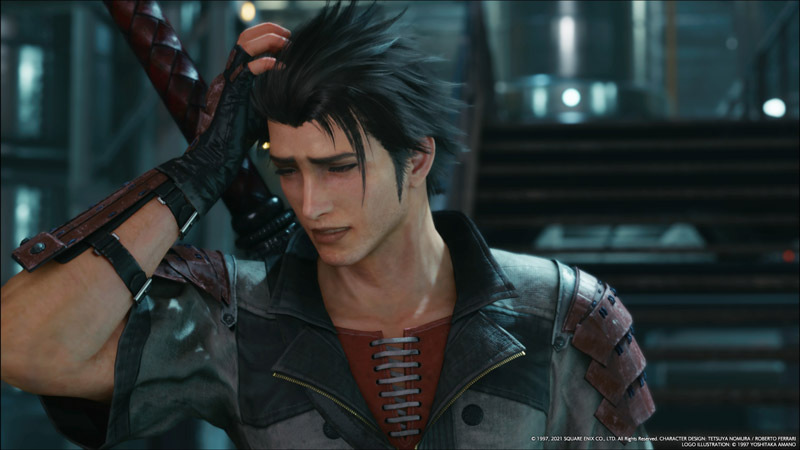 Episode Intermission feels like one of the more skippable additions to the larger world of Final Fantasy 7 yet, but it does set Yuffie up for future appearances rather well. I wasn’t a huge fan of Yuffie in the original game (Vincent Valentine all the way), but I feel a lot more invested in her arc after the events of Intermission. There are quite a few villains introduced in this DLC who will surely return to haunt Cloud’s party down the line, and that makes this four-to-six-hour jaunt feel worthwhile.

If Episode Intermission didn’t clumsily set up these villains with little to no context and offer players nothing new to see in Midgar however, I’d have an easier time recommending this DLC. It definitely lives up to its name by offering just enough to keep us all busy, while we patiently wait for the main event.

Write a Review
Compare This | Specifications
Beautiful PS5-upgraded visuals
Combat gets some fun additions
Bossfights are spectacular as always
Sonon is great
Refreshing change in protagonist
Feels too linear and repetitive
Yuffie takes some warming up to
Side quests are still terribly boring
Feels like a retread of the main game's locations when it could offer something new
Our articles may contain affiliate links. If you buy through these links, we may earn a small commission.
Sponsored Links