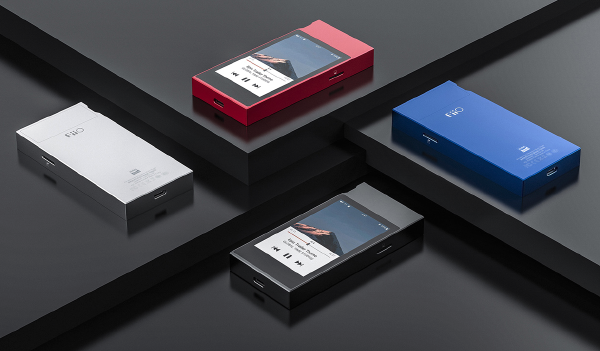 If you’re into audio, you’ve probably heard of FiiO, the audio company from Guangzhou (China). They started from audio accessories and speakers before moving on to portable Digital Analog Converters (DAC) and Amplifiers for laptops and smartphones, and later Digital Audio Players (DAPs) like their first FiiO X1. They’ve also started creating high-end in-ear monitors like the F9 triple-drivers, and throughout it all the company has built-up a steady following thanks to the fact that their products have generally offered a good balance of features and quality to price. The subject of today’s review – the FiiO M7 is no different, as it’s a High Resolution Audio (HRA) player with a touch screen that costs just S$329. Despite the low price, the M7 comes with a 3.2-inch touch display (800x480 pixels), a dual-core Samsung Exynos 7270 processor, and a Sabre ESS 9018Q2C DAC chip for speedy conversion of audio.

It also comes with Bluetooth 4.2, with support for aptX-HD, aptX and even Sony’s LDAC format, thus allowing for quality streaming of High Resolution Audio (HRA) files. On that note, the M7 supports playback of APE, WAV, FLAC, AIF, DSD, M4A, WMA, OGG, AAC, ALAC and MP3 files, so it’s safe to say your music library should be comprehensively covered.

According to the website, the M7 will come in a total of four colors – black, blue, red and silver, but only black and silver are available locally at the moment. It measures in at a compact size of 109 x 52 x 13mm and weighs just 116g, so it should easily fit into your pocket when you’re on the move. It comes with 2GB of internal memory but that's easily expanded via a standard microSD slot. 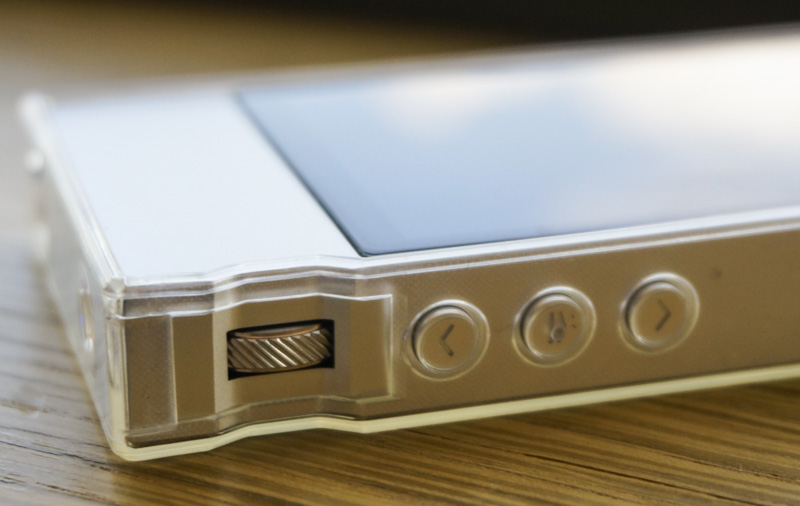 The M7 is very smartly designed, with just four physical buttons (including the power button) on the player. Volume control is via a scroll wheel on the left of the player, and this is stepped for more accurate control. You can even disable the buttons when the screen is locked, so you won’t accidentally skip tracks when your player runs against something else in your pocket. It's definitely a thoughtful touch as trying to pull the player out of the pocket would often result in tracks being skipped, so the option to disable the buttons for our extended use is most appreciated.

On the touchscreen front, we’d say touch navigation is well implemented with this DAP, as it allows you to easily browse through your music collection or go through the settings on the player. There are two global shortcut gestures too – slide your finger up from the bottom left corner of the screen to go back a step. Slide it up from the bottom right, and you jump back to the main page. Simple, but effective. 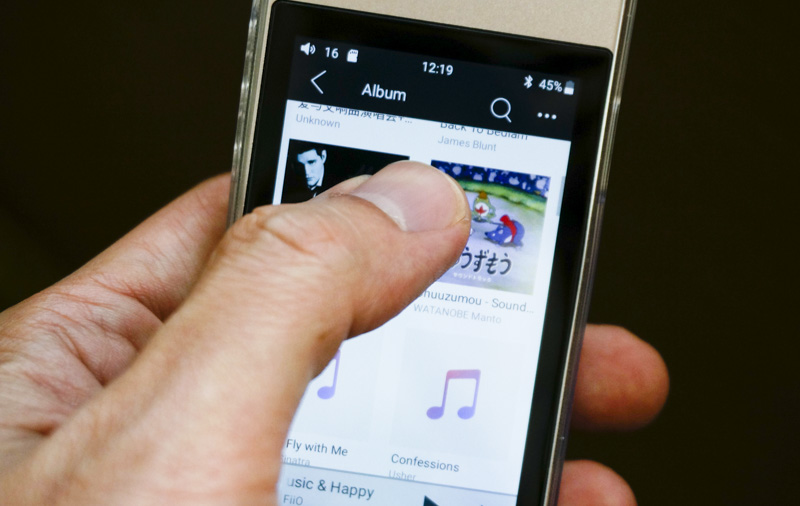 Despite being Android-based, there are no options that allow you to download apps, so you’ll have to root the DAP and even then you would need some creative workarounds to do so, but the lack of Wi-Fi support probably means it won’t be worth the effort. Thus, it’s good that FiiO’s own music player gets the job done without too much fuss. Browse via Album, Artist, or Genre with a couple of taps, and swipe up and down to easily scroll through your list of files.

While we like that FiiO provided a microSD slot for easy expansion of internal storage, we wish they had taken a leaf out of HiBy’s book and offered a push-out tray like what’s on the HiBy R6, as that would eliminate the risk of your microSD card being ejected out of the player (and make it easier to install too). 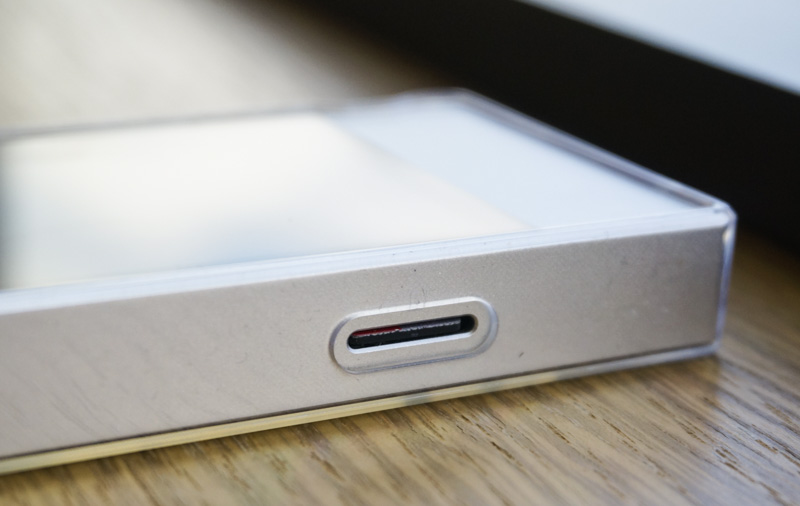 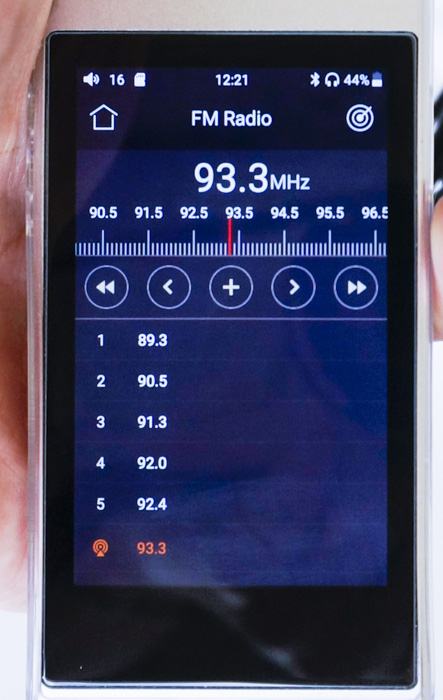 The M7 comes with a USB-C port for faster charging and transfer. This also feeds audio out, so if you have a USB-based headphones set, you can feed it audio directly. There’s also a built-in FM tuner so you can use your headphone’s cable as an antenna to get live radio on the go. This works surprisingly well, though we did wonder if they would be able to offer an antennae accessory that went into the 3.5mm audio jack so you’d be able to continue using your wireless headphones. Something for FiiO to consider for the next revision perhaps?

All in, the M7 is a handsome-looking DAP that easily fits in your palm without having to sacrifice any functionality or ports to do so.

We tested the M7 with a variety of headphones, both wired and wireless, and the DAP powered them all nicely. We especially liked pairing it with our Sony MDR-1000x, taking full advantage of LDAC for wireless listening.

The built-in FM radio works well too, producing surprisingly clear audio using just the headphone’s cable as an antenna. 88.3 Jia FM listeners may be disappointed to hear that we weren’t able to pick up stations below the 89.0MHz band, but otherwise, the M7 was able to receive all our other local stations fairly easily (and clearly).

To really get the DAP tested using our personal set of tracks, we started off with Sweet Child O’ Mine by Guns N’ Roses. We thought the M7 gave us an energetic rendering of this classic track, with the guitars in the piece ringing out nicely. Needless to say, the frenetic solo in this epic piece was enjoyable.

Moving on to a jazz standard in Call Me Irresponsible by Michael Buble gave the M7 a chance to show off its ability to image the lower spectrum as it picked out the bass guitar and the saxophones in the piece quite easily with good body to the lower ranges, providing the perfect backdrop to Buble’s vocals.

We then slowed things down by moving to a recording of Spanish Harlem by Rebecca Pidgeon, and found that the player did a great job providing a sense of atmosphere to the piece, rendering Pidgeon’s haunting vocals well forward of the backing instruments while providing enough clarity to clearly make out the shakers behind.

Finishing off with Hotel California by The Eagles, we were impressed by the detail the player was able to render, and with its stereo imaging capabilities. You feel like you're right there in the crowd, with the band playing in front of you. We'd say the player creates a medium-sized soundstage that's great for live recordings. 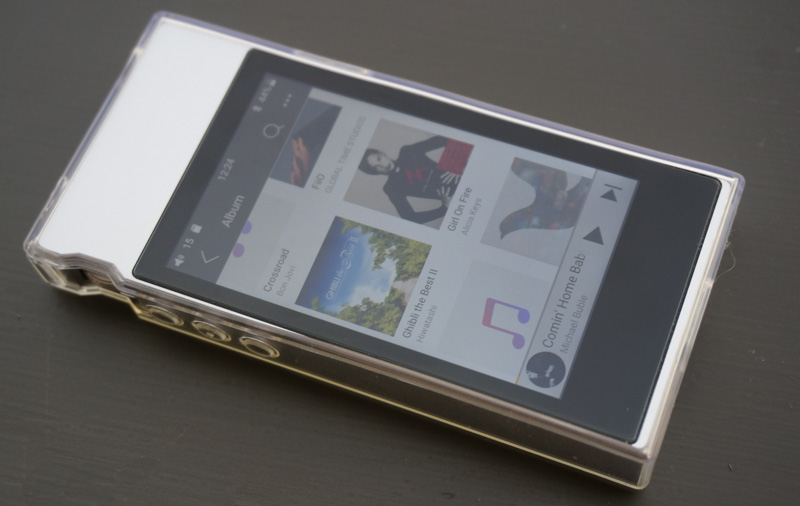 Given the affordable price point of S$329, there's little not to like with the FiiO M7, other than perhaps the slightly slow start-up time, the lack of support for streaming music services and the inability to add apps. The large number of music formats the M7 supports means you'll quite easily be able to bring your music library with you on the go, no matter what file type it might be. The physical controls also complement the touch interface well so there's nothing superfluous on the player. Simply put, it is a DAP that provides you quality sound by paring everything down to the essentials, and that's all you need. Definitely something that we would easily recommend if you don't need content streaming services.

Write a Review
Compare This | Specifications
Great interface
Good audio performance
Compact size makes it very portable
Addition of FM audio is a nice touch
Limited to onboard apps
No access to music streaming services despite being an Android based player
Our articles may contain affiliate links. If you buy through these links, we may earn a small commission.
Sponsored Links