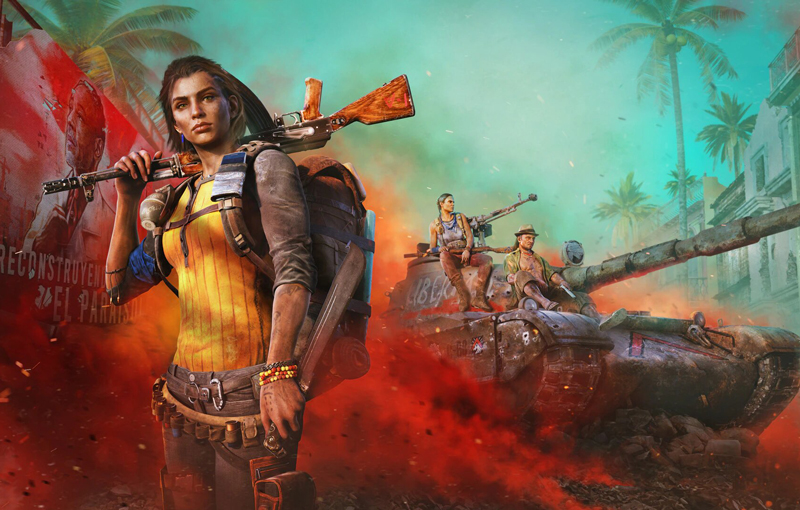 Do you know what the definition of insanity is?

As a certain villain once explained between an abundance of expletives, insanity is doing the same thing over and over again and expecting things to change. Far Cry 6, Ubisoft’s latest entry in their action-packed first-person-shooter franchise, reminded me of this monologue many times as I played through it. I love the Far Cry franchise dearly. Much like Doom, it thrives on a formula I just can't seem to get enough of.

Unlike Doom however, the Far Cry franchise doesn't seem to know where to go next, with each entry improving on its predecessors but by no means growing beyond them. Far Cry 6 is the latest example of this, a game that buildings upon Far Cry 5 in small and meaningful ways, but otherwise resembles the same game I’ve played four (or more, counting spin-offs) times in a row. I still had a ton of fun sparking revolution in the island of Yara and taking the fight to its El Presidente, but I do think the Far Cry formula is beginning to go stale. Far Cry games take players to foreign and exciting lands, where they often overthrow larger-than-life villains and cause as much chaos as they can along the way. Things are ever so slightly different this time. Far Cry 6 introduces you to Yara, a tropical paradise frozen in time - Cuba in all but name - ruled by the notorious ‘El Presidente’, Anton Castillo. Castillo holds a cruel dictatorship over the island, recruiting its citizens to join his violent army as he strives to push Yara to new frontiers at all costs.

Unlike past games, you don’t play as a foreign visitor struggling to get the lay of the land - you play as Dani Rojas, a native Yaran who’s already well-versed in its troubles. Not all of Yara’s citizens are taking Castillo’s regime lying down, and so enter a slowly-rising revolution fueled by guerrilla fighters struggling to wrest control of their island away from Castillo’s forces. Dani is initially reluctant to join their cause, but a tragic event pushes her into the heat of an all-out war for Yara’s soul.

Dani feels like a massive step in the right direction for this franchise. Growing up on the island lends her fight much more personal stakes, and it's easy to root for her. Her personality also shines through much clearer than past protagonists, as you can actually see her interact with the game's colourful cast of characters during third-person cutscenes now. Personality-wise, she’s a breath of fresh air. Dani feels like a fully-formed character from the get-go as she sings out loud during long car rides, curses out people when she's treated rudely and laughs maniacally while burning down fields of tobacco. For once in this franchise, it feels like the story's protagonist is just as interesting as its villain. Let’s talk about the villain, then - Anton Castillo. Modeled after and voiced by Giancarlo Esposito, most will recognise him as Breaking Bad and Better Call Saul’s Gus Fring, or The Mandalorian’s Moff Gideon. Esposito has a history of playing villains boiling with a quiet rage beneath the surface, and he brings that same energy to Castillo but with a small twist. Instead of relying on his villainy to ground your adventures, the game instead hones in on Castillo’s relationship with his son Diego, and his determination to pass on his decidedly controversial values to the next generation.

Interestingly, Far Cry 6 decides to put its villain on a slow burn. You might be surprised to learn that Anton rarely interacts with Dani and her band of guerrilla fighters. In fact, he hardly seems aware of their existence most of the time. For the early chapters of this game’s story, you’re mostly trying to put together a revolt by taking down separate pieces of the regime. Castillo pops up here and there in cutscenes entirely detached from the main story, where he teaches his son how to lead Yara with an iron fist.

While I appreciate Far Cry 6 for trying something new with its villain, I do feel like this method of storytelling falls flat for the game’s first 10 to 20 hours. Giancarlo Esposito puts on a strong performance as Castillo, and it is fun to sneak into bases and see the ruthless dictator making speeches over radios and through TV screens. However, his absence in the main plot leads to an early game that feels fairly padded out. You go from region to region, meeting new faces as you execute missions for your guerrilla army, but the stakes feel low. Your only motivation to carry them out is the distant but inevitable showdown between Dani and Castillo, but that won’t happen until much, much later in the game. The core Far Cry gameplay loop remains untouched: get better gear, take down bases and navigate a massive map filled with enemies who want to kill you. That's what you pick up a Far Cry game for, so that's not necessarily a bad thing. In fact, I believe the few tweaks Ubisoft has made here are for the worse. We’ll start with Yara - the biggest Far Cry playground ever. Its size is more relative to a country than a small island, but it wasn't as laborious to explore as I thought it'd be. Ubisoft has mapped out its regions and activities intelligently, so that you’re constantly finding new environments in Yara and new things to do everywhere you look.

Icons are strewn about the map like spilled salt, but they’re actually quite worthwhile to pursue. Far Cry’s enemy bases are the best part of the game like usual, with each base constructed and populated like dangerous puzzles. Do you take the stealth route and take your time liberating each base without any alarms going off? Or do you go in guns blazing and fight to survive? Each method has its pros and cons, but they’re both well-balanced and equally fun. This is also one of Ubisoft's more polished releases recently compared to Ghost Recon: Breakpoint, but I did notice some strange glitchy animations and broken enemy AI here and there.

Right off the bat, Dani is equipped with a backpack weapon called a Supremo, which acts like an ultimate ability with a long cooldown. The Supremo can fire poison gas, rockets and more depending on your loadout - but it surprisingly doesn’t feel overpowered. Yara’s troops are incredibly intimidating, packing powerful weapons and body armour from the get-go - so the new tools you have at your disposal match that threat level nicely. Adorable animal friends called Amigos also help you out, ranging from a violent crocodile to a sweet little puppy named Chorizo. There are other things to do in Yara beyond capturing bases. There are traffic checkpoints impeding land travel, which act as mini-bases to liberate. There are air defense stations impeding air travel, and they also act as mini-bases to liberate. Ubisoft certainly knows what fans want from this series, I’ll give them that. My favourite side activity however, has to be the treasure hunts. Much like Far Cry 5’s Prepper Stashes, you’ll occasionally stumble onto opportunities to find better gear in these winding quest lines. Sometimes it can be as simple as chasing down a feral mongoose throughout a village because it's eaten the key to a treasure box, and other times it involves solving a series of puzzles. All of these quests feel like fun detours from the main story, and they don’t just reward you nicely for your time - but offer another layer of insight into Yara and its people.

Far Cry 6 improves on gameplay in relatively simple ways. Vehicle combat is now theoretically possible if inadvisable, with a variety of weapon and battering ram upgrades now available for Dani’s vehicles. Most vehicles in this game still control like trash though. You will find friendly bases scattered throughout Yara, with the option to upgrade them using a small choose-your-adventure style minigame that involves you sending out troops for timed missions that reward materials. If you’ve played Metal Gear Solid 5, you'll find all these very familiar. There’s even a cockfighting minigame that plays out like a surprisingly fun fighting game (though PETA has a few words to say about this). You also have new Revolver weapons, which aren’t actually revolvers, but their own class of handcrafted weaponry acquired by finding uranium.

In other, more egregious ways, Far Cry 6 departs from series conventions. The number-one complaint I have about this game is the lack of a skill tree. In past Far Cry games, you could level up, earn Perks and unlock upgrades that would allow the player achieve quieter footsteps, faster sprints and so on. The entire system is absent here, and Dani instead gets specific buffs through wearables like wristwatches and boots. Far Cry fans will likely appreciate Far Cry 6 - it’s more of the same, and that’s not necessarily a bad thing. In many ways, liberating Yara feels like the most evolved and finely-tuned adventure in the series yet. It balances the inherent silliness of alligators in T-shirts and wearable rocket launchers with a gritty, dramatic tale of oppression and responsibility. None of it is executed perfectly though. Player progression has its faults, and the story is haphazardly paced. But it is good fun, and it kept me coming back for more. That said, I can definitely see fans not being as excited to jump into this entry however, as there is precious little separating one Far Cry game from the other at this point.

Write a Review
Compare This | Specifications
Refined weaponry
Amigos are very very cute
Antagonist and setting are much more interesting than the last Far Cry
Treasure hunts are a lot of fun
Supremos are an interesting addition
Lots of potential for silly chaos
Fairly slow early game
Castillo is quite wasted as a villain
Small glitches here and there
No more skill trees or Perks
Doesn’t evolve much on the Far Cry formula
Our articles may contain affiliate links. If you buy through these links, we may earn a small commission.
Sponsored Links